So last week was kind of a drag, right? Lackluster Week was no fun, and kind of got me worried that I was in for some bleak times in the coming months. But apparently the Simpsons Gods have smiled upon me, because let me tell you, this coming week is pretty solid. There’s still some stuff that I have issues with, but by and large we’re in for a week of episodes that were fairly decent. And it all starts with this incredibly weird and complicated episode.

Things start off by establishing that it’s wintertime in Springfield by showing snow falling on the town, before giving us a really weird Ice Age parody. We see that squirrel-thing from those movies trying to get an acorn from a tree, only to be murdered by Willie. And after that lovely little tableau we skip around Springfield, seeing people waking up and getting used to the snow, including Homer, who apparently slept outside and was buried under the snow.

Homer gets himself out of the snow bank and wanders back home, having apparently been gone all night. He’s worried that Marge will be mad that he was gone all night, but he runs into something odd. She’s not there. Neither are the kids. The whole house appears to be empty. Well, except for Santa’s Little Helper, who is incredibly hostile towards Homer, and tries to bite him. So that’s pretty odd. Oh, and Homer has already realized he has no memory of the previous night.

So Homer starts to retrace his footsteps, and heads over to Moe’s to see if he can figure out what he did the previous night. And it turns out that Moe has a lot of answers. Apparently last night Homer showed up to the bar, asking Moe to make him forget something he did. Moe then created some powerful shot, involving the venom of some sort of memory moth, and gave it to Homer. Moe explains all of this, and the fact that the shot erases your previous 24 hours, but doesn’t seem to know why Homer needed the shot.

But someone else at the bar does. Chief Wiggum is inside the bar, and he tells Homer some of what happened last night. Wiggum explains that he was called to the Simpson’s house for a domestic disturbance, and found Marge with a black-eye, claiming that nothing happened and that she just walked into a door. When Wiggum tells him all of this he gets a brief flash of memory, and starts to fear for the worst. 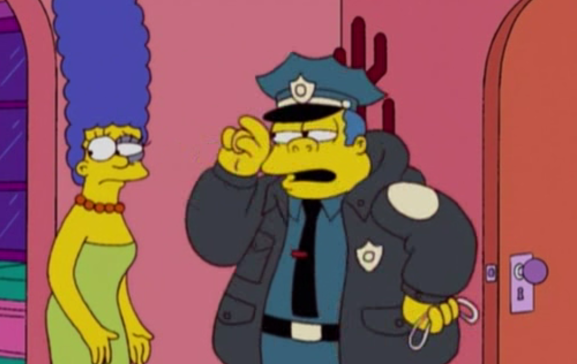 Homer returns home, terrified that he may have assaulted Marge last night, and tries asking Ned what happened. Ned doesn’t really know what was going on; he just heard yelling and called the police. So Homer goes into the house, and gets another flash of a memory. Basically it’s just him coming home and hearing Marge begging him to stop doing something. Which sure doesn’t seem like a good sign, and Homer is really starting to panic.

For some reason Homer decides to go to the Retirement Castle to talk to Grandpa, and get his advice on remembering things. Grandpa doesn’t really have any good ideas, but he does tell Homer that Professor Frink has a procedure that can make people relive their memories. So Homer drives over to Frink’s lab, which is mainly full of old people trying to remember their youth. But Frink does think that he can solve Homer’s problems. So Homer gets strapped in, and begins being able to float through his memories.

At first he’s unable to figure out how to operate the process, and he ends up going to the wrong memory, him playing with the kids and having them sled into a snow sculpture competition. This is a nice memory, but he has business to attend to. So he goes through his memories, passing a bunch of stills of previous episodes, and finds himself in the previous night. He comes home and finds Marge and some muscle-bound man on the couch. The man’s face is blocked by a bottle of champagne though, and the memory is unable to proceed. So Homer is stuck again.

But he figures that if there’s anyone who can solve his problem, it’s memory Lisa. So Homer returns to that sledding memory, and picks the kids up. After a brief stop for Bart to beat up 10 year old and 20 year old Homer, they make it to the evening memory. They find that they can’t manipulate the memory into showing who the man is, but that if they just start kicking things they can jostle the memory loose. This works and Homer is able to find that the man was Duffman, who definitely appears to be sleeping with Marge. 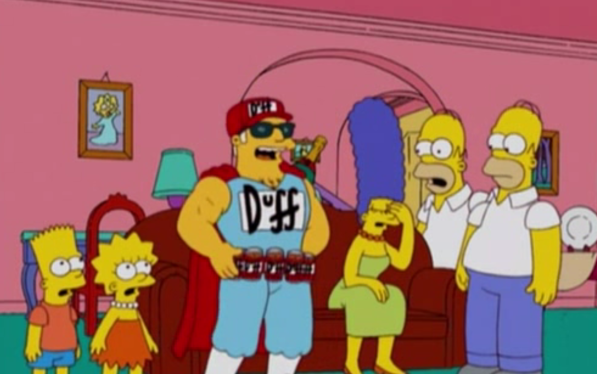 So Homer yanks himself out of the memory machine, convinced that he saw Marge having an affair last night. He’s pissed, confused, and depressed, and doesn’t have any idea what to do next, but he storm out of Frink’s lab and ends up finding himself at a large Suicide Bridge outside of town. He stands atop the bridge, in the snowstorm, thinking about killing himself. When Patty and Selma show up, and decide to push him off the bridge.

Homer begins falling to his death, and like in all cartoons he gets to see his life flash before his eyes. It’s primarily just a gag on those YouTube videos where people take pictures of themselves for years, but it mainly serves to show how depressing Abe’s life was. However, once his retrospective is over Homer’s memory decides to throw him a bone and give him full access to the previous night’s memory, solving the mystery once and for all.

Turns out that what actually happened was that Homer came home, and found Marge and Duffman together. But they weren’t having an affair; they were planning a huge surprise party for Homer. Duffman was there to provide the alcohol and the Duff champagne. And when Duffman tried to open the champagne it smashed Marge in the eye, causing the black eye. So it was all just a huge misunderstanding! But Homer is still falling to his death.

Until Homer smashes into a bouncy-castle that’s sitting on the deck of the Duff Beer Party Barge! Yep, this was all part of the plan! Homer finds out that this is his surprise party, and all of his friends and family are on the barge. Apparently when Homer learned the truth about his party he went to Moe to get the memory-erasing shot, and then asked them to make sure that there was a bounce-castle on the barge so that when he tries to commit suicide he’s live. We then wrap up some loose ends, like the fact that Marge lied to Wiggum because she didn’t want Sarah to come, and that Santa’s Little Helper just hates him. 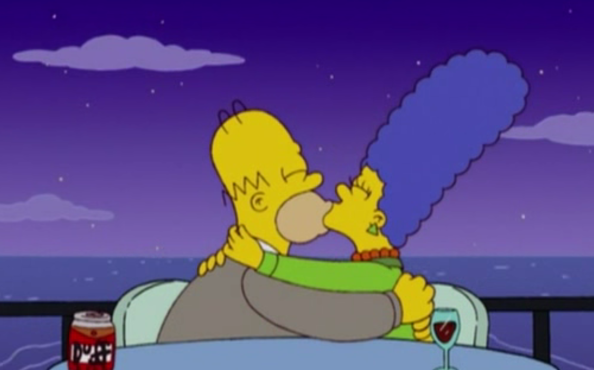 I thoroughly enjoyed this episode. It’s incredibly weird, and goes to some really strange places, but it’s a whole lot of fun. Having this Memento-style mystery was certainly something I hadn’t seen before on this show, and it was a lot of fun trying to see Homer solve the mystery of his missing night. There are obviously some weird factors, like the whole Santa’s Little Helper thing, but I think by and large they wrapped up all of the lose threats, and made it make sense. I will say that the whole “memory bubble” thing was a little strange, and kind of strained the credulity of the episode, but whatever, it was fun and goofy. There were some solid gags in the episode, and it actually had some good acting from Dan Castellanetta while Homer was terrified that he had done something horrible to Marge. But in the end this is an episode that’s actually trying to do something different, which I haven’t seen from the show lately, and it was a great experience.

Take Away: Surprise parties aren’t so important that you start abusing moth venom to destroy your memories.

“Eternal Moonshine of the Simpsons Mind” was written by J Stewart Burns and directed by Chuck Sheetz, 2007.

Tagged as: 2007, Eternal Moonshine of the Simpson Mind, Lifetime of Simpsons, Season 19, the Simpsons