We had a run of episodes a couple seasons ago that were pretty lackluster to actively bad. But then Season 18 had a spate of pretty fun and enjoyable episodes that made me think things were going to start turning around. The Simpsons Movie is wonderful, and I was starting to get my hopes up that maybe there was another solid era of the show coming up. But so far Season 19 is disproving that pretty handily. Because we’ve had clunker after clunker so far this Season, and that appears to show no signs of stopping. So let’s have a fun week of episodes that are almost completely forgettable and utterly bland!

Things start off with Homer walking into his bedroom to find Marge dressing Bart up in a little tux. Homer is curious why Bart’s getting dressed up, but doesn’t want to admit that he doesn’t know what’s going on. So he just bluffs and finds out that tomorrow Lisa is getting an award at the Elementary School for Student of the Millennium. Why Bart is getting dressed up the day before the event, I have no idea.

What does matter is that Marge warns Homer not to miss this, because it’s going to be a huge deal. So after some complaining Homer decides that he should be a good father. The next morning Homer wakes up incredibly early, grabs Maggie, and heads over to the school so he can get there before everyone else, and wait for hours for the ceremony to begin. But Homer doesn’t care, because he’s going to be able to rub it into Marge’s face.

Meanwhile, we see that before heading over to the school Marge is going to stop at the bank. She’s pretty frustrated that there’s a huge line in the bank, and starts complaining about it to the guy in front of her. He commiserates with her, then makes things much worse by robbing the bank. Yep, Marge just got stuck in a bank robbery. And the guy in front of hers partner, looking like John Cazale from Dog Day Afternoon joins the show and they start holding everyone in the bank hostage, Marge included. 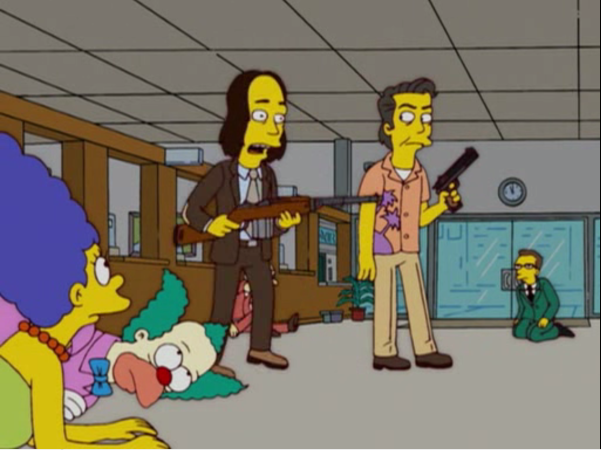 And things escalate when Gil comes strolling in as the new security guard, and is shot before Cazale. He then freaks out, and runs from the bank, leaving the first guy, whose name is Dwight, behind, while also drawing the attention of Chief Wiggum, Eddie, and Lou. Which is right when Homer gives Marge a call, to figure out why she’s not at the ceremony, and Marge tells Homer what’s going on, and even has to say goodbye, just in case things go even further south.

Marge and the rest of the captives try to talk Dwight down, but he continues to get more and more agitated, especially when he just starts being blasted with ink packets. But he’s also getting frustrated with the whole robbery, which allows Marge to try and connect with him. And it works. Dwight says that he’ll give up, as long as Marge promises to visit him in jail once he’s arrested. She’s a little creeped out by this request, but the other captives convince her to agree so that they can all leave intact.

So Marge agrees, and Dwight gives himself up, allowing himself to be arrested. And almost immediately Marge begins doubting her decision, becoming terrified that she agreed to see this creep again. Which leads to her starting to come up with excuses not to visit Dwight as soon as she can. She just keeps coming up with more and more ridiculous excuses, which really starts to piss of Dwight. Especially when we pan to him in prison and learn that he has some crazy abandonment issues ever since his mother literally abandoned him at an amusement park when he was a kid. 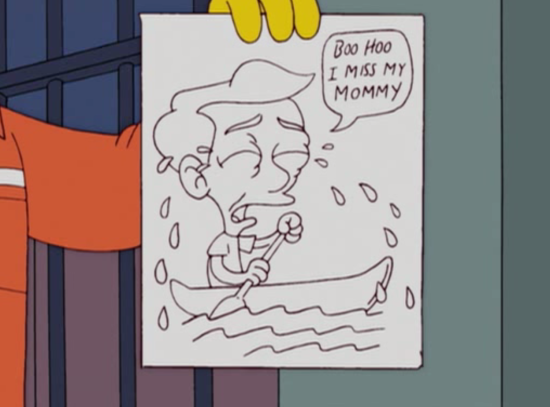 That abandonment starts to fester in Dwight, which happens at the same time that Marge is watching some movie about a convict. She becomes incredibly invested in the convict’s story, especially when he’s executed without anyone being there for him, which makes her realize the error of her ways. Unfortunately while that’s happening Dwight has escaped from the prison by clawing his way out of a sewer. So that’s not good.

Back at the house the kids are watching an Itchy and Scratchy episode all about steroid abuse when they get a breaking news alert from Kent Brockman about Dwight’s escape from prison. And Marge is justifiably terrified. So she starts going through her life, terrified that Dwight is after her, which he is. We get a weird montage where Dwight continues to stalk Marge throughout Springfield, getting closer and closer to her.

And it culminates when Marge comes back to her car after shopping for groceries, and Dwight gets in the car, holding a gun. Marge obviously freaks the hell out, but she plays along with him, driving to an amusement park that he wants her to. It’s apparently the same one that his mom abandoned him in, and he just wants to have a good day with a maternal figure who won’t leave him. And, you know, guns usually help with that.

So Marge and Dwight get to the amusement park, and begin having an awkward day, when things start to fall apart. Mainly because Dr. Hibbert and Krusty, who were also captives at the bank, recognize Dwight and Marge, and freak out. They go get Chief Wiggum, who is also in the park, and he goes to try and save the day, hoping to catch Dwight on the Viking longboats. That is until Wiggum slips and becomes trapped on the ride, causing Dwight to be a hero…and fall into the gears of the ride, stopping it. Dwight is still alive though, so he’s sent back to prison, and this time Marge actually visits. 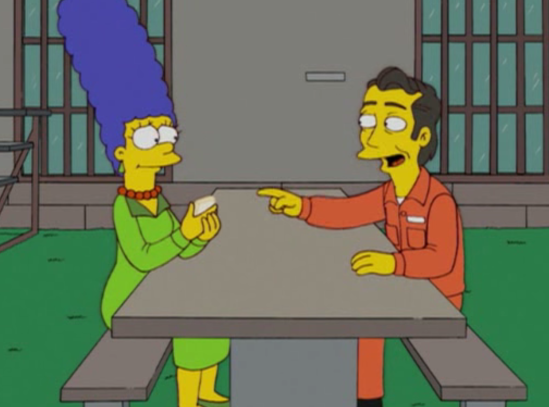 I’ll be real with you, I watched this episode while getting over a pretty powerful stomach flu, so maybe that colored my opinions of this episode. But as it stands, this episode was just a complete nothing. The idea of Marge being psychologically scarred by a traumatic event like being involved in a bank robbery, and then being stalked by a convict, should have been a really interesting premise. But there’s something about it that’s just so dull. And I’m thinking it’s either the fact that it’s too silly and episode to take care of such a weird and dark premise, or the fact that they made Dwight so incompetent and so much of a sad-sack. There’s just something about those two choices that strip anything interesting away from the episode, and make what should be a thriller episode of the Simpsons into a weird slog. Just not my cup of tea.

Take Away: Don’t befriend the guy who held you hostage.

“I Don’t Wanna Know Why the Caged Bird Sings” was written by Dana Gould and directed by Bob Anderson, 2007. 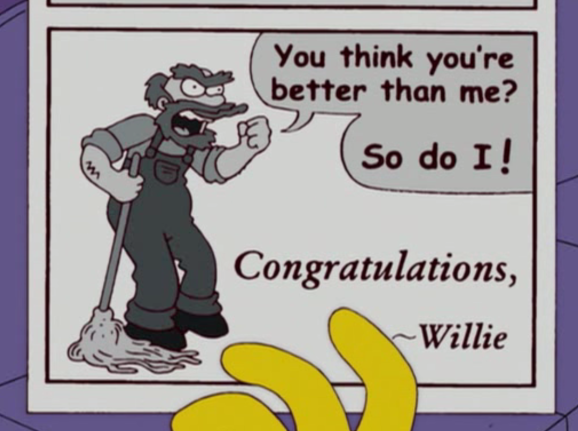 Tagged as: 2007, I Don't Wanna Know Why the Caged Bird Sings, Lifetime of Simpsons, Season 19, the Simpsons