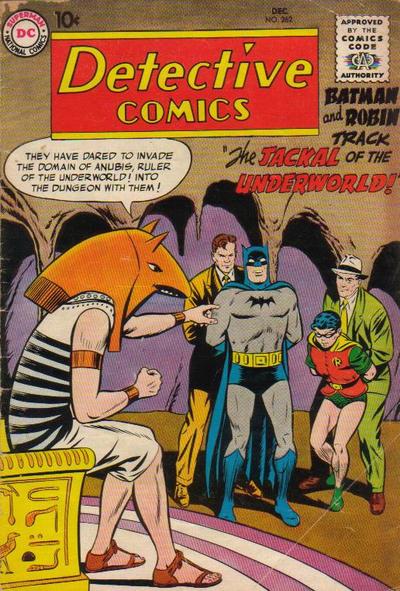 Howdy everyone and welcome back to another installment of Bat Signal, my ongoing quest to read random issues of Detective Comics with little to no context of what’s going on in them. And right away I got pretty excited about this issue. One of my favorite issues that I’ve come across on this project was one when Batman and Robin went back in time to meet Cleopatra and help her solve crimes through the use of “Chronal hypnosis.” It’s one of the most enjoyably insane comics I’ve read, and when I happened to pull this issue and witnessed a man in an Anubis mask yelling at Batman and Robin, I got pretty excited. But closer inspection of the cover, and then actually reading the issue, made me realize that this wasn’t really the type of story I was going to be getting. And yet, this story is plenty enjoyably insane on its own merits. Nowhere as crazy as if I had learned that Batman and Robin had traveled back to Ancient Egypt yet again, but trust me, this issue gets wacky. As you would expect when it features a guy dressing like Anubis.

The issue begins with two archaeologists entering an Egyptian tomb with a fancy bust of Anubis. There’s the elderly Dr. Coombs and the younger Dr. Gibson. They take the bust of Anubis and then bring it back to Gotham where Dr. Gibson gives Batman and Robin a private viewing. The Dynamic Duo are very impressed with all the artifacts, but are a little concerned when they go into Dr. Coombs’ office and find him standing there talking to himself while wearing the Anubis mask. So that’s a little concerning. Coombs insists that he just does that when he’s writing about Anubis, to get in the mood, which I guess Batman and Robin buy. Coombs then shoos Batman and Robin from his office, and Gibson starts to tell Batman and Robin that he’s starting to get worried about Coombs, which Batman promises to keep an eye on. And lo and behold they get a chance that night when they see the Bat Signal and are brought to the museum. And when they get there they meet with Gibson, who tells them that Coombs has gone mad, started wearing the mask nonstop, and has labeled himself the King of the Underworld. So that’s worrying. But what brilliant plan will Coombs come up with? Yeah, he’s just hiding in one of the sarcophagus’ and he leaps out and knocks the guard out. And when the guard is taken care of the guy in the Anubis mask grabs some priceless artifacts and begins plotting about his future of crime, when the guard presses a security alarm button. This sends a signal to Batman and Robin, who race to the museum and manage to corner the man in the exhibit. Unfortunately for Batman and Robin though the man seems very well acquainted with the exhibit, and manages to flee from the Dynamic Duo while leading them into some sort of fumigation room where the artifacts are brought to clean. Batman and Robin are locked in the room and are gassed. And while Batman and Robin smash their way out of the fumigation room so they don’t suffocate the man in the Anubis mask escapes and heads into Gotham City. And since he’s managed to best Batman and Robin he’s quickly able to convince a lot of goons to start following him.

So a crime spree begins! And guess what people start calling this criminal? Anubis? Apparently too on the nose. Maybe the Jackal? Close, but no cigar. For some reason this criminal begins being known as Jackal-Head. Sure, why not. Anyway, Jackal-Head and his goons begin committing all sorts of crimes across Gotham, all of which involve them utilizing Jackal-Head’s knowledge of the underground. And despite Batman and Robin’s best efforts, they just keep failing to catch Jackal-Head and his goons. They even have a high-speed boat chase through the sewers, and still fail to apprehend the criminal. Which is really starting to worry Gibson, who once again explains to Batman and Robin that he’s worried for Coombs’ safety, and that he’s just a poor old man in need of psychiatric help. But that will require Batman and Robin to find the villain. They just need to figure out what his next move will be.

Oh, well that’s handy. So yeah, both Jackal-Head and Batman hear about a recently discovered shipwreck that more than likely contains some treasure. So Batman and Robin race off to the shipwreck, only to find Jackal-Head and his goons have already robbed it, and are getting into some sort of crazy vehicle that will keep them pressurized when they leave the wreck. The Dynamic Duo begin fighting with Jackal-Head’s goons, trying to stop them from escaping, but things don’t end that great. Because when the battle starts to turn for Batman and Robin, so Jackal-Head uses some sort of cannon on his crazy vehicle to cause a rupture in the cave they’re in, sending Batman and Robin flying up through the cave and into the bay. Luckily the two are picked up by some sailors who bring Batman and Robin to a decompression chamber so that they don’t get the bends. And while they’re inside the chamber Batman begin putting things together, and makes a bit of a realization on how to find Jackal-Head’s hideout.

We then cut to Batman and Robin entering a cave where Jackal-Head and his goons are waiting. However right when they start planning on attacking Jackal-Head they’re attacked by some goons, and taken captive. They’re then dragged to a brig and tossed in with Dr. Coombs. *Record Screech* That’s right, Jackal-Head isn’t Dr. Coombs, it’s Dr. Gibson. He faked Coombs’ insanity the whole time, and has become a new criminal mastermind all thanks to the perfect patsy. Batman apparently figured this out, and followed Gibson from the museum, so that’s how they found the base. And after some monologuing Gibson leaves Batman, Robin, and Coombs in the cell and heads out to commit crimes. However, right as Jackal-Head leaves Batman is able to free them from the cell by lassoing the key (just go with it) and then they’re hot on the Jackal-Head’s heels. They follow the criminals to a nearby subway where a train carrying money is passing by, and start fighting with the criminals. And after a lot of scuffling Batman is able to get the upper-hand and knocks Jackal-Head out, ending his short-lived reign of terror and apparently taking the price-less Egyptian artifact for himself.

Listen, I was certainly a little disappointed that this issue didn’t have Batman and Robin going  back in time and fighting with the actual Anubis, because that’s the kind of goofy nonsense that this series was known for from this era. But despite that little disappointment this was an incredibly fun comic. I like that the beginning of the issue supposes that we’re in for a story similar to the Adam West Batman TV show with King Tut, with an archaeologist thinking that he’s a reincarnated Egypt-themed villain. Although it’s fairly obvious from the beginning that Gibson is the bad guy and he’s framing Coombs. But whatever, we get some fun Batman and Robin action while trying to stop a ridiculous flavor-of-the-month villain, who just so happens to have the dumbest name possible. I mean, seriously, Jackal-Head? That’s what they went with? That makes no sense. And yet, it was a weird and fun little mystery that’s exactly the type of story I look forward to from this period of Detective Comics.

“The Jackal of the Underworld!!” was written by Dave Wood, penciled by Sheldon Moldoff, and inked by Charles Paris, 1958.