There sure seems to be a lot of episodes from this era of the Simpsons that are almost completely forgettable. We’re now fully in the years that I never saw, so I’m seeing all of these episodes for the first time, and I’m shocked that I keep coming across episodes that I watch and then virtually have no memory of when I write the article. And guess what, we’re ending this huge week of Lifetime of Simpsons with one such case.

The episode starts off with Marge trying to put Maggie to bed. And it isn’t going well. Maggie is incredibly fussy and doesn’t want to be put to bed, mainly because she wants to be down in the living room with Homer and the kids, who are holding some sort of toga party, as if they were a frat having a kegger. And Maggie really wants into that party. Marge keeps trying to distract Maggie, but it just won’t work, and she finally has to give up.

So Marge heads downstairs with Maggie, hoping to give her some milk which may make her sleepy. But Maggie continues to be ridiculously fussy, and she squirms around in Marge’s arms until the bottle of milk is dropped, and shatters on the floor. So now there’s an emergency, and Marge sends Homer out into the night to pick up some more milk. And this proves much more difficult than you would expect, because teenagers have bought all the milk in Springfield to make jet-pack fuel, and all Moe has is a glass of white paint.

While Homer scours the land for milk, we see that Marge is still at her wits ends with Maggie, and decides to go online and see if there’s anything there to help. Bart and Lisa then mock Marge’s lack of computer skills, and eventually get her to some website offering to send a counselor over to their house to teach both Marge and Maggie how to be more self-reliant. And after some consternation from Marge, she decides to go through with it and makes an appointment with the counselor.

Meanwhile, Homer has still been driving around all night, trying to find some milk. And he eventually comes across a town called Guidopolis, which appears to be home to solely Italian stereotypes. So Homer pulls over and runs into a Kwik-E-Mart to get some milk, only to find that his car is being towed. So Homer runs out of the store, and ends up yelling at the tow-truck driver Louie. Louie refuses to give Homer a pass, although he does let him ride in the truck to the impound lot.

And while the two drive to the lot we begin to see Homer and Louie hit it off. Homer is fascinated with the job of tow-truck driver, and Louie ends up selling it pretty well. He tells Homer that he’s his own boss, and that it’s basically the best job in the world. And since Homer is famously fickle and loves to pick up random new jobs, he asks Louie if he can become a tow-truck driver too. Louie agrees, sells Homer a tow-truck, and gets him set up, just as long as he agrees to stick in Springfield, and never pick up cars in Guidopolis.

So Homer is now a tow-truck driver, and he begins traveling around Springfield, picking up cars. Although he mostly just destroys them. He also does a ridiculous thing where Bart holds onto the tow while skateboarding, which seems ridiculous. But after a while of screwing up Homer finally gets used to his new job, and starts doing it very well. He starts making a lot of money, and ends up towing cars constantly.

Homer’s doing pretty good with his new job, but what’s going on with Maggie and Marge? Well, the counselor has arrived and proven that Marge coddles Maggie far too much. She tries to teach Marge, and Maggie, how they should actually be acting, and she ends up being a huge success. After not much time at all Maggie becomes completely self-reliant. Maggie begins doing everything for herself, and this quickly starts to make Marge feel useless and depressed.

Meanwhile, Homer’s tow-truck business has been booming, to the point where he’s rolling in money, and buying the barflies some sort of lobster martinis. However, while Homer is having a great time becoming the tow-king of Springfield, the rest of the town isn’t as happy. In fact, they’re pretty furious at Homer and his overzealous attitude towards towing. He’s even turned the family front-lawn into his own impound lot.

So the people of Springfield decide that Homer has gone too far, and they meet up at Moe’s to bitch about Homer, and decide what to do. And after a lot of complaining, Agnes Skinner speaks up. Apparently she has a lot of experience with tow-truck drivers, and knows how ridiculously territorial they are. So they come up with a trap to destroy Homer. They get a car, park it in front of a fire hydrant, load it up with tickets, and hide a Guidpolois sign so that it looks like it’s still in Springfield.

Cue Homer driving by, finding this car too good to believe. He pulls over, and begins towing the trap car, which is right when Louie comes driving by as well. And he is furious. He starts yelling at Homer, pissed that Homer would defy their territory. He then grabs Homer, sticks him to his tow, and begins driving him around Guidopolis, making sure to hit him against everything he can. And after he’s abused him enough, Louie drives Homer to his house, and locks Homer up in some crazy dungeon of his.

Yeah, this episode just escalated to a weird place. Louie has a secret dungeon in his house, which is full of rival tow-truck drivers who he’s kidnapped, and Homer is the newest entry. And Homer’s disappearance is really starting to appease the people of Springfield, who begin parking with abandon, quickly falling into parking anarchy. And this anarchy spreads until Springfield falls into total chaos, almost destroying the town.

Meanwhile, Marge appears to be the only person who cares that Homer is gone, and she begins struggling to figure out how to find him. Which is when Maggie, who is now completely self-reliant, decides to give it a shot. She sneaks out of the house, gets on Santa’s Little Helper, and rides him across town, finding Homer in the dungeon. Maggie then attaches Louie’s tow to the dungeon’s window, ripping it apart so that Homer and the other tow-truck drivers are free. So Homer is free, stops wanting to be a tow-truck driver, and Maggie decides that she enjoyed being babied, and stops being so self-reliant. 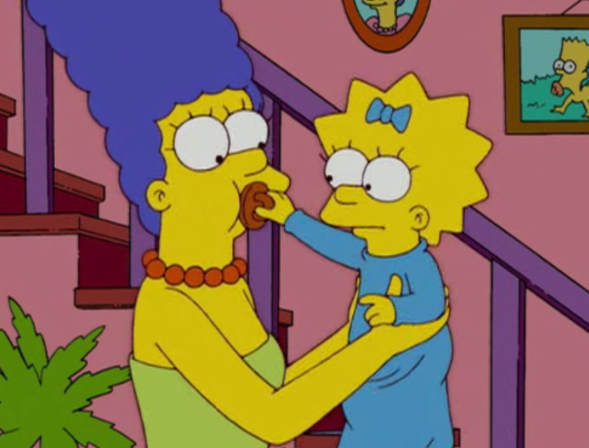 Yeah, I don’t know what it is about this episode, but it leaves next to no impression on me. We’ve seen Homer start some really weird and random jobs over the course of this show, but tow-truck driver is certainly an odd choice. You wouldn’t think that that would be rife for dramatic potential, and you would be right. Honestly, I think the episode showed some potential when Springfield fell into parking anarchy, because it got completely ridiculous. The premise of Homer getting a tow-truck is so dull, that I think it would have needed to be bolstered by some cartoony absurdity to make it work. But I don’t know, this episode was just a bit of a mess. I’m not even sure what else to say about it, because I’ve honestly forgotten this episode by now.

Take Away: Don’t mess with tow-truck drivers, they’ll lock you in their creepy dungeons.

“Midnight Towboy” was written by Stephanie Gillis and directed by Matthew Nastuk, 2007.

Tagged as: 2007, Lifetime of Simpsons, Midnight Towboy, Season 19, the Simpsons