Hi there everyone and welcome back to another installment of Bat Signal, my ongoing project to read random issues of Detective Comics with little to no context. And we have a fun and goofy little issue to talk about today. I usually get irritated when I pull issues that don’t have proper beginnings or ends, because they just come off as gibberish. However, today I got a special kind of middle-issue. One that is completely insane and hilarious given no context. It appears that the beginning and end of this story take place in Batman, not Detective Comics, so I will never get to the stories during this project, but that’s okay. I can figure what’s going on in this story well enough, at least to enjoy some absolute nonsense. I mean, check out that cover. The Joker is going to run over Batman in a train with his own face on it. And while that exact thing doesn’t happen in the issue, trust me, thing get equally if not more insane. We do kind of get a Joker that is rapidly approaching the uninteresting monster Joker that I hate so much, but he’s still pretty fun, and spewing weird puns. But I’m getting ahead of myself, let’s do this thing.

The issue starts exactly where you’d think it would. With Batman and Vicki Vale being held captive by a group of soldiers inside some sort of Joker Cave, while the Joker explains that he’s ready to take over Guatemala. Um, yeah, let’s just roll with it. The Joker has apparently built this Joker Cave inside of a Guatemalan temple, and he’s busy monologuing to Batman about all of his insane goals. Well, until one of the goons tries to tell Joker that it maybe isn’t a good idea to tell Batman their whole plan, which results in Joker killing said henchman with a giant jack-in-the-box. This results in the goon firing his machine gun wildly, which provides Batman a brief respite to try and come up with a plan to defeat Joker. Which is when we get some insight into what Joker is plotting. And it’s a doozy. Basically, he and an army of soldiers made up of Gotham criminals are going to overthrow the Guatemalan government and transform the country into a gigantic Joker-themed theme park, specifically modeled after Disneyland. I’m not kidding. 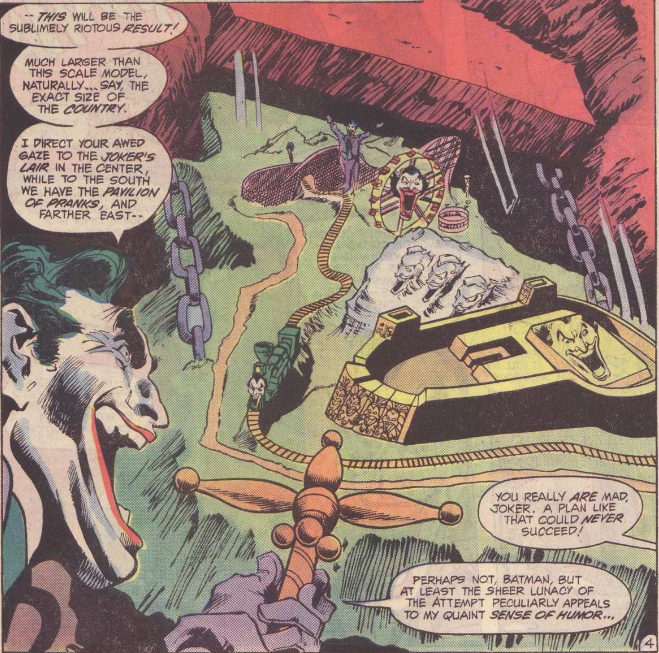 Yep. The Joker is going to take over a South American country and convert it into an amusement park. That’s certainly a unique plan. They don’t really explain why the Joker thinks that this is a good idea, why it has to be Guatemala, or really anything about the plan at all, but I assume this was perhaps covered in the previous issue. What we do know is that Batman is incredibly confused about the plan as well, and just keeps plotting ways to get out of this predicament while not actually doing anything. He just stands there, thinking and mocking Joker while he makes speeches. The Joker’s plan is basically to have his guys assassinate the leader of a rebel militia, and then sit back while the rebels assume it’s the government, leading to a full-scale war. And then, when both sides are weak, the Joker and his army of Gotham City thugs will defeat both the government and the rebels, and take over the country. More than a little convoluted, but I guess it’s feasible.

But before we get more into the Joker’s para-military theme park production we get a brief moment where we check in on some other plot strands that are going on in the comics, an that make no sense to me. First we see some apartment in Gotham City, where Alfred is delivering groceries to some young woman who we eventually learn is apparently his daughter. Then we go to a hospital in Gotham where Harvey Bullock and Barbara Gordon are hanging out in, waiting for Commissioner Gordon to come out of a coma. No clue why he’s in the hospital, but I’m sure he’s going to be fine soon. Anyway, we should probably go back to Guatemala, and see what the Joker and Batman are up to. Still just standing around talking about plans? 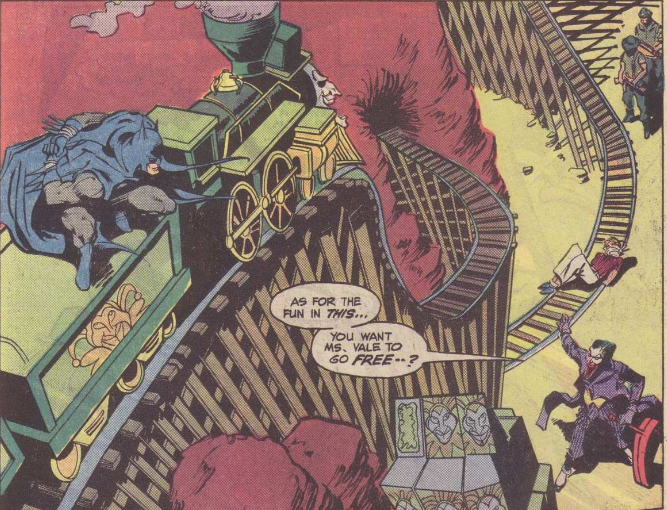 Oh my. Things have escalated rapidly in the brief respite from the main plot. Apparently Joker has tied Batman up, stuck him on the little train with the Joker’s face on it from the cover, and is planning on sending the little train on a course around the Guatemalan temple they’re hiding out in until it runs over Vicki Vale. Sure Joker, this was a good use of your time. But that doesn’t matter, because the Joker has set the little train in motion, and Batman is rapidly approaching Vicki. Which means he has to spring into action. And he immediately does. Because as soon as the train takes off Batman realizes that there are some stalactites in this temple (huh?) and he jumps into the air, grabs one, breaks it off, and uses it like a knife to cut his bonds, freeing himself.  Oh, Batman, is there anything you can’t do?

Batman’s freedom isn’t the end of his problems though, because the train is still rapidly approaching the tied up Vicki Vale, so he needs to figure that one out. Which actually doesn’t take that much work, because Batman just whips a Batarang into the pistons of the train, causing it to jam and buck off the tracks. The train goes flying through the air, missing Vicki, and plowing into the Joker and his goons. And with that Batman and Vicki start fleeing from the temple, which obviously means Vicki has to pick up a machine gun, apologize to Batman, and just start mowing down goons. Batman doesn’t seem overly irritated with this method however, and they two just keep running into the jungles of Guatemala, knowing that they have to warn the Guatemalan government about Joker’s insane plans. But the Joker isn’t going to give up. He’ll be back!

Yeah, I had a lot of fun with this issue. It would be interesting to learn why the Joker was in Guatemala, how he had an army of Gotham criminals, and why he thought creating a Joker theme park made any sense, but those aren’t things I’m allowed to know I suppose. And despite any of those issues, there was enough wacky nonsense in this issue to make it a whole lot of fun. I mean, the Joker seriously spent half of the issue just standing in a room with Batman, monologuing about his plots, but it didn’t even seem that tedious, because his plan was so insane. Plus, once we were done talking about Jokerland or whatever the hell he was going to call it, we got to see Batman outsmart the Joker while tied to a little train. That’s some Silver Age nonsense that I wasn’t fully expecting to see in an issue from the early 80s. The Joker would soon become the boring monster with no motivation that he is today, but at this point he was still somewhat interesting, and willing to play around with little toy trains, and not just beat a child to death with a crowbar. So I’m down with seeing the last gasp of fun Joker, especially in such an insane issue. 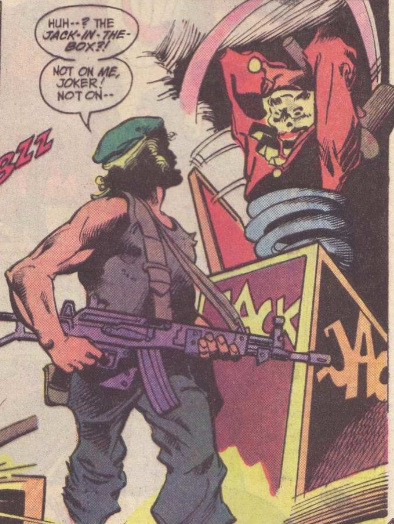