Hey, do you remember the episode “The Canine Mutiny” when that dog Bart bought, Laddie, became a police dog after he gave him up? Well what if instead of some random dog, this happened to Santa’s Little Helper? Apparently this.

Things start off with the Simpsons going to some sort of Harvest Festival, which Homer is incredibly depressed to find is not Oktoberfest. No beer, just a lot of vegetables. No one seems very thrilled to be there, but we get some sight gags, like a cornucopia competition, pine cone First Ladies, and forcing Bart to talk to a man making a wagon wheel as punishment. But none of that really matters, because things actually start going when they decide to go into a corn maze.

Which was a terrible plan. The family get trapped in the corn maze, and seem completely unable to find the exit. They wander around for hours, tossing Lisa up in the air to try and get a bird’s eye view of the maze, and nothing ends up working. They finally have to resort to splitting up in the hopes that one of them can escape and find help for the others. And this actually ends up being a good idea, because Marge, Lisa, and Bart manage to escape the maze.

Homer however, is not as fortunate. He’s completely lost and has basically given up hope, so they need some intervention. They call the police, who show up with their K9 unit, unfortunately the dog has just given birth to puppies, and is unable to be helpful. Bart decides that Santa’s Little helper, who has been in the car the whole time, can be used as a tracking dog, and they bring him to the maze to begin the hunt. They give Santa’s Little Helper some of Homer’s scent and he heads out, managing to find Homer and drag him out of the maze. 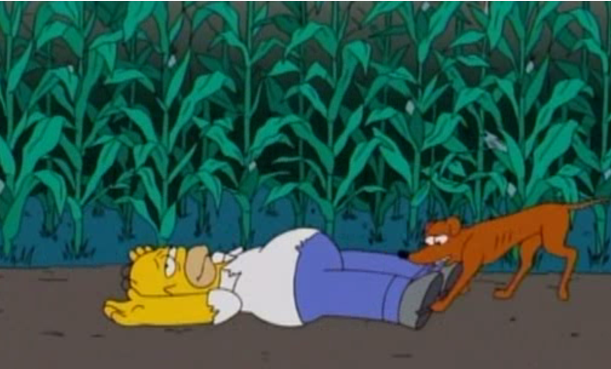 But Santa’s Little Helper apparently passes the class with flying colors, and becomes a member of the Springfield Police Department. He gets partnered up with Lou, gets a little bullet-proof vest, and hits the town. And they quickly run into their first call, when they see Brandine and Cleetus having a domestic violence incident where Brandine is firing a rifle at Cleetus while he’s hiding in a trough. This results in a bullet ricocheting off the trough and hitting Santa’s Little Helper’s vest, giving him his first taste of danger.

Santa’s Little Helper seems rattled about this, but Lou helps his partner out by going to a bar and having some beer together. So that partnership seems to be going well. And after that incident they decide to go on a sting, trying to catch Snake in the act of selling steroids to the bullies. They follow him to a park, and when they hear him say incriminating things they start chasing him, leading to a funky 70’s style chase through a playground until Santa’s Little Helper manages to catch him. 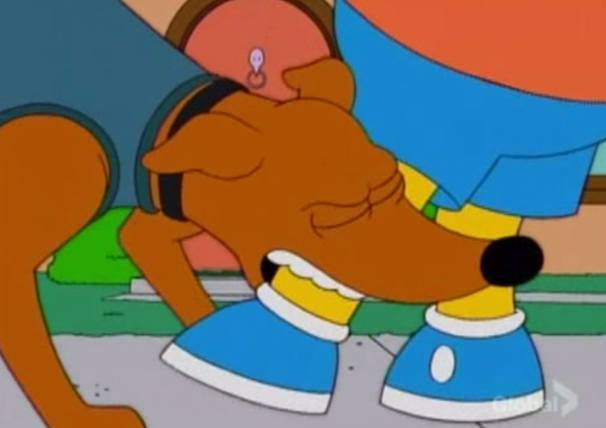 So that’s not good. The family are shocked at Santa’s Little Helper’s violent outburst, and they tie him up in the back yard so they can figure out what to do. The family agrees that they can’t deal with him being this mean, and Lisa suggests that he leaves the force. But apparently this isn’t an option, because instead they let him stay a police dog and have him live with Lou. Which seems okay I guess, they live in Lou’s depressing apartment and have a double date with some lady and her poodle.

Meanwhile, Bart is super depressed over losing his dog, so they decide to go get a new pet for him. The family head to a pet store, and after looking at all kinds of options, Bart decides that he needs a goddamn python. Everyone is terrified of the python, which Bart names Strangles, but he seems to like him quite a bit, especially when Strangles attacks Homer when Homer strangles Bart. That seems healthy I suppose.

Bart’s pretty pleased with his new pet, and even brings Strangles to school for a show and tell. Unfortunately Strangles gets out of the classroom after eating Martin’s rabbit, and is loose in the school. Mrs. Krabapple freaks out and sets off a “loose animal” alarm, causing everyone in the school to flee. They even call the police for aid, and guess who comes? That’s right, it’s up to Lou and Santa’s Little Helper to search the school and find Strangles. 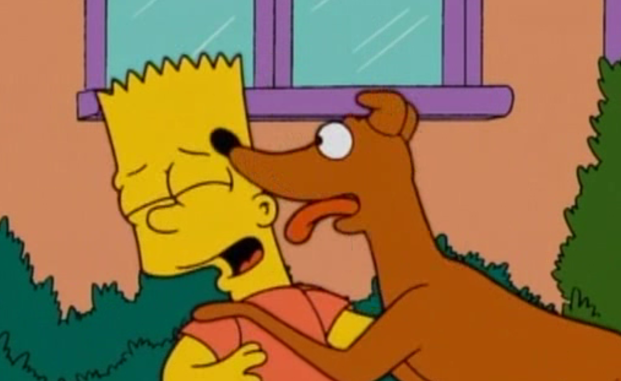 This episode is kind of on the bland side, but overall it worked for me. I’m typically a sucker for the Bart/Santa’s Little Helper episodes, and while there wasn’t as much emotional force in this one as others, it was still pretty sweet. I like the idea of Bart pushing Santa’s Little Helper into having a calling in life, only to then get sad when he’s good at it. Plus, all the stuff with Santa’s Little Helper being a burnt out cop whose about to snap was ridiculous and a lot of fun. Seeing him drinking with Lou and hanging out in a sad apartment while being mad about a botched court case is so silly, but I had a good time with it. I think the Strangles stuff was kind of strange, especially when they just abandon Strangles in a chemical infested Elementary School, but whatever. The rest is more or less fine, and ended up being a pretty fun episode.

Take Away: Don’t let your dog have a job, because it’ll really make him grouchy.

“Stop of My Dog Will Shoot” was written by John Frink and directed by Matthew Faughnan, 2007. 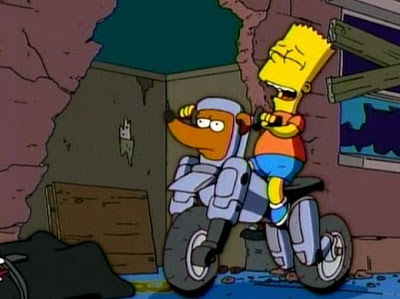 Tagged as: 2007, Lifetime of Simpsons, Season 18, Stop or My Dog Will Shoot, the Simpsons