Howdy everyone, and welcome back to another installment of Bat Signal, my ongoing quest to read random issues of Detective Comics. And look who has come to visit, it’s good old Edward Nygma, the Riddler. I’ve talked a lot about the Riddler here on the site, and I’m always pleased to see him make an appearance in the comics. He’s become my favorite Batman villain over the years, even though his issues can often be a tad tedious, since they require some ridiculous stretches when it comes to his riddles. But that doesn’t distract from the fact that Riddler is the best villain in regards to my favorite aspect of Batman, that of the World’s Greatest Detective. And this is a pretty fun issue. Although, much like most issues from the sixties this over is a real tease. I don’t really want to spoil things up top, but this little tableau doesn’t pan out like it does on the cover, and it ends up occurring like, halfway through the issue. But let’s not get ahead of ourselves, we have a lot of riddles to get through.

This issue really hits the ground running, and features an explosion on the first page. We start off with Batman getting a letter in the mail from the Gotham Library saying that a book he’s requested, Science and Crime Detection, is available for him to pick up. This confuses Batman, who did not order this book, but he decides to check it out, and heads over to the library. And the plot thickens when he gets there, because the librarian insists that they never sent out that letter. However, she does have a copy of the book, so Batman decides to investigate it. Oh, and she wants to take a photo-op and get a picture of Batman in her library. Unfortunately Batman knows that something is fishy about this whole situation, so he uses a yard stick to open the book. Which was a good call, because it turns out the book was rigged to explode. The book was destroyed by the explosion, but Batman was convinced that he saw something in the explosion. Luckily though, the library took the photo at the exact right moment, and has evidence of what was in the fire. 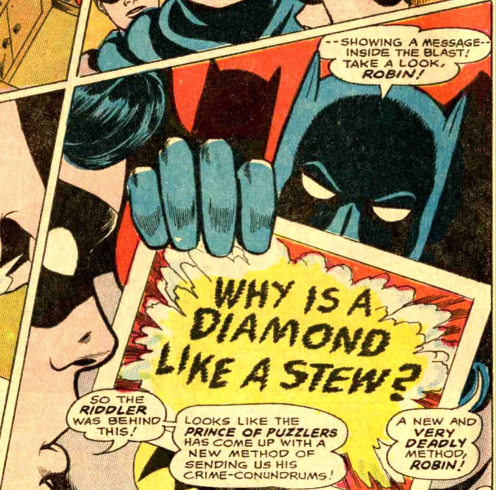 Yep, the Riddler somehow left a riddle in the middle of an explosion. Because that man is a goddamn professional. Batman and Robin then leave the library, ready to solve the riddles and catch the Riddler. We get a brief reminder about Riddler’s obsessions, and then Batman lays out that answer for us. The answer is carrots. However, as soon as Robin suggest that this is a diamond thing, but Batman decides to put him in his place by mentioning that gold can be valued with karats as well. Oh, and the author of that book from earlier was named Morland, which is also the name of a gold coin collector in town. So Batman and Robin race off into the night to stop the Riddler.

Meanwhile, the Riddler and his goons are robbing the coin collector, and Riddler is bragging about his ingenuity. He’s aware of his weird psychological problem that forces him to give riddles before crimes, and he’s figured that this incredibly cumbersome method of riddle delivery will make things all better. However, Batman and Robin then come storming in, ruining that hypothesis. Batman and Robin beat up the Riddler and his goons, even defeating the lightning gun that Riddler has for some reason by using the coins as lightning rods. And once that’s over they arrest Riddler and bring him to prison, all while Riddler complains. But while this is going on Riddler seems rather unworried about the whole thing, and even tells Batman that he’ll never figure out what he’s actually planning, unless he goes to prison. This seems like a random statement, but Batman takes it to heart when Riddler leaves the prison on bail almost immediately. So Batman heads into the cell, much to Robin’s confusion.But then this happens, immediately.

Yeah, Batman apparently noticed that the Riddler’s costume was missing one of it’s dots, and thus surmises that that dot is a crucial clue.  So he starts digging around in the cell, and eventually find some shavings that he assumes are the dot, and realizes that that dot was made of invisible ink. He also assumes that the Riddler put the message on the mirror, so Batman uses a match on the mirror to ignite the message. Which promptly releases some sort of knockout gas, making Batman pass out. But it also reveals a new clue, which Robin records while he waits for Batman to wake up. It says “why is a room filled only with married people like an empty one?” Which they eventually bullshit into meaning that Riddler is robbing the “Bachelor Diamond” from Gotham City’s Museum of India. So the Dynamic Duo race over the museum, just in time to see Riddler stealing the diamond.

They fight Riddler and his goons a bit, but in the process get trapped in a weird little alcove, where a chain-link fence drops down. This normally wouldn’t be an issue, but during the fight Riddler somehow managed to pour glue all over their utility belts, trapping their tools. However, Riddler informs the that simply striking the fence will cause it to explode (what?) and they could be free. But he’s also setting up a new riddle outside the fence, using letter-blocks that are pointed away from them, so if they blow it up it’ll ruin whatever the riddle was. But that’s not going to stop Batman and Robin, who start flicking priceless jewels at the blocks, one at a time, so that they can gather what the message was. Sure. And once that’s done they break the fence, learn that the riddle was “why must a dishonest man stay indoors?” This obviously means “so no one can find him out,” which they decide points them in the direction of Riddler’s hideout at 1 Canever St, just outside of Gotham. So they race over, get the drop on the Riddler, beat him up, and send him to prison where he can think of new ridiculous riddles. 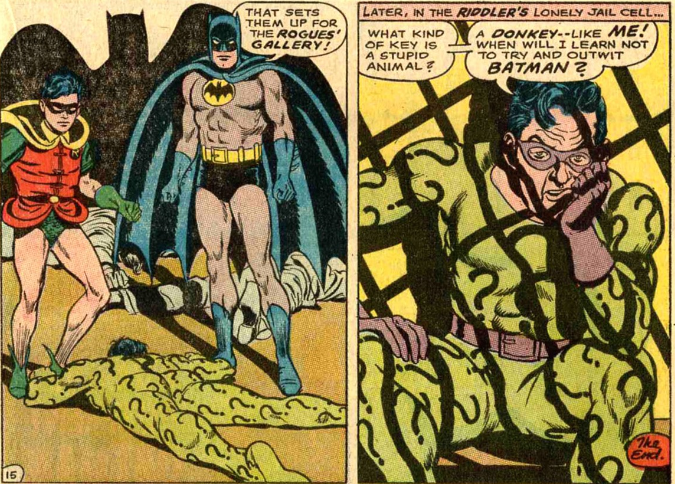 Okay, so this was not the strongest Riddler story I’ve done. It kind of falls into the trap that the Batman 66 tv show did, where the riddles are completely incomprehensible, require in depth knowledge of Gotham city that they just made up, and are purposefully impossible to solve. And while I enjoy that in the show, because it’s all a joke, I don’t really like it in the comic. I prefer a Riddler story where it’s possible to know what the hell is going on. And we sure don’t get that here. Which I kind of understand. I’m sure writing a Riddler story and actually crafting believable and decent riddles is an almost impossible task. But this one just felt kind of lazy. I still got some fun Riddler action, and Batman and Robin actually doing some detective work to figure things out, but the rest was just kind of weird. And man was that cover misleading. I mean, most of them are, but jeez. This implied that the Riddler was somehow putting Batman in jail, but it just ended up being that Batman went into a jail cell at one point, to find a clue. It’s almost like whoever designed the cover just flipped through the pages, saw that it included the Riddler and a moment where Batman was in a jail cell, and put it together. Like I said, not one of the better issues I’ve read, but still enough Batmany goodness to make it fun.

“The Riddler’s Prison-Puzzle Problem!” was written by Gardner Fox, penciled by Frank Springer, and inked by Sid Greene, 1968. 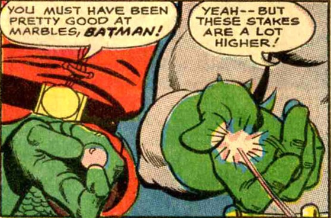