Hello everyone, and welcome back to another week of Lifetime of Simpsons. And folks, we have a weird week ahead of us. We have one legitimately great episode, one ridiculously bad one, and then just a bunch of nothing. Exhibit A, today’s episode. Some nothing.

This episode is jam-packed with plot, so things start right off the bat with Lisa being frustrated at a school assignment she’s working on that’s supposed to examine her family’s heritage. This is proving difficult because the Simpsons are apparently super boring, and have nothing interesting in their DNA. So Lisa is just sitting in the kitchen, trying to desperately find something engaging from her family tree, when Bart walks in and shows her that weird trick you can do with the Land O’ Lakes butter boxes where it looks like the mascot is flashing you. Which I’m kind of shocked that was something on an episode of the Simpsons.

But that wasn’t just completely random, because that little bit of hormone-fueled shenanigans inspires Lisa to do something horrible. She’s going to pretend that the Simpsons have American Indian blood in them, and were once members of a forgotten tribe called the Hitachi’s. So, logically, Lisa makes herself a dress out of the corncob curtain from the kitchen and heads into school to give her completely made-up speech about being an American Indian. But apparently everyone in Springfield Elementary is stupid, because they just accept her story at face-value, and Skinner even announces that she won some contest and is going to have to give that speech to a bigger crowd soon.

Meanwhile, there’s trouble brewing out on the outskirts of town when Cleetus stops milking his cow and sets off a ridiculous chain of events that ends with him dropping his pipe on some hay and beginning a massive fire. The fire starts quickly spreading through town, and seems to be heading straight to the “flammable district.” And while all of this is going on Bart and Milhouse have stolen all of the school’s fire extinguishers, and have strapped them to a wagon to make a rocket.

Bart fires the extinguishers, and ends up racing through town, accidentally putting out all of the fires, and saving the town. I had never seen this episode, so at this point I assumed that this was just some weird little gag before going back to the main plot of Lisa pretending to be an American Indian, but oddly enough, that was not the case. Instead, Bart is considered a hero, gets a commendation from Mayor Quimby, and is even able to ask for one favor, which Bart narrows down to getting a license to drive.

And, just like that, we have a new A-Plot. That’s right, Lisa’s story just got down-graded to B-Plot. Okay. Let’s go with this. Because now this ten-year old boy has a valid license to drive, so Homer gets the joy of teaching Bart how to drive, and have road rage. And, surprisingly, Bart really picks up driving quickly, and instantly becomes obsessed with driving, to the point that we get a redo of the opening credits, but with Bart driving around instead of using his skateboard.

We temporarily take a break from Bart’s driving plot to check back in on Lisa, and things have escalated horribly. Lisa is having to give her speech in front of Springfield’s Multicultural Center, to a huge crowd of people. And they love it. Which means Lisa is getting more and more terrified to getting caught in this lie, which isn’t helped when an American Indian journalist comes to ask some questions about her tribe. Which obviously means she has to double down and make up a lot more lies just to keep afloat.

But that’s enough about that for a while; let’s get back to Bart’s driving plot, because things are getting weird there too. Bart is now doing most of the driving for the family, and Homer has even given Bart a cellphone so that he can call him whenever he needs Bart to drive somewhere. This then leads to Bart having to drive Homer’s drunk ass all over town, and things quickly start to wear down on him. Things even get so bad that Bart decides he needs a little vacation. So Bart peaces out and drives out of Springfield, and to North Haverbrook.

And you know what? North Haverbrook rules. It seems to be a little college town that has such things as the World’s Largest Bounce Castle and an Ultimate Fighting Animal Zoo. And while Bart is driving around the town he sees a group of teenage girls, and decides to invite one of them, Darcy, along to ride around with him. She accepts, and doesn’t seem to care that Bart is clearly five years younger than her. 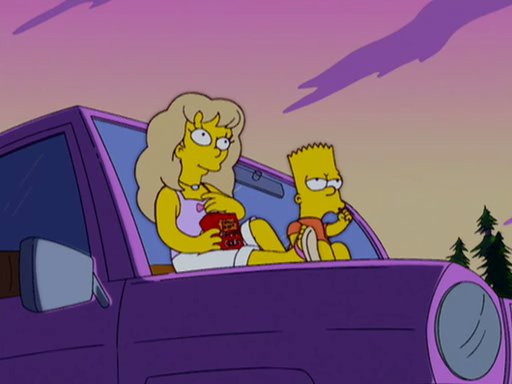 Bart actually has a really great time with Darcy, and they end up starting a little relationship. Bart begins driving out to North Haverbrook constantly so he can go on dates with Darcy, and make out a little in his dad’s care. However, this good time is ground to screeching halt when Darcy announces that because they made out, they have to get married. And because Bart is an idiot, he decides that this is true, and they head straight to a court-house to get married.

Luckily though, Bart finally realizes that this whole thing is insane, so he decides to admit to Darcy that he’s only ten years old, and thus can’t get married. Which is when Darcy drops a bombshell. She’s pregnant and wanted to marry some dumb kid so that she wouldn’t be alone, and Bart happened to be that dumb kid. And, shockingly, this makes an impression on Bart, and he starts to feel so bad for Darcy that he decides they should actually get married. But where can a ten year old get married? Utah!

Oh, hey, that Lisa plot is still not finished. Let’s wrap that up. Things have continued to escalate for Lisa, to the point that she’s been invited to give a lecture on the Hitachi people to some massive American Indian conference. And after a while of vamping and making up bullshit, Lisa finally comes clean and admits that she made it all up. Which causes a whole bunch of people in the room to also admit that they aren’t actually American Indians, and have all been lying too. Plot over, I guess?

Anyway, Bart and Darcy are driving to Utah, and Bart left behind a note to Homer and Marge explaining everything. And they freak the hell out. So do Darcy’s parents, who show up. So Homer and Marge track Bart down by looking at Homer’s credit card purchases, and end up racing to Utah where they get to the chapel just on time to stop the wedding. They don’t let them get married, and they even announce that Darcy’s mom is pregnant, so they’ll just pretend that Darcy’s baby is a twin. So…that’s fixed. I guess Bart can’t drive anymore? Eh, episode over. 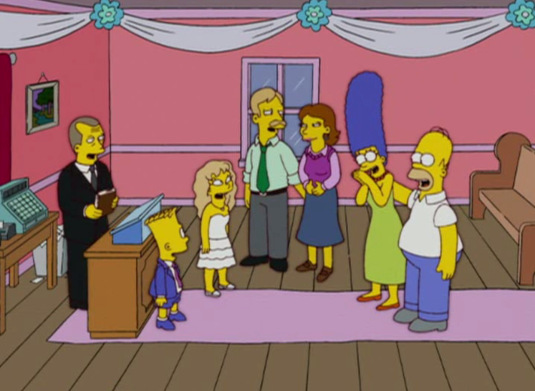 This is such a weird episode. And I think one of the big things that make it seem weird is that they just completely drop the Lisa plot, and relegate it to a B-Plot. Honestly, both of these plots could sustain their own episodes, but they just feel weird and rushed in this format. The Lisa plot is really weird, and in a world that dealt with that one woman who pretended to be black to get a job as a professor, this plot could have been really special. But it’s that Bart plot that really feels weird to me. Bart is ten years old, and starts making out with some pregnant 15 year old and wants to get married? What the hell? That’s such a weird premise, and I don’t think the episode did enough work to make it seem plausible. It was just super out of character. Bart usually has no interest in girls, and in this episode he’s cruising around looking for dates. I don’t know, it just feels like a bit of a sloppy story, but that could just be me.

Take Away: Don’t marry a person you met a week ago. And don’t lie and pretend to be a part of an ethnicity you aren’t.