Yesterday I was kind of making fun of the fact that it seems weird Nelson has had three episodes devoted to him. But honestly it doesn’t seem that ridiculous, Nelson is a pretty decent character who has some surprising depths. However, that doesn’t always seem to be a prerequisite. Case in point, this episode. Want to learn about Gil? No? Too bad.

The episode starts off oddly enough with a new opening, with a Christmas flavor to it. It’s basically the exact same opening that we’re used to, with the family heading home, but it’s done with new animation and some Christmas stuff tossed in. I know that they changed the opening after the movie, which is coming up soon, so I feel like this was just the show dipping their toes in the water for the opening change.

But after that the episode actually starts with the family going to some sort of Krusty on Ice Christmas special along with the rest of the town. It’s super strange, and is basically a hodgepodge of Krusty and Christianity, which doesn’t really gel that well. But that doesn’t really matter, because the scene really only exists as a gag machine, such as Moe calling Elvis Stojko gay, seeing Sideshow Mel be incredibly depressed, and seeing two body doubles skate while pretending to be Krusty and Mel.

The show falls apart though when some little skit involving a Grumple, a Grinch ripoff, and things are ruined when a basketball game shows up and they start getting rid of the ice in the rink. This of course leads to a massive brawl between the pageant participants and the basketball players, which of course involves Homer trying to kill the Grumple, setting off a chain of revenge and misery that will follow throughout the entire episode.

After the terrible pageant though we see that the family are heading out to Costington’s, on Christmas Eve, to shop for presents. Which seems like a terrible plan. Oddly enough we don’t get many sight gags in the department store, and we basically just cut straight to Lisa visiting the mall-Santa, who is being played by poor old Gil. Lisa has a nice time with Gil, and she ends up telling him about the special toy that she wants for Christmas, which is unfortunately sold out. 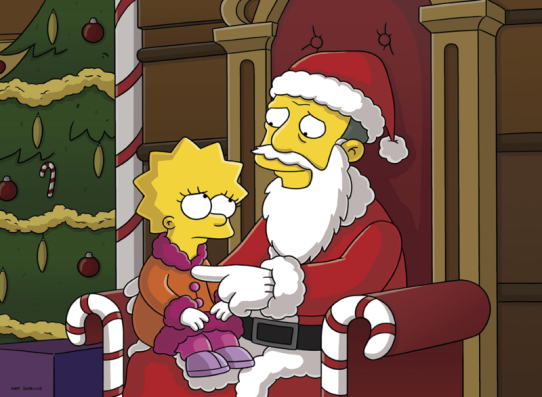 Gil decides to do Lisa a solid though, and tells her that he saw one of the toys back in the storeroom, and he heads back to get it. Marge then buys the toy for Lisa, and thanks Gil for being so sweet. Which is right when Mr. Costington shows up and announces that that toy was for his daughter, and he commands Gil to take it back from Lisa. Gil refuses though, not wanting to ruin a little girl’s Christmas, and he’s promptly fired. Marge feels terrible about getting Gil fired though, and she invites him to come over for dinner that night.

So Gil comes to spend Christmas Eve with the Simpsons, and actually seems to have a great time. He has dinner with the family and ends up playing Christmas carols with them long into the night. It gets so late that Marge tells Gil that he shouldn’t leave, and she just tells him to stay over that night. Which was a terrible plan. Because the next morning when they all wake up they run down to open presents and find that Gil has decided that that invitation was permanent, and he has now moved into their living room like a little shanty town. We also see the Grumple outside their window threatening to kill Homer.

Homer is immediately pissed about Gil deciding to live in their house, and he tells Marge to kick him out, since she was the one to invite him in the first place. Marge feels bad about kicking him out on Christmas though, and says she’ll do it the next day. This proves difficult though when Gil starts proving to be a complete sadsack, especially when he mentions that he’s homeless. This really gets to Marge, and she agrees that he can stay for a couple days until he gets back on his feet.

Cut straight to New Years Day, and Gil is still just sitting on their couch, being a bum. Marge is clearly sick of him, but he keeps promising that he’s just a day or two away from getting a big job in Scottsdale, and will be out of their hair, so she keeps allowing him to stay. Which is really starting to piss off Homer, who tells Marge that she has a problem with letting people walk all over herself. Homer realizes that he should probably just get rid of Gil himself, but he promises he won’t so that Marge learns to assert herself. He also gets in a barfight with that Grumple thing from earlier.

This is a terrible plan, because we now get a fun montage of Gil continuing to be at their house for an absurd amount of time. We see him barge in on Homer and Marge trying to have sex on Valentine’s Day. We see him and a group of sad drunks (Kirk, Cat Lady, a leprechaun, and a random bum) drinking and singing songs on St. Patrick’s Day. And we finish things off by showing the day after Thanksgiving, when things finally go too far.

The thing that pushes Marge over the line is when Ned comes to show her a Christmas card that Gil has sent to the town, with him pasted over the Simpsons. This for some reason is the last straw for Marge, who freaks out and storms into the house to kick Gil out. Unfortunately when she gets inside the house she finds that Gil is gone. The kids even tell her that he’s moved out, having finally gotten the job in Scottsdale. So why did he make a Christmas card? No clue.

This probably should make Marge happy, but it really doesn’t. She’s glad that Gil is gone, but she really wanted to be the one to kick him out. So Marge does the only thing that makes sense, and gets the family to pack up and head to Scottsdale to tell Gil off. The family drive straight to Scottsdale, and are shocked to find that Gil is actually a huge deal here. He’s on billboards and bus stops all over town as the big realtor, and he has a big job at the local realtor company.

Marge and the family then storm up to Gil’s office, where he’s giving a pep talk to all of his adoring employees, and Marge decides to give him a piece of her mind. She rips into Gil, telling him what a bum he is, and that he’ll never take advantage of her again. This turns out to be a bad call though, because all of Gil’s employees instantly lose respect for him, and he’s fired. So the guilt is back, the Simpsons decide to throw Gil a bone and apparently buy a house in Scottsdale, and they all go there to sing Christmas carols. Then the Grumple shows up with his family, and they all have a lovely time together.

There are some characters that I just don’t think can sustain whole episodes devoted to them. They’re characters that work better as jokes, and not so much as characters. Comic Book Guy is a character that I feel that way about, because I feel like any time they make an episode about him it just feels weird. And Gil is certainly one of those characters. Gil is like Moleman, his purpose in this show is to be sad and pathetic, and to have bad things happen to him. He’s a human punchline. And it really feels weird to focus so much on him. He’s just not that interesting, and this episode is just so completely dull and forgettable. I guess the idea of Marge learning to assert herself and not being a doormat is a pretty interesting concept, but they just didn’t do much with it here. Honestly, I’m kind of surprised that the point of this episode wasn’t Lisa trying to fight for Gil while the rest of the family hated him, since he did a good thing for her in the beginning. Kind of like the episode when Otto came to live with the family and Bart was the only one defending him. But whatever, I guess we just needed a reminder that this show is running out of steam.

Take Away: Don’t let people walk all over you, and learn to assert yourself. Also, don’t let strangers live with you.

“Kill Gil, Volumes I & II” was written by Jeff Westbrook and directed by Bob Anderson, 2006.