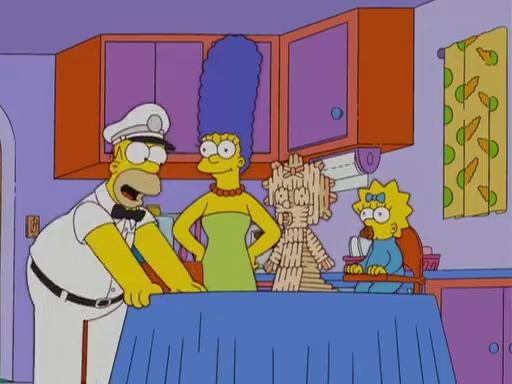 Howdy everyone and welcome back to yet another week of Lifetime of Simpsons. And we have a doozy of a week for you this time. We’re in the weeds folks, and while last Season 18 has been off to a really weird start where it seemed to be alternating between interesting episodes and garbage, we’re a little closer to all garbage this week. Sounds fun!

The episode starts off with Bart and Lisa sitting around the breakfast table, while Bart is wasting food and just picking out all of the marshmallow’s from his cereal and throwing away the cereal part. Marge gives him a little lecture about how he shouldn’t waste food, because it’s disrespecting Homer who works hard to provide them with food. Which is when we cut straight to the Nuclear Plant where Homer and the guys are playing some sort of insane chair hockey game.

Homer’s having a hell of a time, winning the game for his team, when Mr. Burns comes in. And he is not pleased. He starts yelling at Homer, telling him that he’s on thin ice. Unfortunately, as Burns is lecturing Homer an ice cream truck shows up, and Homer decides to stop caring about Burns and chase after the truck. So Burns fires Homer, and starts coaching the chair hockey team, trying to get them to be a better team.

Homer runs out of the Plant, not caring that he no longer has a job, and chases down the ice cream truck. The guy who runs the truck is thrilled to see Homer, and the two chat for a bit before Homer pays in a hundred dollar bill, and asks for change. So the little old man spends the rest of the day counting out quarters, until he has a heart attack and dies. Which obviously leads to a ridiculous funeral full of ice cream workers and Homer.

Homer talks with the truck driver’s widow, and he learns that she’s going to have to get rid of the truck and lose the business. So Homer decides to spend his severance pay on buying the truck from the lady, and becoming an ice cream salesman. Homer then hires Otto to completely pimp out his ice cream truck, so that it looks like the coolest ice cream truck ever, and he has a crazy scene where he gets dressed like he’s Ali G. 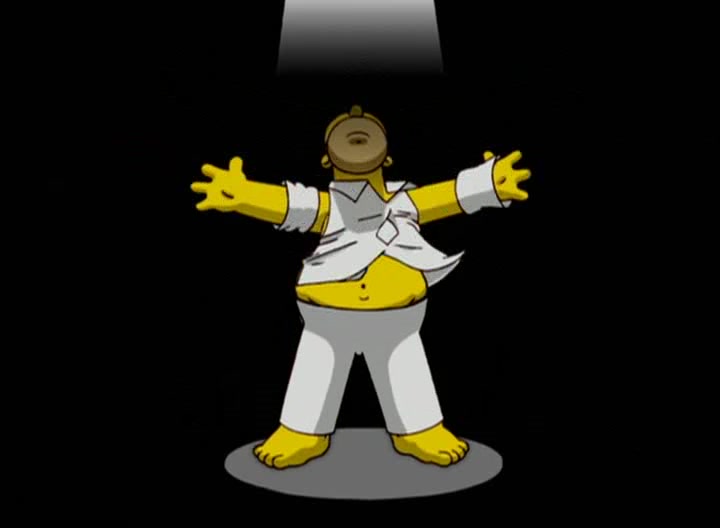 Meanwhile, Marge is doing laundry and watching some daytime talkshow called Opal, that’s all about how stay-at-home moms are losers and are wasting their lives. Marge takes this very personally, and decides that she needs some new passion to make her life worthwhile. And that isn’t helped by the fact that Homer is so psyched about his job, and seems to genuinely love it. However, it’s Homer’s job that helps her find her passion, because one day he comes in with a whole bag of used popsicle sticks, and Marge has a flash of inspiration.

Marge takes the pile of sticky wood and ends up making a pretty impressive statue of Maggie out of the sticks, using her latent artistic abilities. And, shockingly, Homer loves the little statue, and fully encourages Marge to keep up with this new passion, and continue creating popsicle stick statues. So Marge just start cranking out statues, starting off with Bart and Lisa and eventually expanding until their backyard is basically full of statues of various townspeople.

Which is when providence shines on Marge, because right at that moment Kent Brockman is flying overhead in a helicopter while covering a high-speed car chase, when he spots Marge and smells a human interest story. So Kent lands in the backyard and gives Marge a chance to talk to Springfield about her passion, and get the word out about her abilities. And that broadcast ends up convincing the Rich Texan to show up at their house and offer to bankroll a weird gallery exhibit for Marge’s sculptures.

Oddly enough though the gallery show is just going to be in her front yard, which seems weird but whatever. Although Marge still thinks that this is a huge deal, and asks Homer to be there for her as emotional support. He still has to go drive around and sell ice cream though, and promises that he’ll be back in time for her exhibit. However, the gods of fate are not on Homer’s side, because he almost immediately finds some sort of jamboree for divorced dads, and makes a jackpot selling ice cream to the dads so they can buy their kids love.

Unfortunately this exchange takes a whole lot of time, and Homer realizes that he’s going to be late to Marge’s exhibit. So Homer puts the pedal to the metal, and starts driving home as fast as he can, quickly running into traffic. Left with no alternative, Homer decides to do something crazy and starts off-roading in his pimped out ice cream truck, trying to get home on time. Which he does. But he also careens into the exhibit, destroying them all. Whoops.

Marge is obviously pissed about this whole thing, and she starts yelling at Homer, telling him that he only cares about his own happiness and not hers. She ends up getting so pissed off that she barricades herself in the bedroom, not letting Homer come in and not talking to him. Which causes Homer to just stand outside the bedroom, whining and crying, trying to make her forgive him and go back to normal. Which doesn’t really work that well.

Until one day when Homer wakes up from sleeping outside the door, and finds it open, but Marge not inside. He runs downstairs to find her, and the kids explain that she left the house, and have no further information. Homer then heads out in to the town, trying to find Marge, and ends up coming across her standing atop City Hall while a crowd gathers. Homer assumes that Mage is getting ready to commit suicide, but it turns out that she’s actually just created her masterpiece, a gigantic statue of Homer. She explains that she still loves Homer, and that her greatest creation is the life that they’ve sculpted together, which is a pretty sweet sentiment. 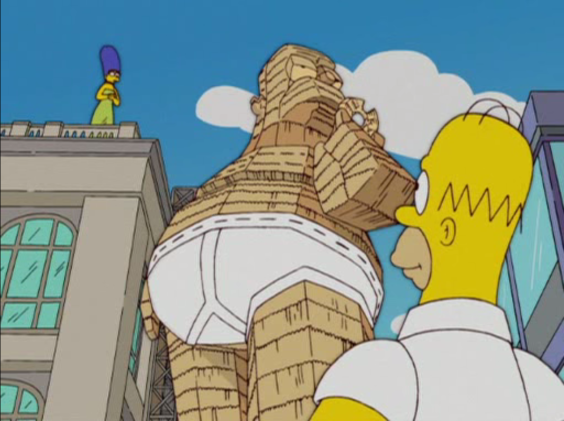 I’m really mixed on this episode. There are some great aspects to this episode, but also a lot of stuff that I’m just getting sick of. Listen, I’ve talked about this a whole lot lately, but I just can’t handle episode about Homer and Marge’s marriage being suddenly put on the rocks anymore. Which honestly isn’t being helped by the stupid way I’m watching these episodes, putting them all together like this. But whatever, it’s still something I don’t like. Just like the fact that I’m getting really tired to Homer constantly getting fired from the Plant and getting some new random job. I know that that’s a trope of Simpson’s episodes, but it’s getting really tiresome at this point. But despite all of that, there’s still some interesting things about this episode. I’m always a fan of Marge expressing herself creatively, even though this popsicle stick sculpture thing is a little weird. And despite my feelings about Homer and Marge’s marriage always getting magically fixed at the end, that last little note was pretty decent. I don’t know, just kind of an odd episode that I’m still not sure how I feel about. Which is going to be a theme this week.

Take Away: Don’t let people tell you that the way you’re living your life is something you should be ashamed of. Do what makes you happy.

“Ice Cream of Margie (with the Light Blue Hair)” was written by Carolyn Omine and directed by Matthew Nastuk, 2006.

Tagged as: 2006, Ice Cream of Margie (with the Light Blue Hair), Lifetime of Simpsons, Season 18, the Simpsons