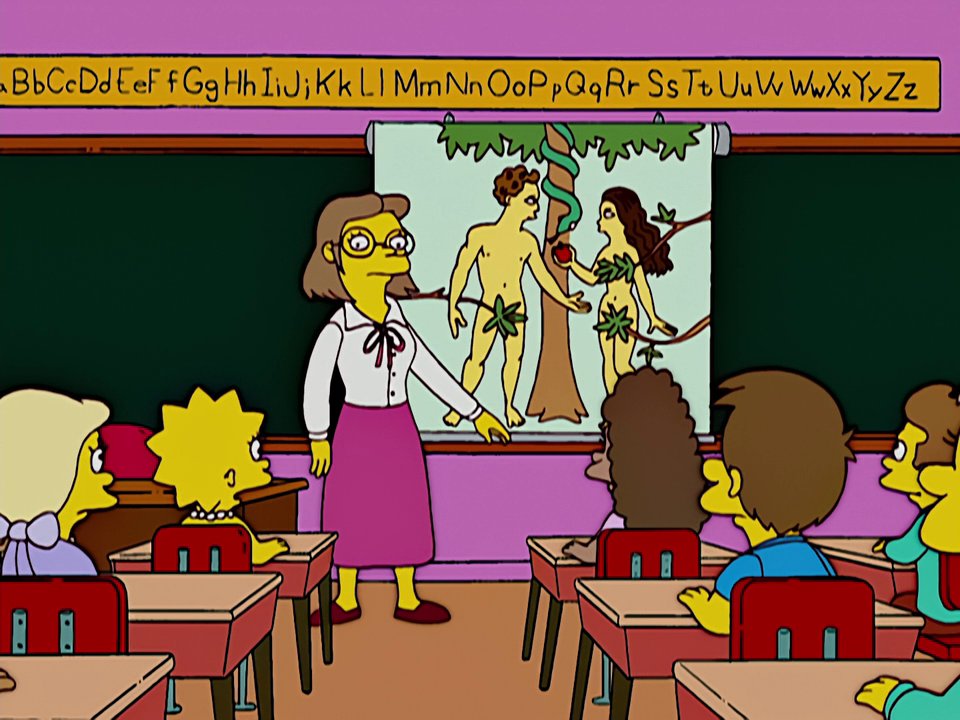 This hasn’t been that bad of a week her on Lifetime of Simpsons. That’s going to change soon, but before it does why don’t we just enjoy the fact that we managed to get another pretty solid episode today? Just take it one day at a time, that’s all we can do.

The episode starts off with Bart just sitting around on the couch, being bored, when he gets a friendly reminder from Boobarella on TV that summer is about to end. And this horrifies Bart, who realizes that he’s wasted his entire summer. Which obviously means that he’s going to whip out a summertime bucket list and accomplish as many tasks as he possibly can as fast as he can. Which obviously means we’re about to get a montage.

We see Bart win a baseball game with the Bad News Bears while hitting a home run, he runs onto a staged production of Grease 2 put on by a community theater, he watches some summer blockbuster movie that’s basically Men in Black, and kisses some random girl to have a summer romance. However none of this matters, because when Bart gets home and announces he’s finished his summer tasks, Lisa actually gets the plot moving by saying that they have to go to the museum for her summer task.

So the family pack up and head out to the museum, which is supposed to have a big exhibit on loom weaving. However, right as they get there they find that the exhibits are changing, and it’s not all about weapons. Which makes Homer and Bart happy. But what doesn’t make them happy is the massive line of people waiting to get into the exhibit. Luckily, Ned and the boys are right up front, so Homer decides to cut in line, knowing Ned won’t say anything. Which inspires everyone in line to cut Ned, sticking him and the boys right to the back.

The Simpsons don’t care about that though, and they head on into the exhibit to get some gags. They check out an IMAX documentary about how cool but useless nunchucks are, play with a wall of weapons, stick Milhouse on a rack, and try out bulletproof vests. All in all, it was a fun day. And when they leave they see that Ned and the boys are still in line, not having gotten in. Which is a bummer, because the exhibit is now closed, so Ned and the boys have to wander the rest of the museum to occupy themselves.

Which was a bad call, because the very first thing that Ned finds is a whole wing of the museum devoted to evolution. And, like an embarrassing amount of people in America, this infuriates Ned. He gets so pissed off that they’d be teaching evolution and not creationism that he decides he has to do something. So Ned storms right over to the Church to complain to Reverend Lovejoy. However, Lovejoy doesn’t really care about this matter. Until he realizes that the controversy stirred up by an evolution panic could get more people coming to the church, and then he’s all on board.

So Ned and Lovejoy head to Springfield Elementary and get a meeting with Principal Skinner where they blackmail him into including creationism in the curriculum. And guess who has a problem with this? That’s right, Lisa! Ms Hoover starts teaching the kids creationism by showing them a video called “So You’re Calling a Liar” which is completely unbiased and fair. And Lisa is so horrified that she decides to stand up and try to teach her classmates about real evolution. Unfortunately the rest of her class are idiots, and ignore her.

Lisa is absolutely furious about this turn of events, and vents to Marge. Marge however is really weirded out by this argument, and is uncomfortable taking sides between science and religion. So Lisa decides to do something drastic, and goes to a Town Hall meeting to get the town to reject creationism, telling them that it’s ridiculous that the school has to teach both evolution and creationism. And in true Springfield fashion, that shit backfires like crazy.

Because now Springfield has decided that it’s illegal to teach evolution, and it all has to be creationism. And, just like that, Lisa is a rebel. She decides that she doesn’t want to succumb to ignorance, and sets up an underground science club with all of the smart kids where she intends to actually learn evolution. Which is brought to a screeching halt when Chief Wiggum bursts in on one of the meetings, and arrests Lisa to teaching the forbidden science.

You know what that means! Trial time! Lisa is being defended by an ACLU lawyer that everyone hates, and the prosecution gets some humble country lawyer who is manipulating the jury. And things start going terribly, quickly. They put Professor Frink up to explain evolution, and he just ends up insulting everyone who believes in religion. Then they let some ridiculous “Christian Scientist” up on the stand who says that all science is fake. So Lisa is starting to get pretty despondent, having given up hope on Springfield.

And Lisa being so depressed is enough for Marge to decide to fix things. And the path that she takes to do that requires that she read all of Origin of the Species to learn about evolution. When Marge finishes the book she completely understands and accepts evolution, and has come up with a plan. The next day at the trial they put Ned up on the stand, and have him say on the record that man has nothing to do with apes. Which is when Marge springs into action. She hands Homer a bottle of beer, but no bottle opener, and he quickly devolves into an ape, trying to smash the bottle open. This becomes so distracting that Ned ends up getting mad and calling Homer a ‘stupid gorilla.’ Which apparently means evolution is real? Eh, whatever, it gets Ned to admit he’s wrong, Lisa wins, and everything is back to normal. 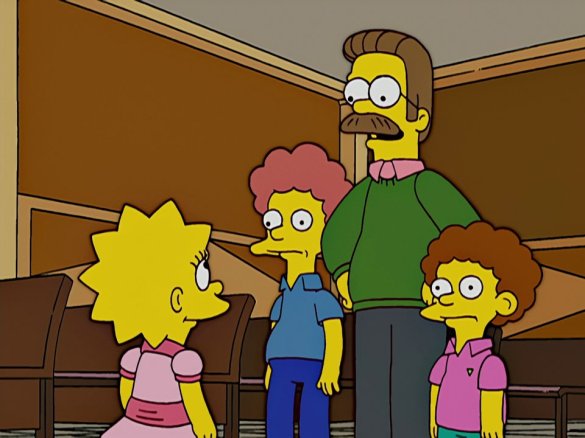 I was really into this episode for almost the entire time. I love the idea of Springfield having some sort of Scopes Monkey Trial, and the idea of pitting Lisa and Ned against each other is perfect. Of course Lisa would be appalled at Springfield Elementary teaching creationism, and of course she would create an underground of truth. That’s great. And I think that they actually made Ned a tad sympathetic in this one. He doesn’t hate science; he’s just scared of anything that’s not religion. I normally cannot stand anyone who believes in creationism and thinks that it should be taught to people, but Ned does seem fairly rational in this episode, especially by the end when he accepts that the church doesn’t belong in school. What doesn’t work for me in this episode is the ending. Having Ned admit that Homer acts like an ape proves that evolution is true? I think just facts should be able to do that. But Springfield doesn’t really do well with facts, so they had to come up with a ridiculous stunt to get it understood. I don’t know, I feel like this was a well-structured episode, but then kind of slapped together an ending that didn’t really make a whole lot of sense. But besides that I actually really enjoyed this episode. And that good will is not going to help tomorrow.

Take Away: Evolution is real, creationism is ridiculous, and the church doesn’t belong in education.

“The Monkey Suit” was written by J Stewart Burns and directed by Raymond S Persi, 2006.

Tagged as: 2006, Evolution, Lifetime of Simpsons, Season 17, The Monkey Suit, the Simpsons