Hey, remember how there was an episode where the Simpsons had to participate in a reality show, and it was really boring and mostly relied on hackneyed jokes about how dumb reality shows are? Well apparently the creators of the Simpsons didn’t remember that, because we have it again.

After a really odd couch-gag that’s basically just a recreation of the opening scene done in live-action, which I believe was done by a British town to win a contest or something, we see that Homer and Marge are off to Lenny’s apartment for some party. Lenny has apparently said that there’s a special surprise announcement, which has brought a whole slew of people to his apartment to mingle and have a great time.

That is until Lenny gives the surprise announcement, which was apparently just to let them know that he’s bought a new plasma flat-screen TV, which is a big deal I guess. Well, it is to Homer at least. He thinks that this is amazing, and tells Lenny that he plans to spend the rest of his life there, watching TV. And this doesn’t seem to be a joke, because Homer immediately jumps onto Lenny’s couch, and proudly parks himself there for the foreseeable future.

Literally. Three days go by and Homer still on Lenny’s couch, watching shark documentaries. Things even get so dire that Marge send Bart and Lisa to try and bring him home, but they too just end up getting seduced by the glow of the TV. So that was a failure. But after all of the scheming to get Homer off the couch the thing that finally works is Lenny just flipping out and kicking Homer out of his apartment, which probably shouldn’t have been Plan C.

However, as soon as Homer gets back home, he immediately starts acting like a petty child about their TV and how it doesn’t compare to Lenny’s. And to curb this annoying complaining, Marge has decided to enter herself into a competition where the winner gets a plasma TV. So everything will end up alright, right? Well, not yet, because Marge doesn’t win that contest, instead she gets an all expense-paid trip to Hollywood to check out the Fox studios.

The Simpsons then head to Hollywood, and get a special tour through Fox Studios, which is mainly just slams against Fox. Although we do get to see Homer get in an argument with Dan Castellaneta, so that’s neat. Things actually begin to start happening however when the family wander past the part of the studio that specializes in making reality shows. And while there Homer starts up a conversation with a producer who’s making some sort of wife-swap episode. And when Homer learns that the prize is roughly the amount to buy a new TV, he’s sold.

So Homer signs himself and Marge up for this wife-swap show, and then has the wonderful task to informing Marge about the deal. She’s obviously less than thrilled about it, but get pressured into going through with it thanks to the presence of the film crew. Things then move extremely quickly, and the Simpsons are introduced to the family that they’ll be working with. It’s a family with a shlubby husband named Charlie played by Ricky Gervais, and his horrible wife Verity, some cold professor from Yale.

The two families are then split up, and Marge goes back to Charlie’s house and Homer settles in with Verity. Who is extremely unpleasant. She even explains that she hates Charlie, and did this whole show just to humiliate him. At least Homer did it because he’s dumb and greedy. Marge however is having a better time, getting to know Charlie the pathetic sad-sack. He’s basically just playing his role from the Office, but more brow-beaten, and Marge seems like the only person who is nice to him.

We then just start cutting between Homer and Marge, seeing how their experiences are stacking up. Verity continues to prove a total jerk, even making Bart write up some sort of book-report after watching Itchy and Scratchy. But things aren’t going well for Marge either, because Charlie is starting to act pretty odd. He’s becoming obsessive towards Marge, and starts telling her weird jokes about beating his wife to death. All leading to him admitting to one of the cameramen that he’s smitten with Marge.

And that attraction leads to the insane finale of the episode. Because it turns out that the confidence Marge gave Charlie throughout the episode has convinced him that he needs to profess his love and win Marge. So he puts on a kimono, lights a bunch of candles, and serenades Marge with a song he wrote, all while the camera crew is around, being incredibly creeped out. And he finishes things off by telling Marge that he loves her, basically just because she extended him common courtesy.

Marge is less than thrilled with this revelation however, and quickly dashes any hopes that Charlie had. She explains that she’s going to stay with Homer, and tries to teach him how to be a better husband. And right on time Lisa shows up to pick Marge up, because the show is over. So Charlie comes with Marge and Lisa, hoping to give Verity a piece of his mind. Unfortunately when they get there they find that the point is moot, because Verity has come out of the closet and is going to divorce Charlie and date Patty. Because I guess Patty’s sexuality is just a punchline now. But whatever, the episode is over, the family is back together, and Homer buys a stupid TV. 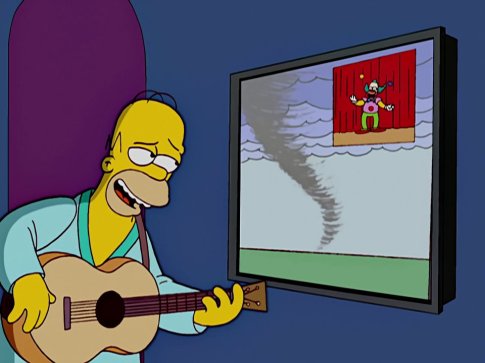 This is an odd episode. And not just because of the fact that this episode was actually written by Ricky Gervais. Because that’s pretty weird in and of itself. They didn’t just let Gervais take the episode over with his mumble-mouthed shtick, they let him write the damned episode. And it’s just kind of weak. The idea of Homer and Marge being put on some sort of wife-swap show isn’t particularly rife with potential, but the way they went about it was particularly lackluster. I mean, they didn’t even give Verity any character other than being a huge pain in the ass, and basically just evil. And Charlie was just a doofus who ended up being one of those creepy dudes who assume that just because a woman isn’t mean to him, they’re obviously in love with him and he deserves them like a trophy. Which isn’t to say that that archetype couldn’t be used to say something, it’s just that this episode doesn’t. Charlie doesn’t really learn anything, and then gets further dumped on by the fact that his wife is leaving him for Patty, and then we never see him again. It’s just not an interesting episode.

Take Away: Don’t go on reality shows, especially when you haven’t run it by your spouse.

“Homer Simpson, This Is Your Wife” was written by Ricky Gervais and directed by Matthew Nastuk, 2006.

Tagged as: 2006, Homer Simpson This Is Your Wife, Lifetime of Simpsons, Season 17, the Simpsons