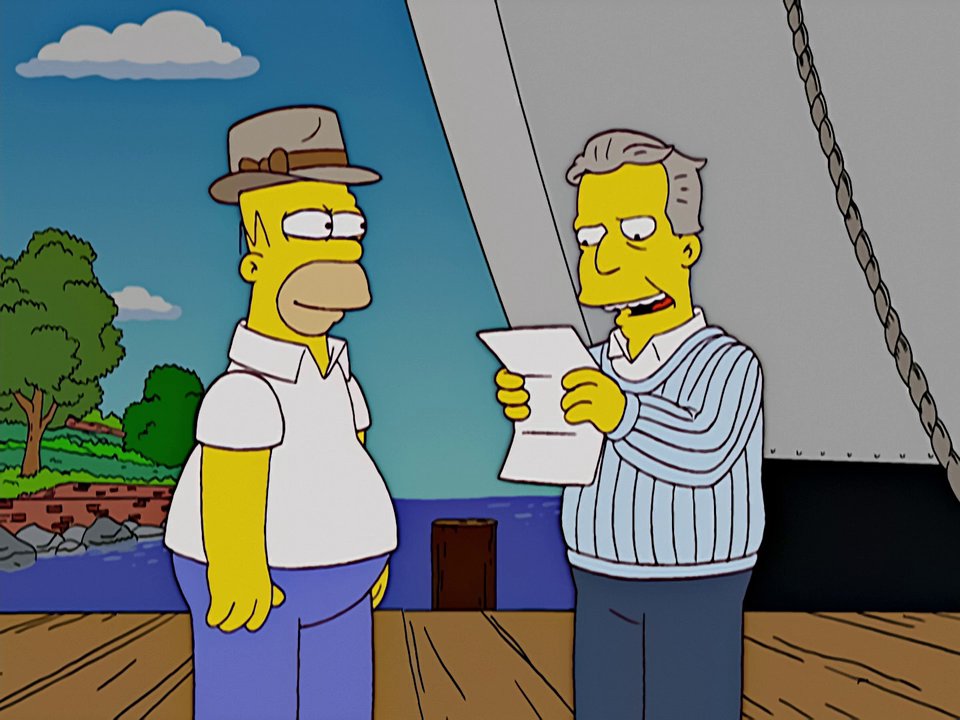 So yesterday didn’t start the week off nicely, did it? Yeah, things were rough. And let me tell you, things are going to continue that way, basically the whole week. We’ve really gotten stuck with some real clunkers. Case in point, this episode. Have you ever wanted to watch an episode that’s mostly just Homer devastating Grandpa’s feelings? Because that’s what we get!

The story starts off with an absolutely insane commercial for some sort of store in Springfield that specifically sells items that were damaged in fires. I have no idea what this is supposed to mean, but Marge is stoked about it, so she grabs Lisa and they head off to get some savings! Luckily for us though, they don’t make it, because as they drive to the store Marge gets completely derailed because of a new tollbooth on a road that she always uses.

Marge has a complete moral freakout about the tollbooth, and ends up veering off the road to use some short cut to avoid it. And the masses of Springfield follow her lead and ignore the toll too. And this is really pissing off Mayor Quimby. He’s furious that all of these cheapskates are avoiding the toll, and he tells Quimby to make it so people can’t avoid the tollbooth. And Wiggum knocks it out of the goddamn park.

He covers the road in tire-damage strip, blocks off the short cut with cement blocks, and basically makes the path to the tollbooth unavoidable. Which really bothers Marge the next time she goes on the road. She has a complete freakout, and ends up causing a massive accident on the road that ends with dozens of cars getting all four of their tires slashed by the strips. This obviously causes a flood of mechanics to come to the cars, take all of the shredded tires, and toss them on the Springfield Tire Fire.

Which has some interesting effects. The sudden uptick in carbon emissions from the Fire ends up causing some localized global warming that ends up melting the very top of Mt. Springfield off. Which reveals something odd. A frozen mailman from the 1960s, who has a bag full of mail. So Professor Frink helps the postal service get the mailman out, and they vow to deliver all of the old mail to everyone. 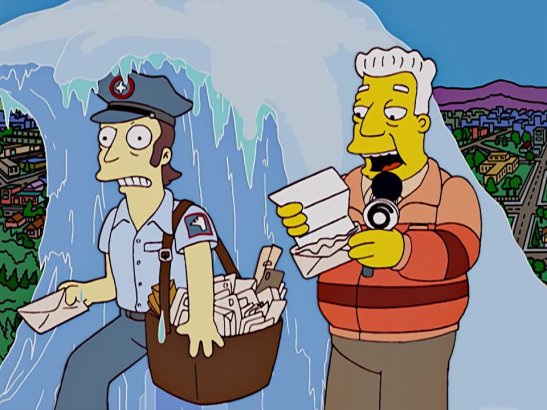 So what do we think we learn? Well, we see that Mr. Largo got into Julliard and didn’t have to be an Elementary School band teacher, we see that Moe isn’t allergic to pollen and could have played with other kids, and the Simpsons get a letter meant for Mona. Grandpa decides to open the letter up, and they’re treated to a hell of a shock. It’s from a mysterious lifeguard who claims to have been a lover of Mona’s, and at the end of the letter the man claims that Mona’s son is his. Uh oh!

Everyone is very uncomfortable about the revelation that Abe may not be Homer’s father, but they all kind of skirt around the issue until Lisa suggests they take a DNA test. To which Grandpa steadfastly refuses. And this leaves Homer with no alternative than to go to the library and look up a book of Springfield lifeguards. And Homer leafs through it until he finds the person that probably sent the letter, a man named Mason Fairbanks who still lives in Springfield.

Homer then tracks down Mason Fairbanks and his goddamn mansion. He decides to pretend to be a reporter, and ends up chatting with the charming British man. Mason shows Homer all around the mansion, and shows him all the treasure that he gets from his main job as a deep sea salvager. Homer continues to get more and more impressed by Mason, and when he sees Mason’s giant ship he finally breaks down and admits why he’s really there.

Homer tells Mason that he may be his father, and Mason is actually super excited. He was indeed the man who had an affair with Mona, and it all tracks, so the two immediately decide that Mason is probably Homer’s true father. So Homer races home to tell his family that he’s found his new dad, while Grandpa is awkwardly there. But Homer just ignores the man who raised him, and tells the family that they’re all going to go hang out on Mason’s boat the next day.

So the family go out for an afternoon sail while they meet Mason. And everyone is quite charmed. Especially when Mason tells them that he’s currently hunting for some sunken Spanish emeralds. And after that little bit of foreshadowing they decide to take Mason home for dinner, and awkwardly run into Grandpa who is still waiting for them. Grandpa freaks the hell out at Mason, and starts yelling at him about stealing his family. And Marge tries to calm everyone down by insisting that they take a DNA test to figure this all out. And this time, Grandpa agrees. 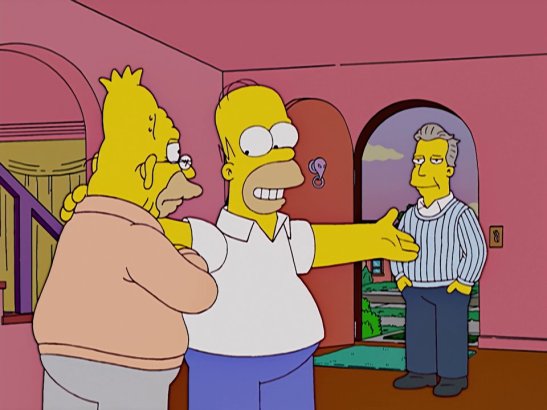 Homer, Mason, and Grandpa then head to Dr. Hibbert to get their tests done. And, much to everyone’s shock, the answer turns out that Mason is Homer’s actual father. Which Homer celebrates for, despite the fact that Grandpa is still right in front of him. But Homer doesn’t give a shit, because he has a shiny new daddy to hang out with, and completely starts ignoring Grandpa, leaving the rest of the family to awkwardly visit with him while Homer’s off having fun.

Because Mason has completely welcomed Homer with open arms. He’s even allowing Homer to hunt for those emeralds with him, giving Homer his own little personal submarine. The two head down into the depth, and just happen to immediately find the emeralds. So Mason’s sub grabs some emeralds, and Homer’s grabs the rest. However, as they’re leaving Homer gets turned around, and ends up getting lost in the middle of the ocean, crashing into some reef.

Homer gets trapped in his sub, unable to get it out of the reef, when things get worse. Homer’s oxygen begins falling in the sub, and he quickly loses consciousness. And while he’s passed out, he starts to have a series of flashbacks, all showing the great things that Abe has done for him. Because Abe actually was a pretty solid dad, who raised Homer single-handedly. So when Mason finds Homer and saves him, Homer realizes that he’s made a huge mistake. He wakes up in a hospital, and finds Abe waiting there for him. And Homer does the right thing, and apologizes for being such an asshole. Which is when Abe reveals that he’s actually his father, and that he switched the DNA samples because Homer was so excited for Mason. So everything’s back to normal. 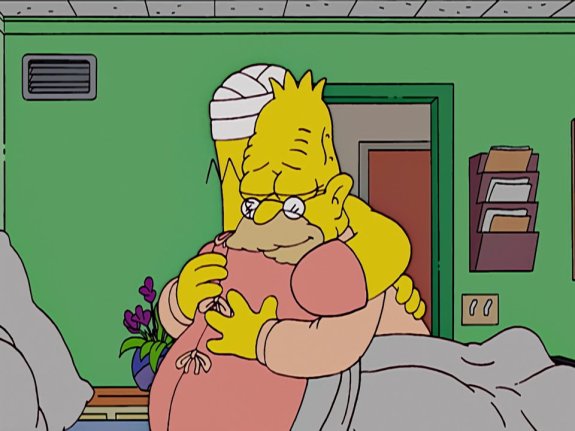 This episode bugs the hell out of me. It’s another one of those episodes that introduce a new character that radically changes the way these characters worlds are shaped, and then it’s quickly swept under the rug. And I’ll be honest, Homer having a new dad is much worse that Principal Skinner turning out to be someone else. But beyond that annoying structure that I can’t stand, this episode is just really unpleasant. Homer acts like a complete asshole the entire time, so eager to ditch Abe and act like he’s nothing to him. Because, even if Mason was actually Homer’s biological father, Abe fucking raised him! Abe did everything for Homer, and he just threw him away like he was trash. Yeah, Homer learns that lesson at the very last second of the episode, but it’s still so unpleasant. How many times were we going to see Grandpa sadly sitting there while Homer told him how eager he was to get rid of him? It’s just gross and really bothered me.

Take Away: Biology is nowhere near as important as the people who actually put in the work and raised you. Don’t be a dick to those people.

“Homer’s Paternity Coot” was written by Joel H Cohen and directed by Mike B Anderson, 2006.