Last week we got to start off with a fairly decent Treehouse of Horror episode. It was a nice way to start things off. And this week, oddly enough, we also get to start with a triptych episode. But this time it’s about Christmas! And kind of dreadful. Buckle up folks, because this is a really weird episode, with no structure or rules that just seems to go on forever! Oh, and in case you were wondering, the titles for the segments I’m using are what were on the Simpsons Wiki, because the episode itself didn’t have any titles whatsoever. And the titles are pretty bad. 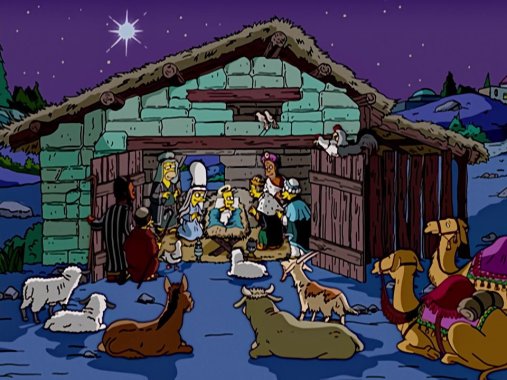 Our first segment starts off with the family joining everyone else at church for a Christmas morning service. However, disaster strikes when Reverend Lovejoy fails to show up, being too occupied with his model trains. So, with no other option, he calls Ned and asks him to give the Christmas sermon. But Ned almost immediately cuts his hand on his notes, and faints from the blood. So everyone’s without a sermon again. That is until Homer steps up and decides that he can give a sermon about the birth of Jesus.

We then get Homer’s loose recollection of the story with him as Joseph, Marge as Mary, and Bart as Jesus. We see Homer get the news that Marge is pregnant, despite being a virgin, before getting visited by the angel Lisa who gives them the rundown of what’s going on. Meanwhile we see the Three Wise Men (Hibbert, Skinner, and Frink) visit Mr. Burns as King Harrod with gifts for the messiah. And when Burns realizes that it’s not him, he orders his men to find the baby and kill it. Which is going to be easy, because Homer and Marge are nearby at Moe’s hotel where they’re having to give birth to Bart in the manger. Which goes off without a hitch, letting us then get a bunch of dumb jokes about parenting, like the baby being fussy for no reason, but with the added bonus of magical powers. And that little tableau is destroyed when King Harrod and his soldiers show up outside, ready to kill the messiah. However, Homer, Marge, and Bart are able to escape the men by sticking Bart’s halo on a duck and watching as the soldiers chase the glow, not knowing what they’re actually chasing. And then, to ensure their escape, Homer cuts down a fir tree, which is in the desert, and drops it down on Harrod and his men, accidentally creating a Christmas Tree. You know, like the Bible!

Hey, you know what would make sense? If all of these stories were ones Homer was telling in his sermon. But apparently that’s not the case, because our next story has absolutely nothing to do with that setup, and instead in a story that Grandpa is telling Bart and Lisa back at the house about why he hates Santa Claus and Christmas. His story starts off in World War II, where Grandpa and his brother Cyrus (who has never been mentioned, and will never be mentioned again) are serving on the same battleship in the Pacific. Despite Grandpa having fought in the European Theater. Their ship is attacked my kamikaze planes, and they have to separate to fight them off. It appears that Cyrus’ plane gets shot down, and Grandpa flies into a rage, only to have his ship shot down, landing on a deserted island. But it’s not just Grandpa, he also has his gunner, Mr. Burns.

So Grandpa and Burns are trapped on a deserted island, and just have to survive on the island for months. Until Christmas Eve, when something insane happens. They appear to see an aircraft flying past the island, and they shoot it down with their machine gun, causing it to crash onto their island. They go investigate, and find that they shot down Santa’s sleigh. They chat with Santa, and decide to help him rebuild his sleigh, since he promises to rescue them after he’s done. However, as soon as they’re finished Mr. Burns betrays them and knocks Santa out to steal the sleigh. Luckily he left one of the reindeer behind, so Grandpa jumps on it and ends up having a dog fight with the sleigh, until he jumps off of it and knocks out Mr. Burns. They return to the island, give Santa the sleigh, and he leaves. Never to return. Santa never saves Grandpa and Burns, and they apparently had to save themselves with a coconut jet ski. So that’s why Grandpa hates Santa, and the kids are not buying it. Until Santa actually shows up, gives Grandpa Cyrus’ lucky pocket watch, and lets him know that Cyrus didn’t die, and he’s been living in Tahiti for years. So Santa and Grandpa go visit Cyrus is Tahiti, and have a lovely time. The end!

Our final segment it probably the worst, and the one that I had the most trouble writing notes for. I mean, it’s kind of hard to explain it. It’s just people singing about what they’re doing to the tune of Nutcracker songs. It’s just the people of Springfield getting into goofy antics while singing about how much they hate Christmas. We get to see the family hide from Grandpa on the holiday. Then we see Moe try to kill himself by hanging and then gunfire before just having a nice meal with Barney. Then it ends with Homer and Marge hanging out by the fire on Christmas Eve before realizing that he forgot to buy Marge a present, so he runs through the town trying to find something to get her. And he fails. Until he finds that Marge’s gift to him is a gift for her, since she knew he’d forget. Which is so depressing.

What a weird a baffling episode. I really have no idea what’s going on with it. Typically I like the episodes that use the Treehouse of Horror formula, but this one is just so strange. It doesn’t have any structure, despite setting it up like it could have one. Why wasn’t this episode just Homer telling Christmas stories for a sermon at the church? That would have made so much more sense. But instead we got this insane episode with a lackluster first Christmas story, a terrible Grandpa story, and then some random scenes to fill out the runtime. That Grandpa episode is so weird. It’s like the episode just forgot that the Hellfish episode laid out Grandpa’s WWII exploits so well, and then just changed all of it for this terrible story. They even introduced a random sibling for Grandpa, only for him to never be mentioned again. And I don’t even know what to say about that last segment. There’s just nothing to it! I kept waiting for something to start happening, but it’s just random thoughts that connected to nothing. Just a real turd of an episode, and not a very good start to the week.