One of my favorite types of episodes of the Golden Age of Simpsons were episodes that revolved around Homer and Lisa’s relationship. They were usually all guaranteed to be pretty much perfect episodes. But, oddly enough, the inverse usually wasn’t true. Nor that common. Episodes about Bart and Marge’s relationship just don’t really exist that much, and when they do they don’t tend to be that great. Oh, well look what we have here! One of those!

The episode starts off with the family heading to some Coney Island-esque place called Paradise Pier, mostly to just relive some of Marge’s childhood memories. But that proves to be difficult, because Paradise Pier is closing that day, and they’re actively taking it apart. That’s not going to stop the Simpsons though! They just ignore all of the demolition and repossession going on and keep on trying to have a good time.

They watch the workers try to destroy the three stacked milk bottles to limited success, we see Homer ride the bumper cars and go off the track until he smashes into Wiggum, Eddie, and Lou, and we see Bart beg for a magnesium sulfate bath to increase his vitality. But actually important things start to happen when Homer buys a single barbell from the strongman and Marge buys a tandem bicycle so that she and Homer can go on rides together.

Unfortunately when they get home it turns out that Homer hadn’t been listening, and has no interest whatsoever in riding a tandem bike with Marge. Especially since he seems to really be into using his little barbell, but only on his right arm. And it’s not just Homer, no one wants to ride the bike with Marge, causing Bart to lie and say he’s busy and Maggie to just pretend to be asleep. So, left with no alternatives Marge decides to ride her bike by herself, which is the saddest thing in the world.

So sad that it actually makes Bart feel sorry for his mom, and decide to be nice for once. He comes to her and tells her that he actually wants to ride with her, which clearly makes her goddamn year. The two begin riding all around town, having a great time, and they even stumble upon some weird little hamlet called Springshire that appears to be a Victorian English town nestled in Springfield. But they have a quaint little tea-house, so Bart and Marge head on in to get tea and cakes.

Oh, but if Bart and Marge drinking tea isn’t exciting enough for you, we also have a weird B-Plot with Homer brewing. Because it turns out he’s been non-stop lifting that weight to the point that his right arm is ridiculously jacked. So much so that Moe decides Homer should be professional arm-wrestler, and basically be a ringer. They even invite the Rich Texan into the bar and make Homer look like the biggest pansy in the world, until the actual arm-wrestling takes place and he wins handily. So now Homer and Moe have a nice little scam to run!

Meanwhile, things with Bart and Marge are getting even more adorable. They begin spending basically all of their time together, to the point that he even starts blowing off Milhouse. But things take a turn when they head back to Springshire one day and find that the tea-house is closed. Marge assumes that that will be the end of their little friendship, until Bart suggests that they just turn his treehouse into a tea-house, which really takes Marge aback. 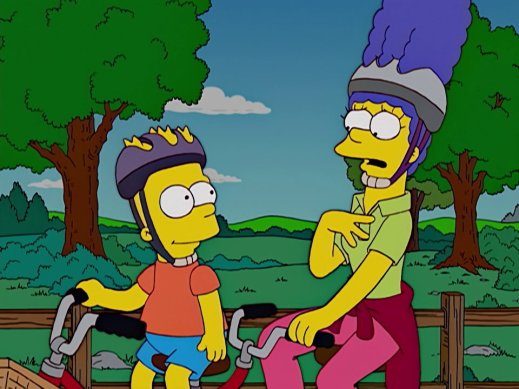 Marge really thinks it’s an honor to be invited up to Bart’s treehouse, and even starts to class it up, giving it wallpaper and cross-stitched sayings. However, even though the treehouse is ready, they still don’t have a nice tea set, so they head out to the mall to get one while Homer and Moe head to some big arm-wrestling competition. And while they’re at the mall getting a Krusty tea-set, Bart runs into Jimbo, Dolph, and Kearney who begin making fun of him, calling him a mamas boy.

And this turns out to be a really bad thing, because it causes Bart to flip out, and over correct. He starts acting like he’s still a bad-boy, and when Marge tries to act like they’re friends he freaks out and tells her that he only hung out with her because he pitied her. He then goes and rips up the treehouse while Marge falls into a pretty ridiculous depression, just walking around town with the tandem bicycle by herself.

Bart pretty quickly realizes that he’s made a huge mistake though, and goes to apologize to Marge. He even suggests that they participate in some sort karaoke contest that the Elementary School is putting on. Marge thinks this is a great idea, and goes to some sort of karaoke store in the mall to pick out the song that they should sing. And while she’s there she runs into Principal Skinner and Agnes, who are being their usual creepy selves, talking about how great it is for a son to be obsessed with his mother.

So the night of the karaoke contest comes, and Bart is all excited to sing with his mom and wear matching costumes. But as the night goes on and Marge watches Skinner and Agnes up on the stage singing “Ebony and Ivory” together, she gets a vision of how sad and pathetic Bart will be if he remains a momma’s boy. So she tells him she doesn’t want to hang out as much, and that he should go back to being a hell-raiser. Which he does gladly. But it’s all okay, because Homer’s bored with being an arm-wrestler already, and is more than happy to hang out with Marge now.

I more or less liked this episode. Like I said up top, there aren’t that many great episodes that revolve around Bart and Marge, and I’m not really sure why. The relationship between a boy and his mother is an interesting one, and should be just as rife for good stories as Homer and Lisa’s relationship, but for some reason we just don’t have many of them. And this is a pretty solid one. I like the idea of Bart recognizing that Marge is sad, and deciding that he’s going to actively try to make her happy by spending time with her and finding a common activity. That’s pretty great. And I do believe that the idea of the bullies picking on him for being a momma’s boy is a really realistic direction for that story to go down. It’s that last act that strikes me as a little odd. I don’t think that spending time with your mom when you’re a kid is necessarily going to make you a creepy weirdo like Skinner. That’s a whole other level of dysfunction there. Because by the end it seemed to be saying that boys should like their mom, but not want to spend time with them. Which doesn’t really make any sense. But whatever, there was a good set-up, they just didn’t stick the landing.

Take Away: It’s okay to find common ground with your parents and actually spend time with them as people, not just parents.

“Marge’s Son Poisoning” was written by Daniel Chun and directed by Mike B Anderson, 2005.