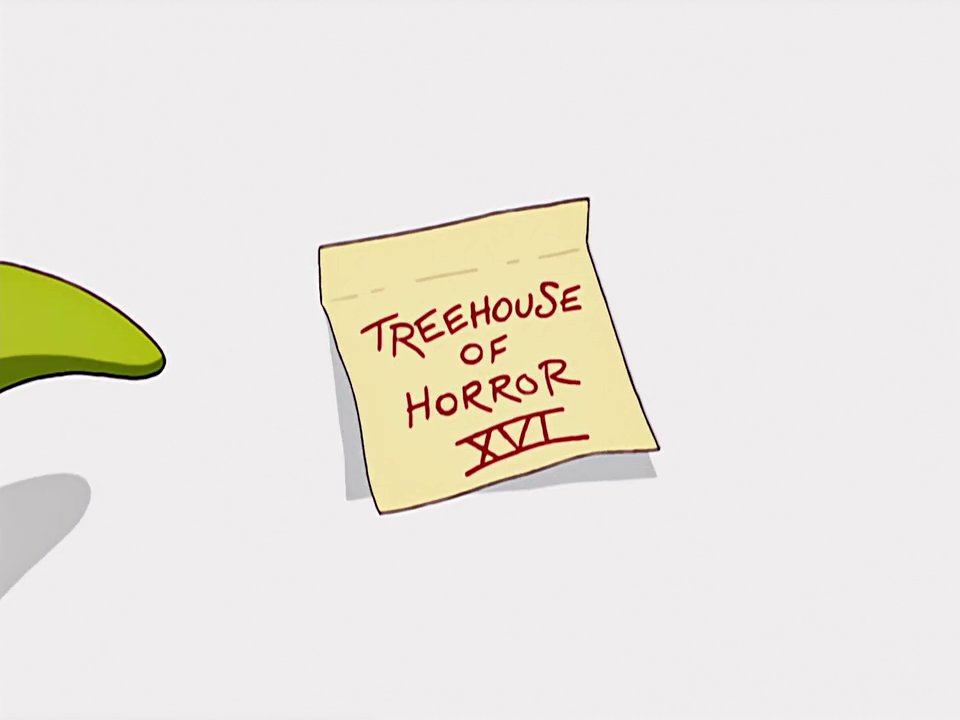 Last week was a little odd, what with us entering Season Seventeen without the loving embrace of a Treehouse of Horror episode to user us in. But, the law of averages has shined upon us, and we get to start the week off with Season Seventeen’s Halloween Special. Which begins with Kang and Kodos being furious that they’re having to wait for the Treehouse of Horror episode because the World Series is dragging on, and they hate baseball. Which was a super relateable feeling for teenaged me. So the two aliens do the only thing they can, and use a device to accelerate time. Unfortunately this still makes baseball boring, and has the unanticipated side-effect of causing a rip in time and space while results in the destruction of the universe. Whoops! Well, let’s get to the stories. 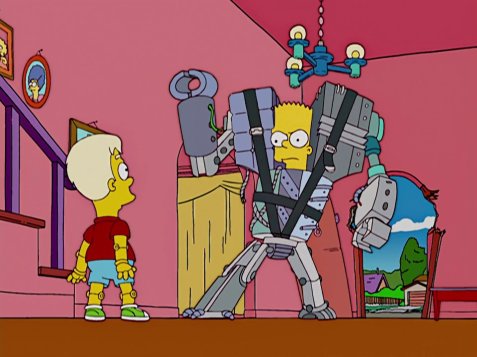 Our first story, which is timely in no way whatsoever, begins with Bart and Lisa being bored at Patty and Selma’s apartment while Marge helps them coupon. And while they’re bored Bart decides to try and jump from the window into their pool. He fails, smashes into the pavement, and falls into a coma. They rush Bart to the hospital, but there isn’t anything they can do for him, so he’s just trapped in a coma. But, Dr. Hibbert has a suggestion for them to deal with their grief. They can just buy a robot son to replace Bart! And, very quickly, they decide that this is a good decision, and order one up. It arrives, and is instantly helpful and kind, which means the family basically turn it into their slave. But it doesn’t seem to mind, so everyone’s happy!

Except Bart, who finally wakes up from his coma right as the family gets used to David the robot. So Bart heads home, finds the family loving on the robot, and get incredibly jealous. The family then decide to try and hang out with both children, giving it a go. But it doesn’t work out, so they do the only thing they can, and abandon Bart in the woods. But fortune smiles on Bart when he’s took in by a gang of discarded robots, spending the night partying with them and hearing their stories. And when they power down for the night he harvests their parts to build himself a war-mech to fight David with. So Bart heads home, with his robot suit, and battles David, until he’s finally able to cut him in half. He also cuts Homer in half, but that’s just collateral damage I guess. And it all works out, because they take David’s bottom-half and just stick it on Homer, so things work out great!

Survival of the Fattest 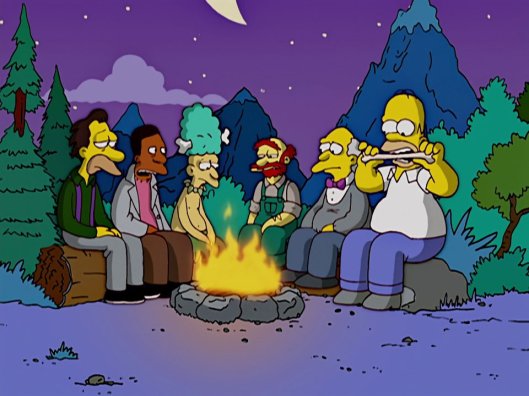 Our second story, while not quite a scary story, is quite a lot of fun. It starts off with Homer getting a special letter in the mail from Mr. Burns. It invites him to a party at Burns’ private estate, so Homer and a bunch of other dumb dudes from town show up and have a fancy dinner. Unfortunately after dinner Mr. Burns announces that he had an ulterior motive to inviting all these randos to his house. He plans to hunt them for sport. Which is apparently legal since killing people is part of his religion. So he gives everyone a five minute head-start and starts hunting them.

And from there the rest of the segment is really just Mr. Burns killing people in ridiculous ways as it’s revealed that Fox is airing this as the World Series of Manslaughter, complete with Terry Bradshaw commentating. He kills Apu, who then get reincarnated as a rabbit and then immediately dies again. Then some dude try to hid in a tree, until Homer’s weight drags it down and flings them into the air so Mr. Burns has skeet shoot them. And he just weeds them out until it’s down to just Homer. Burns and Smithers go to track Homer down, and briefly get confused by Homer marionetteing Barney’s corpse as a distraction, but then they find him. And just as Burns is about to shoot Homer at point-blank, Marge comes out of nowhere and knocks both Burns and Smithers out with frying pans. So Homer’s safe now, and the two have sex in the woods while Terry Bradshaw watches.

I’ve Grown a Costume On Your Face 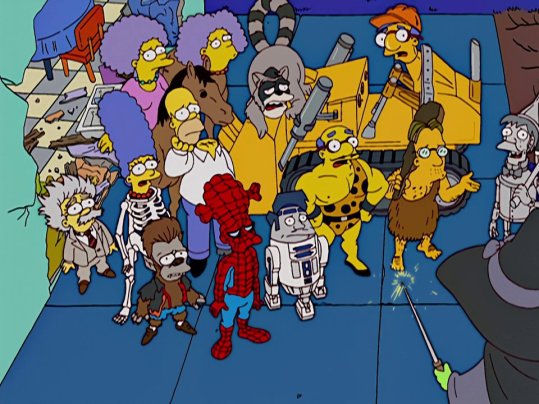 Our last segment is really goofy, and feels kind of like it should be the plot of a Goosebumps book, but it’s full of a ton of great sight-gags. And it starts off with the family, and basically everyone else in town, hanging out in the Town Square and having a costume party. Homer’s dressed as a headless man, Bart’s a werewolf, Marge is a skeleton, Maggie is a witch, and Lisa is Albert Einstein. And they all watch Mayor Quimby give out the prize to the costume competition, which is given to a witch. But it turns out that she isn’t wearing a costume, and she’s actually a witch. This infuriates the town, who think she should give back her gift certificate, causing her to curse them all. She casts a spell, and everyone in town actually becomes the costumes they’re wearing. Which causes chaos immediately. The town falls apart in what appears to be seconds, and the Simpsons head home to figure out what to do. Now that Lisa is Einstein she’s actually a genius, and she begins trying to formulate an answer. Which she does when she sees that Maggie actually has magic now that she’s a real witch. So they plan on getting the whole town together to change them back. Unfortunately not everyone in town wants to be changed back, and everyone starts fighting. So, confused, Maggie just turns everyone into town into pacifiers, and flies away, fleeing the situation. Which obviously means that Moe has to end the episode by talking about the horrors of adult illiteracy with Dennis Rodman. Happy Halloween!

As far as Treehouse of Horror episodes go, this one wasn’t particularly strong, but it was still a good time. Season Seventeen’s been off to a pretty awkward start, so it’s nice to see them at least stick the landing with this episode. I’m still stunned that they thought an Artificial Intelligence parody was going to topical in 2005, but it was a fine little story and a couple good gags. The whole Most Dangerous Game parody was probably my favorite, even though it was completely stupid. I guess I just enjoyed seeing so many stupid men from Springfield dying in ridiculous ways. And I think that last segment could have been really great, it there was more to it. It felt really truncated, like it was significantly shorter than a normal Treehouse segment. There were some great sight-gags as we saw what the people of Springfield had been turned into, but other than gags there’s just not much to it. But overall I had a good time, and it was a nice way to start off our last week of 2017.

Take Away: Don’t jump out of windows, don’t go to rich people’s houses for unexplained get togethers, and don’t insult witches.

“Treehouse of Horror XVI” was written by Marc Wilmore and directed by David Silverman, 2005.

Tagged as: 2005, Lifetime of Simpsons, Season 17, the Simpsons, Treehouse of Horror XVI