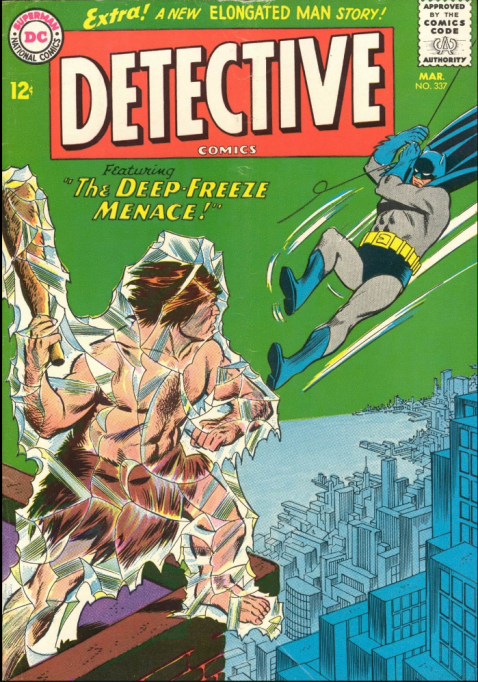 Howdy everyone and welcome back to another installment of Bat Signal, my ongoing project wherein I read random issues of Detective Comics with no real context. And this week my random generator has blessed us with a real fascinating little bit of Silver Age nonsense. Unfortunately unlike Halloween when I happened to pull a spooky Scarecrow story, we weren’t lucky enough to get some crazy Christmas episode today. But we do get some absolute goofy action involving an unfrozen caveman. Sadly, he’s not a lawyer, but trust me, whatever you’re picturing this story to be, it’s somehow weirder than that. Oh, and in case you saw the title of “Deep Freeze Menace!” and were disappointing that were weren’t getting a Mr. Freeze issue, don’t worry, because this issue more than makes up the ice-pun quota that Mr. Freeze stories normally provide. Anyway, let’s get to it and figure out why this caveman is in Gotham and wanting to fight Batman.

The issue starts off, appropriately enough, 50,000 years ago in the time of cave people. We see a caveman called Klag venturing out into the unknown to find a thief called Brugg, who has stolen his tribe’s food. Klag gets the drop of Brugg, and the two begin tussling, having a drag-out fight where the two just club the bajesus out of each other. It’s a tense fight until Brugg the thief gains the upper hand and manages to knock Klag off of a cliff. Klag falls a considerable distance, and somehow lands in a cave, where he’s apparently instantly covered in ice. This pulls a Steve Rogers on him, and he’s cryogenically frozen. But that’s not all, because the cave that he’s in also seems to have some sort of magical stalactites that drip some sort of chemical down on Klag for centuries, marinating him in magical powers. And there Klag waits until present day (1965) when an earthquake opens his cavern and he’s suddenly brought back to life. Although he’s also still encased in his ice, which is apparently flexible and allows him to move and breathe. 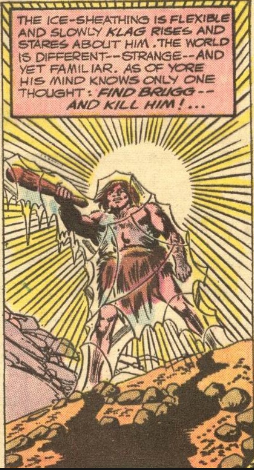 Yep, now that Klag has been reborn in the twentieth century, his first and only goal is to continue tracking down Brugg and kill him for stealing his tribe’s food. Which is going to be easier than before, because whatever it was that dripped on him all those centuries has also given him several vague and unexplained powers! All of which Klag seems to instantly understand how to use. He thinks for a little bit and conjures up a mental image of Brugg and he instantly takes to the sky, flying around the world. I’m not exactly sure how this ability works, but he’s somehow able to find someone on Earth who looks like Brugg, and ends up getting to India where he finds a Sikh hunter whose tracking a tiger. And just like that Klag comes soaring down from the sky and just starts beating up the poor Kikh, who has no idea what’s going on. And with the element of surprise Klag is able to easily overpower the hunter and knock him out. At which point he realizes that this isn’t actually Brugg, and uses his powers to find another person who looks like Brugg. And he just so happens to live in Gotham City.

So Klag flies through the skies with assistance from lighting, and ends up getting to Gotham, where he promptly just begins smashing everything he can find. And this bizarre occurrence is enough to earn a call from Commissioner Gordon to the Dynamic Duo themselves, who don’t seem fazed at all that a goddamn caveman is tearing up Gotham City. So they hop in the Batcopter and fly to town, trying to find Klag. Which isn’t that hard, since it turns out he’s actively searching for Batman. That’s right, turns out Bruce Wayne also looks like Brugg. Which leads to an awkward encounter when Batman first arrives and the caveman calls him Brugg. Bruce mistakes that as his own name, and kind of gets thrown off his game, assuming that this random caveman somehow knows his secret identity. The two fight for a bit until Robin shows up and tries to gas Klag. Unfortunately the sheath of ice surrounding him is able to breathe in the gas, and then pump it back at Robin, knocking out the Boy Wonder. And once that’s taken care of Klag rips off Batman’s mask, sees that he’s not actually Brugg, and flies away again. 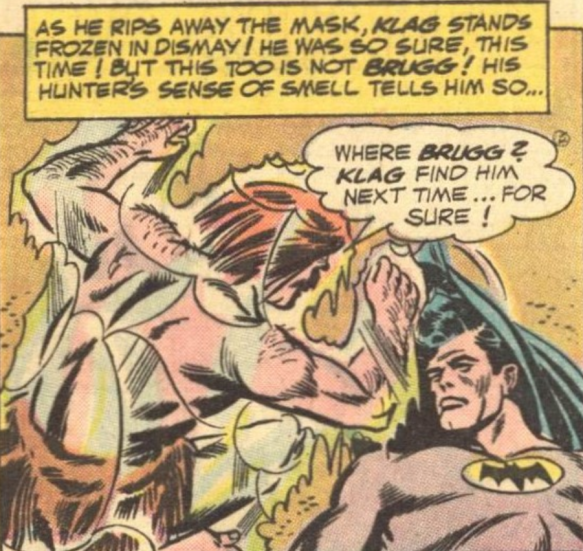 So Klag flies off again, trying to track down another Brugg possibility, and the Dynamic Duo return to the Batcave to assess what the hell just happened. The find some of the ice that surrounds Klag and bring it back to the cave with them, and begin running some tests while they talk out what Klag was doing. Their tests somehow explain that Klag was entombed in magic ice and now has powers, so with that out of the way they try to figure out how to find him. Bruce manages to get a fax from Interpol with the picture of the Sikh hunter, and realizes that he looks almost exactly like him. And with that information Bruce figures out that Klag is hunting people that look like him, and it just so happens that Klag’s been spotted heading into Spain. So Batman and Robin grab a tank of plastic sealant, hop in the Batplane, and head out to Spain.

And they somehow get there just as Klag is landing in the middle of a bull-fighting arena in Malaga, Spain. The lead matador is also a veritable clone of Bruce Wayne, and therefore Klag’s target. The caveman lands in the arena and starts to approach the matador, ready to attack him just like the other two, until he’s suddenly stopped by Batman and Robin, who show up just in time. And they immediately spring into action. Since they saw Klag breathe in Robin’s knock-out gas through the ice, they surmise that there’s porous holes in the ice that allow Klag to live. So they’re just going to spray him down with sealant, covering up the holes until he suffocates! Easy peasy! Batman and Robin then fight with Klag, slowly cutting off all of his oxygen with the sealant until he finally can’t take anymore, and collapses in an unconscious heap. The issue then ends with the ridiculous statement from Batman that they’re going to thaw Klag, teach him English, and rehabilitate him, which i have to assume is something that we never got to see, and I’ve incredibly sad about that. Yeah, I had  a whole lot of fun with this one. It doesn’t feature that much detective work from Batman and Robin, nor does it really feature any of the other Silver Age tropes that I love, like the Dynamic Duo running around in the vast woods outside Gotham not really accomplishing anything. But what this issue does have is a time-displaced caveman with undefined supernatural powers who has a vendetta against all men who look like Bruce Wayne. And that’s just insane enough to really work for me. I mean, just the scene of Batman mistakenly believing that the caveman knows his identity was enough to get me on board. It’s almost like that ridiculous scene in Batman v Superman: Dawn of Justice with that Martha bullshit, but here it’s not taken seriously and is fun. There’s not much to this issue, but it’s a whole lot of fun, features a completely absurd closing thought, and was just an enjoyable-as-hell Batman story, and that’s kind of all I’m looking for in this world.

“the Deep Freeze Menace!” was written by Gardner Fox, penciled by Carmine Infantino, and inked by Joe Giella, 1965. 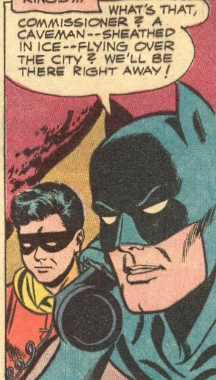