Wow, what the hell? Season Sixteen has been off to an interesting start, and other than the Treehouse of Horror opener, basically every episode has revolved around Marge. That’s odd in and of itself, but they’ve also been three very different Marge episodes that have brought her back to the character she really was in the early seasons. They haven’t really been episodes about her being an nag, and have actually made her a character again. What a concept!

The episode starts off with the super silly gag of having Homer eat one of Santa’s Little Helper’s pill because it was wrapped in cheese. But we don’t have a trip to the emergency room in our future, because as they’re dealing with that turn of events they’re shocked to see an armada of news vans driving down their street. Which obviously means that the Simpsons should drop what they’re doing and go follow those vans.

So they chase after the vans and end up in the Town Square with everyone else, finding out what the gossip is. Turns out Mayor Quimby has been served with 20 different paternity suits, and has created a hell of a media circus. Everyone wants to gawk at Quimby’s lack of morals, even though he tries to distract them with cute puppies. But there’s one journalist who doesn’t fall for his tricks, a national news anchor named Chloe who refuses to back down and gets some answers from Quimby.

And it turns out, Marge knows Chloe. They used to be good friends in highschool, and haven’t seen each other in years. Chloe manages to provide some evidence of Quimby being a slime, and ends up getting a lot of praise from everyone in town. Which obviously starts to make Marge a little depressed, realizing that she didn’t do as much as Chloe with her life. Which is made even more apparent when she runs into Chloe and the two make awkward chit-chat that ends with Marge inviting Chloe over. 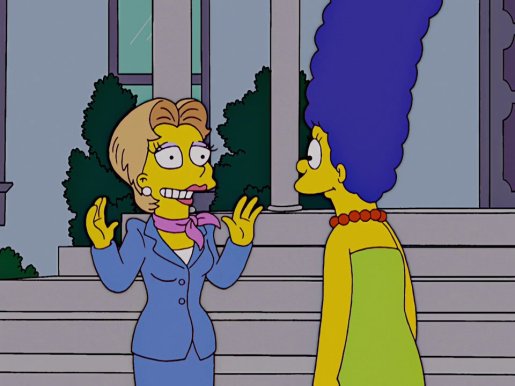 So Chloe comes over to the Simpson’s house and quickly makes everyone love her. She brought delicious kebabs and is full of interesting anecdotes that drop names like crazy. She tells them about travelling the world and meeting important people, and the family is enraptured. And Marge is really starting to feel defensive. Especially when Chloe makes them watch her interview with Bob Dylan that has a segment where she basically mocks how sad Springfield is.

And to make matters worse for Marge, Lisa obviously becomes fascinated by Chloe. She starts wanting to be exactly like Chloe, and starts pressing Marge for information on her new idol. Marge tells Lisa all about Chloe, and how they were best-friends and worked together on the school paper. They ended up catching Moe spitting in soup, and ended up getting certificates of merit. However, even though they were both accepted into journalism school after high-school, Marge stayed with Homer and had Bart, and Chloe left her high school boyfriend, Barney, and made something with her life.

So Lisa continues being obsessed with Chloe, which continues to bother Marge. She even goes to have lunch with Chloe at the Springfield Press Club, making fun of Kent Brockman with Tom Brockaw. And that night when Chloe is driving Lisa back home the two talk about Lisa skipping school the next day to come with Chloe to a conference in Capital City. Which is made difficult when they get home and find that Marge has been drinking and stewing in low self-esteem, which is going to lead to some issues.

Marge yells at Chloe for keeping Lisa out so late, and showing her a glamorous life that she can’t provide, and the two quickly start to get pissed at each other. They yell at each other, which Marge complaining about how her life didn’t go anywhere, and Chloe not wanting to empathize. It even escalates to the point that they start having a physical fight, beating the hell out of each other. And boy is Lisa ashamed.

So once the fight is over Marge tries to talk with Lisa and explain things. Lisa doesn’t really want to hear Marge’s side, and asks about going with Chloe to the conference. Marge forbids it, and puts Lisa to sleep. Which is when Lisa decides to do something she’s never done. Go against her parent’s wishes. She sneaks out that night, and heads out to the Press Club where Chloe is waiting, hiding in her trunk so that she can go to the conference with her.

However, while Chloe starts to drive to the conference she gets a call from her producer and learns that there’s been a change in plans. Mt. Springfield has apparently started to erupt, and that’s a much more impressive story, so Chloe starts driving towards an active volcano. Meanwhile, back at home, Marge has found out that Lisa ran away that night, and she gets Homer so they can drive to Capital City and bring Lisa home, not realizing that Chloe has changed plans.

So Chloe gets to the volcano, which is actively blasting lava everywhere, and Lisa pops triumphantly out of the trunk. She’s baffled by the turn of events, but Chloe runs with it and makes Lisa her camera-girl since the real operator ran away from the lava. So now Lisa is in a whole lot of trouble. And that news is just reaching the women’s conference when Marge and Homer get there. They look at the news, realize that their daughter is in danger, and flip the hell out.

Homer and Marge drive to the volcano while Chloe and Lisa get in increasing amounts of danger. Marge manages to get to the stop that they were transmitting from right when things start to go pear-shaped, and the lava threatens to kill them. So Marge summons a lot of will and runs across the lava to save Lisa. She doesn’t save Chloe however, who is stuck on a tree that’s slowly melting into the lava. But she doesn’t die, because right before she slips into the lava as well she’s saved by Barney, who apparently still has a helicopter from several seasons ago. So Chloe goes back to her life, Lisa is impressed with Marge, and Marge becomes a local hero. 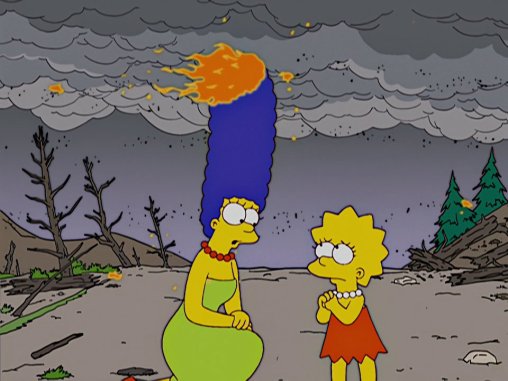 There’s not really anything wrong with this episode, but it doesn’t do a whole lot for me. I don’t really like to see Marge this jealous and vindictive, but it does make sense. Marge is pretty fulfilled in her life, being a loving mother, but it totally tracks that she would be jealous of a friend that went down a different path and has a seemingly more glamorous life. Normally those types of plots have us learn that the successful friend isn’t as happy as Marge, and that not having a career and having kids is the true path in life, and I’m super glad they didn’t go that route because that’s some bull shit. But as it stands we just see that Marge and Chloe went down different paths, and are actually equally happy. Lisa isn’t that impressed with her mother’s life at first, which is completely believable, but I really like the idea that she comes to appreciate her mom in a whole new way that she never has before. It’s a pretty sweet ending, and actually pairs rather well with the other Marge episodes we got this week. Let’s see if this trend continues next week as the show gradually becomes about Marge!

Take Away: People have many different paths to happiness, and just because someone leads a different life than you doesn’t mean that it’s a better life.

“She Used to Be My Girl” was written by Tim Long and directed by Matthew Nastuk, 2004.