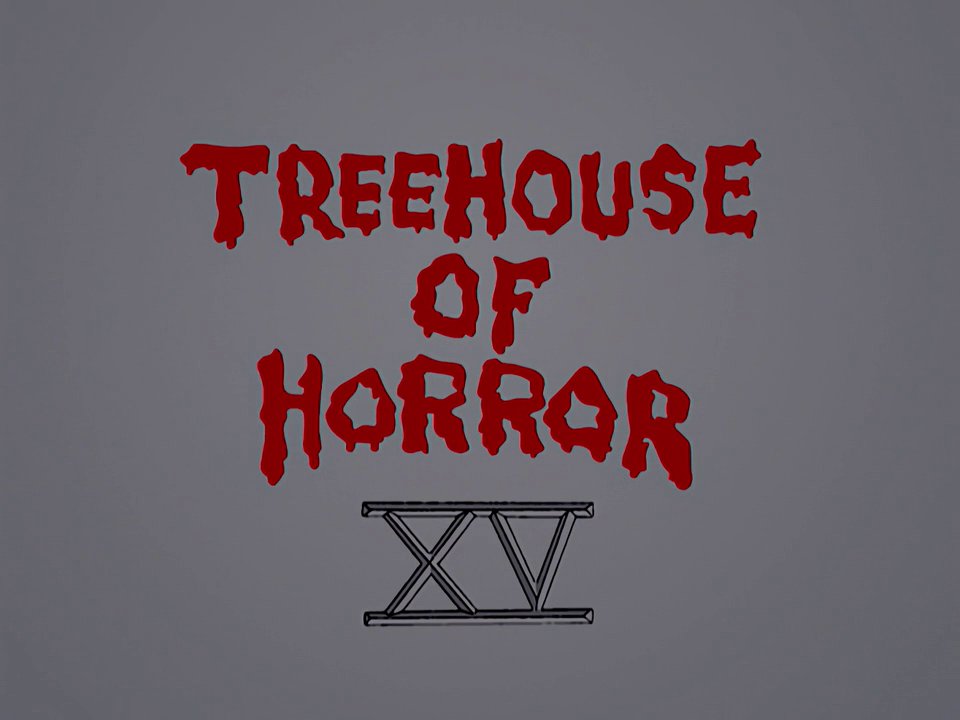 Well folks, here we are. Another season has bitten the dust and we’re ready to climb another mountain. Season Sixteen is here, and as has happened the last couple seasons that means we’re opening up with a Treehouse of Horror episode. Once again we don’t have a wrap-around plot, which continues to bum me out, but we do get a super insane opening that functions like a terrible 80’s sitcom with Kang and Kodos. They try to cook the Simpsons into a suitable meal for their visiting boss, which does go well. Except for Bart bursting out of the boss’s stomach, but that just means Kang and Kodos can adopt him and get a goofy theme song, so I guess it’s all good. Anyway, let’s get to the stories! 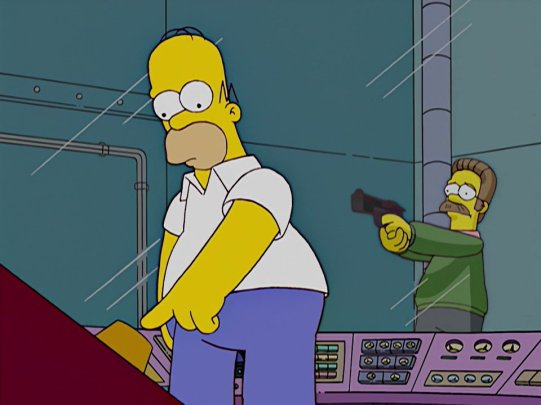 Our first segment begins with Homer trying to get a Frisbee off his roof by chucking a bowling ball up there. And, of course, disaster strikes when the ball misses its mark and ends up smashing onto Ned’s head. They rush Ned to the hospital to deal with the horrific concussion, and it ends up being good news. Apparently Ned had a crazy brain tumor and the ball knocked it out. So Ned’s okay! Oh, and he can also tell the future when he touches people’s hands. He shakes hands with Hibbert and sees him falling to his death. Which happens almost immediately while Hibbert is trying to get Homer’s Frisbee off the window-ledge. This freaks Ned out, and he begins wandering around town, afraid about his new powers. Which gets confirmed when he touches Moleman and sees him getting devoured by crocodiles, which happens immediately as Moleman falls down a manhole.

So Ned becomes terrified of his new gift, and confides in Homer about it. Homer obviously thinks that this sounds cool, and touches Ned, making Ned see a vision of himself shooting Homer to death. Ned decides that he needs to move in order to save Homer’s life, but when Homer hears the way that he’ll die he realizes he has to test the theory. He ends up getting a gun from Chief Wiggum and gives it to Ned, messing with him. Although Ned just tosses the gun into some sort of wood-chipper, and ruins the prediction. Homer’s saved! Well, until Ned touches him again and sees that now Homer will die by causing a nuclear explosion that will destroy the town. And wouldn’t you know, Homer immediately leaves to go to the Plant for Lenny’s birthday. So Ned chases after Homer, and ends up finding him in some special glass room with a button that causes nuclear meltdowns. Ned tries to get Homer out, but it isn’t working, so he has to grab a security guard’s gun and shoot him. Ned’s saved the day! Except Homer falls on the button and kills everyone anyway. But they all get to go to heaven and hangout with God, so I guess that’s cool. It’s also the second Treehouse of Horror in a row that has a segment where God shows up. Odd.

Four Beheadings and a Funeral 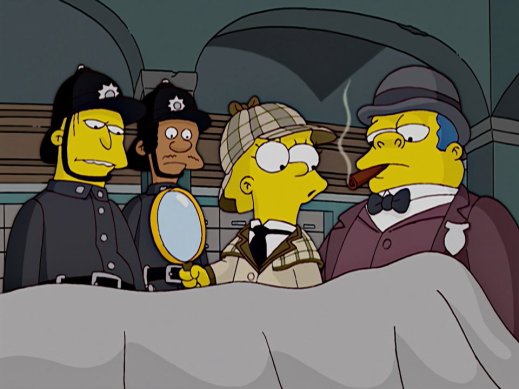 Our second segment is really goofy, and takes place in Victorian England. Which obviously means that it’s time for Jack the Ripper! Or the Muttonchop Murderer as he’s being called. Whatever. We see that Inspector Wiggum is heading up the investigation and trying to ignore the infernal sass of the hotshot detective Eliza Simpson and her companion Dr. Bartly. Yep, we have a weird Sherlock Holmes parody. Let’s roll with it. We see that Wiggum just wants to arrest Apu since he’s the darkest guy they could find, and calls the case closed. But things are complicated when Marge shows up as a Cockney flower-seller and gives them the murder weapon, a crazy jeweled dagger. So Lisa takes the dagger and heads out to a Curiosity Shop owned by Comic Book Guy to see if he recognizes the dagger. Comic Book Guy says its part of a set that was recently sold to a rich person, and goes to find a ledger to find the owner of the daggers.

Unfortunately Comic Book Guy is stabbed to death by the killer while finding the ledger and Lisa just misses the killer. She does find the ledger though, and finds that the swords were bought by Mr. Burns, who is now a hardcore opium addict. So they head to Moe’s opium den and meet with Burns, who recollects the daggers, but admits that he sold them to a fat man with sideburns. Just like the guy right there! They turn around and find Homer lurking in the opium den, and start chasing him through the den. But Wiggum saves the day when he trips Homer, and collars the killer. However as soon as they leave Bart and Lisa run into Selma, who has recently been killed by the killer. So it can’t be Homer. But Lisa does notice something about the blade that tells her the identity of the real killer. So Lisa and Bart head to the execution of Homer, and confront the real killer. Chief Wiggum. He’s apparently been behind all of the killing in order to create a case that not even Lisa could solve. And he’s failed. But he does escape by a commandeering a hot air balloon, which is then destroyed by Kang and Kodos in a steam-powered UFO.

In the Belly of the Boss 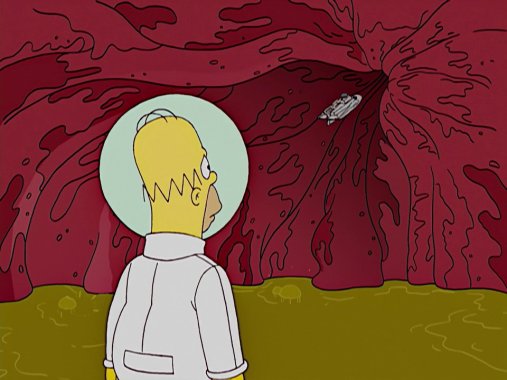 Our final segment for this season’s Treehouse of Horror is probably the weakest, and functions just as a parody of Fantastic Voyage. Things start out at a Springfield Invention Expo where the Simpsons are checking out Professor Frink’s new miracle vitamin. He’s packed a lifetime of vitamins into one giant pill, and is going to shrink it down so that you only need one vitamin. Unfortunately as he’s working on it Maggie climbs into the pill, and is shrunk down right before Mr. Burns eats the pill. They realize what they’re done and Frink decides that they need to shrink the Simpsons down, enter Mr. Burns, and save Maggie before she’s dissolved by stomach acid. So the family head to Frink’s lab with Burns, get into a giant ship, and get shrunk down and inserted into Burns.

The family then cruise around inside of Burns, running into his heart and having a war with white blood cells that think that they’re invaders. The blood cells also rip off all of Marge’s clothes, which is ridiculous but accurate to that weird movie. Anyway, they take a nerve impulse down to the stomach and are able to save Maggie right before she’s dissolved. Unfortunately her added weight is too much for the ship, so they have to leave Homer behind in order to escape. So the family leave Homer, get out into Frink’s lab, and start to come up with an idea on how to save Homer before the shrink ray wears off and he grows to regular size inside Burns. But that doesn’t work, and Homer ends up growing and filling up Burn’s body. This doesn’t kill either of them, and they decide to just continue life with Homer inside of Burns, kind of like that early Treehouse of Horror episode when Burns get sewed onto Homer’s neck. But hey, they episode ends with characters from every segment getting together and dancing to “I’ve Got You Under My Skin,” so that’s cool. 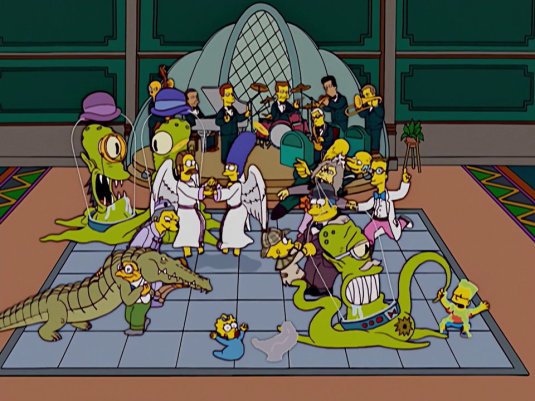 I really liked this Treehouse of Horror episode. They usually end up being pretty good, regardless of the quality of the rest of the season, and I think this is going to be no exception. I really loved the goofy opening with Kang and Kodos having a terrible 80’s sitcom, and I would legitimately love an entire Treehouse of Horror segment with that premise. And the rest of the episode isn’t half bad either. The Dead Zone parody was pretty solid, and I loved the idea of Ned finding out that he’s going to be responsible for killing Homer and then doing whatever he can to stop that future from happening. The second segment was definitely the best, even though it didn’t really fit in with a Halloween aesthetic, but whatever, any excuse we get to have Lisa be Sherlock Holmes and take down Jack the Ripper I’m going to take. Then there’s the last segment, which filled out the run time. So there we go, the beginning of Season 16. Let’s do this thing!

Take Away: Don’t throw bowling balls at people to unlock their latent psychic powers, don’t accept ceremonial daggers for opium, and don’t mess around with shrink-rays.

“Treehouse of Horror XV” was written by Bill Odenkirk and directed by David Silverman, 2004.

Tagged as: 2004, Halloween, Lifetime of Simpsons, Season 16, the Simpsons, Treehouse Of Horror XV