Hello everyone and welcome back for another week of Lifetime of Simpsons. We’re ending Season Fifteen today and entering Season 16 tomorrow. Although I will say that last episode definitely should have been the season finale. Having the Simpsons be arrested by the US government and flee the country is a little bigger than Mr. Burns going to was with the press. But what do I know, I’m just a dude who obsessed over this bullshit.

Our episode begins with Kent Brockman hosting a special report on some geological formation called Geezer Rock that looks vaguely like an old man’s face. It’s apparently a well-known landmark and has just been labeled a National Landmark. And this is enough to get the whole damn town to show up and look at the rock, since Springfield will meet and party for any reason, no matter how small. Just as long as they can get out of work.

Unfortunately while they’re all there pretending to appreciate nature, Lisa notices something. There appears to be a little sapling growing out of the Geezer’s eye, and when she tells her family about it Homer decides he needs to do something. Homer figures that the sapling will cause damage to the rock, so he starts climbing up to the Face while Lisa begins reading a poem that she’s written for the occasion while the whole crowd listens.

However the poem gets cut short when Homer yanks the sapling out of the eye, causing severe structural damage that end up causing the Face to fall apart, slide off the mountain, and land on Mr. Burns. But no one aside from Mr. Smithers really cares about Burns, they more care about the destruction of the landmark and the economic results that that will cause now that people won’t be flocking to check out that rock. 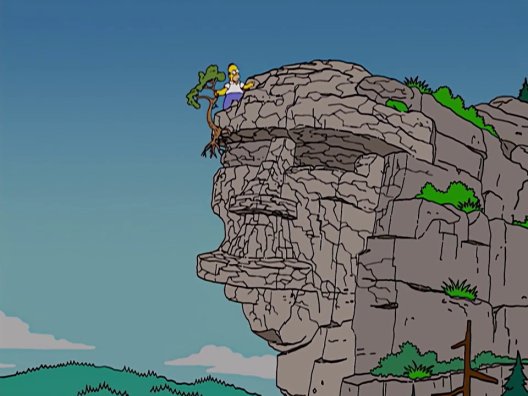 Lisa is distraught that people didn’t get to read her poem, which is a little selfish but whatever, and she spends the whole car-ride complaining about it. However, she finds a new cause when Marge suggests she forms her own newsletter about the rock, and publish it in there. She thinks this is a great idea and decides to get into the fabulous world of print journalism. Which will never die!

And Lisa isn’t the only person upset about the events of this day. Smithers in a goddamn wreck, sitting in Mr. Burns’ mansion just drinking himself to death. But he also gets an upper when Mr. Burns suddenly comes strutting into the mansion, alive. Turns out he survived the landslide, and ended up living in the rocks like a snake, sustaining on mole-milk, until he was able to slither out of the rocks and come home.

At the same time that this is going on Lisa is also taking a plunge into media. She’s written her little newsletter, the Red Dress Press, and circulated it around town. It appears to just be that poem she wrote, but the whole town reads it and loves it. They love it so much that they ask her if she’s going to keep it going every day. She easily could have said no at this time, but she doesn’t, and decides to make this newsletter her new passion, conscripting other kids from the Elementary School to help her and create a real paper.

Mr. Burns is doing well too. He and Smithers start traveling around Springfield and buying every local media source they can. They stop by Channel 6 and offer the owner of the channel a sack of money, women, and ice cream in exchange for the station. Then he gets KBBL and fires Bill and Marty. And he finishes it off by buying the Springfield Shopper, officially owning the town’s news. And once he has the control, he begins using it to make propaganda. He even makes an Itchy and Scratchy about how protesters are evil and nuclear power is wonderful.

And there’s no one left to stop him! Well, no one except Lisa! The Red Dress Press is now the only source of news in Springfield that isn’t owned by Burns, and she begins making a big deal about that while speaking out against Burns’ deeds. Which immediately gets her on his radar. So Burns decides that he’s going to have to buy out this little girl’s newsletter and tries to convince her to sell by bringing her to his office and sweetening the deal with dancing ponies. But Lisa remains steadfast, and refuses to compromise her principles.

So, logically, this means that Mr. Burns has to declare war on an eight-year-old girl. He begins having his goons attack Homer’s car while he’s helping the kids distribute the papers to the point that they end up getting pushed into a rattlesnake farm. And this is apparently a bridge too far for the rest of the kids, and they decide to bail on the paper. Well, except Ralph who got poached to write movie reviews for a real paper.

Oh, and there’s one other person who didn’t bail. Bart. He’s been the political cartoonist and he fully intends to stick with Lisa, which I guess makes their paper all cartoons and editorials, but whatever. They release a new issue of the newsletter with some very pointed cartoons that specifically call out Burns. The war continues. But Mr. Burns wants to play dirty, so he cuts the power to the Simpson’s house, making it so that Lisa can’t print the paper anymore.

But Lisa still isn’t going to give up! Skinner approaches her at school the next day and admits that he’s still a big fan of the Red Dress Press and gives her the school’s Mimeograph machine which will help her continue the newsletter. So Lisa has crossed another of Burns’ hurdles, and he now has to come up with another one. And this one is a doozie. He calls Homer into his office, drugs him, and starts pumping him for dirt on his own daughter.

And using that dirt Burns begins a smear campaign. Burns bullies Lisa with rumors until she finally breaks, and begins weeping. Which is where Homer finds her, and decides that he can’t let this stand. And because he has no other weapon, Homer begins writing his own paper, the Homer Times. So Homer distributes his paper which is primarily just him praising Lisa and saying she’s his hero, and he ends up spurring the rest of the town to start making their own newsletters, letting the town know what every nutjob in town thinks. Which I guess ruins Burns’ plot? He seems to give up at that point, so I guess everything is okay now.

I actually really like this episode. At first I had a bit of a hard time with it, since it almost seems like the recent episodes of the show are specifically messing with me in relation to the horrors going on in the world right now. I mean, I feel like it’s a matter of time before Trump tries to buy one of the newspapers that mock him. But let’s not focus on darkness, let’s focus on the fact that this is an episode that’s about Lisa using the power of the press to overthrow a tyrant. Which is pretty damned amazing. It also kind of calls the rise of social media and the ability for any lunatic to get their voice heard, which is less impactful, but whatever. And really, the thing that sticks with me is the ending. Not the stupid joke ending that gets pasted on with Smithers and Burns going on a shopping spree, I mean the emotional ending. Homer is spurred on to create his own paper because he saw his daughter being mistreated. And then he writes an editorial about how Lisa is his hero. Which is fucking beautiful. That’s some real emotional genius which in a good season would have been the end of the episode. But we’re now in a time where they need to stick some goofy stinger on the end of every episode in case we start to think that this show enjoys emotional stakes anymore. But we can ignore that and just love the morals of this episode.

Take Away: The power of the press is a phenomenal one, and we must treat it with respect.

“Fraudcast News” was written by Don Payne and directed by Bob Anderson, 2004. 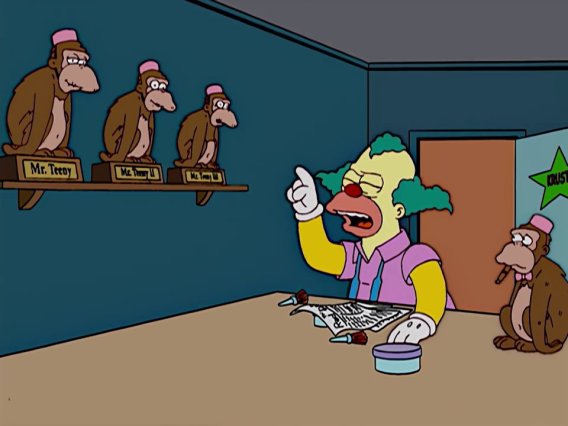 Tagged as: 2004, Fraudcast News, Lifetime of Simpsons, Season 15, the Simpsons