Oh boy. Oh man. You guys? This episode is a real goddamn bummer. It bummed me out when I watched it, on Sunday the 6th. But writing about it now, on the 11th, after everything in this country was turned upside down and we’ve been welcomed to a dystopia? Kind of the worst. Buckle up! We’re diving deep!

Our episode begins with Bart and Lisa happily sitting in the backseat of the car, enjoying ice cream and kittens that are being passed back from Homer and Marge. For some reason this does not raise any red flags to them, at least until they’re right in front of Dr. Hibbert’s office. That’s right, it’s time for inoculation season, and like all children in TV and movies, they’re terrified at the prospect of being briefly pricked by a needle.

So they’re brought into Hibbert’s office, and he begins gloating and taking sadistic glee in giving them their shots. He manages to get Lisa, and Maggie when no one is looking, but Bart turns out to be a harder target. Bart dodges all of the attempted injections, and then somehow escapes the office. This of course leads to a ridiculous montage where Dr. Hibbert follows Bart around the town doing everything he can to catch him and inject him, like he’s some sort of monster.

After the montage though we see Dr. Hibbert sadly sitting on the sidewalk in front of the Simpson’s house while Bart starts to feel sorry for him. Bart breaks down and walks over to Hibbert to gloat a little bit, until things get crazy. It turns out this was the most elaborate of Hibbert’s schemes yet, and the Hibbert on the sidewalk is actually Barney in a Hibbert costume, and the real Hibbert pops out from behind a tree and manages to stick Bart.

Which is promptly where things go wrong. Because for some reason the injection that Hibbert gives Bart starts an allergic reaction in Bart, causing him to go deaf. Hibbert explains that this was a possible side-effect, and tells them it will fix itself in a few days, but until then Bart is going to have to deal with being deaf. And things go alright at first. Homer keeps trying to prank him, the bullies get weirded out by him not backing down to them, and he just generally does okay being deaf.

Regardless, Marge tells him that after his one sojourn to the school, she doesn’t want him to go to school until the deafness clears up. But Bart shoots down this idea, telling her that the next day at school is some sort of ridiculous charity event where the children of the Elementary School play the faculty in a basketball game where they all ride donkeys. And now, I have no idea what that is supposed to be. I assumed it was straight-up gibberish, but a cursory Googling tells me that this is a thing that happens in our reality. So. Do what you will with that information.

Because it’s actually happening! Because Marge backs down and lets Bart go to the donkey game, and we see the students and faculty getting ready while a whole crowd of townsfolk gather to watch. And everything is transpiring like your typical donkey basketball game, until the pledge of allegiance begins. Because while everyone gets up to salute the flag, Bart is caught unaware, since he can’t hear. Instead, he’s pestering one of the donkeys, which causes it to bite his pants and run away. This leads to Bart seemingly mooning the American flag.

And as you would imagine from our weird country, people lose their goddamn minds. The crowd gets hostile, pictures are taken, and no one wants to believe Marge and Homer when they say that Bart is temporarily deaf and didn’t know that this was all happening. They just ignore all of that, and start hating Bart, claiming him to be an un-American monster. And by extension, so are the Simpsons. That’s right, the family are now pariahs! 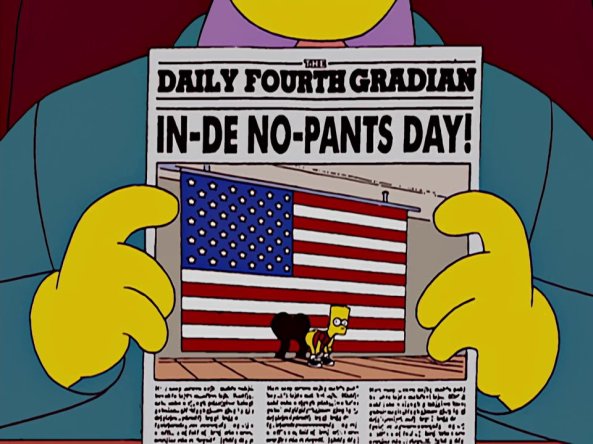 The Simpsons become straw-men in the community, earning all of their ire. They mock the Simpsons at the car-wash and the put-put golf place, and even the barflies of Moe’s start to hate Homer. Things get so crazy that they agree to go on some cable news show to tell their side of the story. Which surely isn’t going to go wrong. The family get there, and Bart tries to explain what happened while trying to suck up to the American people, all while the host berates and yells at them.

And that berating turns out to be a pretty bad thing for the Simpsons, because it ends up getting Marge so frustrated and fed-up that she ends up saying that she hates America. It’s taken out of context, and wasn’t even talking about America, but it’s a sound-bite and begins being passed around. The Simpsons are now known as haters of America. And for some reason, I suppose the transitive property, that means that Springfield hates America, which causes Springfield to become the most hated city in the country.

Springfield freaks the hell out at this sudden change in opinion, and just like when people tried to change French fries to Freedom Fries, they over-correct way too much. Because they go so far as to change the name of the city to Libertyville, and make the whole damn town as pro-American as possible. They change the street-light to red, white, and blue, Apu turns the Kwik-E-Mart into a shrine to America, and they even start worshiping America in church instead of God.

Unfortunately, the Simpsons are still now considered patriotic enough, so they’re arrested in church and taken out of the town. They end up getting black-bagged and wake up in a government detention facility with all sorts of other evil left-wing criminals, like the Dixie Chicks, Bill Clinton, Michael Moore, and Elmo. That’s right; the Simpsons are not the prisoners of an oppressive and conservative American society.

For a while they try to just survive in the prison, being forced to watch re-educational cartoon that talk about how the Bill of Rights should be gotten rid of. But things take a turn when they meet some crazy old Western prospector character who tells them that he knows a secret way out of the prison, but they’ll have to use it during the upcoming convict talent-show. Whatever, let’s go with it.

So the talent-show begins, and the Simpsons end up distracting the guards with some goofy patriotic song and dance number. And when the guards are properly distracted they sneak out, and head through an escape tunnel that gets them out of the prison, which turns out to be Alcatraz. So they begin swimming to San Francisco when they realize that they’ll just be fugitives there. Luckily a French barge is passing by, and they give the Simpsons a lift to France where they can continue to be free and hate American. They start loving France for a while, until they start to miss Springfield, and immigrate back to America as if they’re turn of the century immigrants. 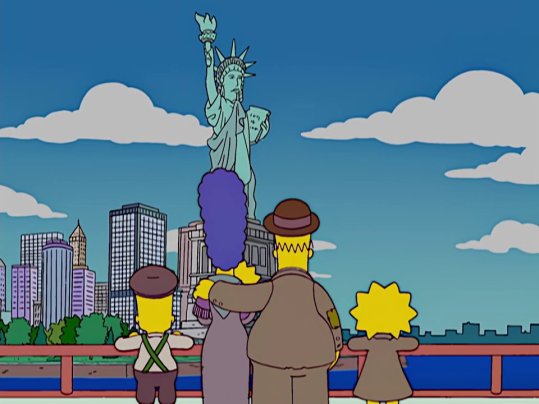 What the holy hell is with this episode? One of the things that I’ve liked least about this show as time has gone on is the fact that the premises have gotten further and further from reality. The Simpsons always had weird and surreal jokes, but the premises were usually things that could actually happen. But in this episode they become the most hated family in America, and are arrested and brought to a secret prison for Democratic celebrities. I get that this whole episode is an indictment of George W Bush’s America, and how after 9/11 we were all trying so hard to be American and perfect that we let all sorts of shady shit pass by, but even by those standards this episode is ridiculous. It’s all about how weird American are in regards to patriotism. Which we really are. Every person I’ve ever met from another country has been baffled at how we treat nationalism. Other countries don’t seem to care about their flags, their stupid anthems, and all that other stuff that we have such a weird fascination with. Just look at the football player so many people hate that refuses to stand up for our silly song. Who cares? Freaked out conservatives, that’s who. And in this world, where we know that we’re about to enter a period in American history that will put everything in Bush’s tenure to shame, this episode just bummed me the hell out. There probably are going to be secrete celebrity prisons pretty soon. I’m writing this article on a day when New Gingrich announced that we should bring back fucking HUAC. I don’t want to stay political and make this site a bummer, but holy crap was this not a good episode to fall into my lap when all of this is going on.

Take Away: Patriotism is silly, and you need to fight back against oppressive conservative policies.

“Bart-Mangled Banner” was written by John Frink and directed by Steven Dean Moore, 2004.

Tagged as: 2004, Bart-Mangled Banner, Lifetime of Simpsons, Season 15, the Simpsons