So this was a weird week, right? We started out pretty strong, but things kind of started to fall apart, slowly but surely. So what’s a more fitting way to end the week than by discussing this dull and weird Bart episode?

But what’s Bart up to? Why he’s wandering around in the flatware section of the store for some reason, and is introduced to the idea of bridal registries. An oddly helpful clerk explains the idea to Bart, and even shows him the little gun that’s used to pick things. So Bart walks up to a terminal, creates a fake registry, and starts wandering the store to scan everything he can. And he makes it look much more fun that actually dredging along at a Bed, Bath, and Beyond is.

So, Bart’s just wasted a day by scanning a bunch of crap he has no use for? Nope! Turns out his master plan is to orchestrate a fake wedding, invite everyone in town, and hope that they’ll give him all of the gifts so that he can return it for store credit and buy crap. And this somehow works. The whole town shows up to the predetermined spot with gifts, and head into a tent for a wedding. But when they get inside Bart seals the tent, and steals the gifts, having completed his diabolical plot!

Well, that is until Chief Wiggum busts Bart almost immediately and arrests him for the ridiculous fraud that he’s committed. So Bart is brought to court, and put before Judge Constance Harm again, who decides to be tough on stupid crimes, and send Bart to juvenile hall for six months. Which seems pretty steep for such a dumb prank, but whatever, they needed to send Bart to juvie, but I guess they didn’t want him to actually do something dire enough to deserve it.

Bart is then sent straight to juvie, where he struggles to get a hang of things. It’s basically just like prison, and it quickly starts to wear on Bart’s soul. He goes to a job fair to learn that now that he’s been in juvie his only career options are in fast food, and gets to watch an Itchy and Scratchy cartoon with all the violence edited out. But things really take a turn when he’s sent out to the violent playground, and decides to avoid all the gangs and violent children by leaning up against the fence that separates himself from the girl’s side of the prison.

And while Bart is standing there a group of girls show up, and attack him. Their ringleader, Gina, even ties him to the fence and cuts his clothes up with a blade, which seems like an infraction, but whatever. So things aren’t going great. And it’s made even worse after a visit from the family, when they see how depressed Bart is, and Homer decides to become a guard to spend time with Bart. I don’t know why they did this gag though, because Homer never comes back as a guard, and it’s dropped immediately.

But a plot actually starts building when Bart finds out that there’s a dance coming up where the boys and girls are forced to dance together. It seems to be based on the whims of the crazy warden, but whatever, Bart gets paired up with that Gina girl and the two have to slow dance for a bit. It’s very awkward and uncomfortable, which is made much worse when Gina realizes that the dance will be the perfect time to break out. She pulls off an elaborate escape, while Bart is chained to her, and they two end up out on the lam, even though Bart barely had any time on his sentence.

Once they’re away from the prison, Bart starts yelling at Gina, furious that she made him escape jail and become a fugitive. But Gina explains that she’ll tell everyone that Bart made her escape, and that it was all his idea if they get caught, so he has no choice but to go along with her and try to continue avoiding the law. So they continue to wander through the woods outside the prison as the town is informed on the breakout, and the Simpsons start to freak out.

But things take a slight turn with Bart and Gina when they hole up for the night in the woods, and start chatting and bonding. Gina explains that she’s in juvie basically forever because she apparently killed a Snow White actress at Disneyland. But whatever, it makes them closer. Which comes in handy when they stumble up a blacksmith in the middle of the forest and they get him to use his skills to create a key that will free them.

So Bart and Gina are freed, and briefly celebrate. Well, that is until Bart mentions Gina’s family, and she gets furious at him, running away by herself. Bart is confused at first, until he finally realizes that Gina has no one in her life, and nowhere to go now that they’re freed. He tries to confront her with his knowledge, and they just end up fighting. Which is when the police show up, and arrest them again. But Gina decides to do the right thing, and explain that Bart had nothing to do with the breakout, getting him freed. But Bart’s a good person, so he convinces his family to go visit Gina, and somehow have a family dinner with her to thank her for getting Bart off the hook.

I don’t know what it is about this episode, but it does absolutely nothing for me. I’ve discussed before on the site, but Bart episode just haven’t been cutting it for me on this view-through, and this episode is no different. The idea of sending Bart to juvie is so weird and dark, and the reason that he was sent was so frivolous that it just made the whole episode a little unpleasant. And then they didn’t’ even make it an episode about juvie. He’s barely there, and what little they do there doesn’t even end up mattering. I mean, what was the point of that Homer stuff? It didn’t matter, and didn’t even come back in any way with the climax. It was just pointless. And all the emotional stuff with Gina was so rushed and forced that it did nothing to me. I feel like if this episode was better crafted we would feel sorry for Gina and her lack of family, but it comes in at the last minute, and does basically nothing to redeem how selfish and terrible she is. It’s just a weird episode that left a bad taste in my mouth. Oh well, maybe next week will be better.

Take Away: Picking stuff for your bridal registry is super boring.

“The Wandering Juvie” was written by John Frink & Don Payne and directed by Lauren MacMullen, 2004. 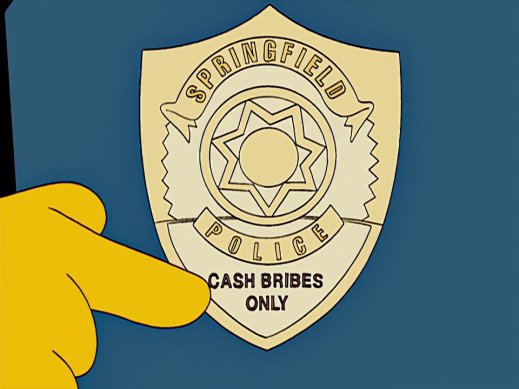 Tagged as: 2004, Lifetime of Simpsons, Season 15, the Simpsons, The Wandering Juvie