Hey everybody, want to talk about alcohol abuse and having fun with your spouse outside of your children? Doesn’t seem like those two topics are going to jive well, right? Well, let’s see!

Our episode begins with Kent Brockman reporting on the massive lines of sad people who are waiting to see the new entry in the Cosmic Wars franchise. Which seems like a weird joke for 2004. Maybe would have been more topical when Phantom Menace was out, but whatever, we see a whole bunch of Springfieldians hanging out in the line and waiting to see their stupid movie, and the Simpsons are front and center right behind Comic Book Guy. Oh, and Comic Book Guy is cosplaying as Randall Curtis, the George Lucas of this franchise, which is hilarious.

Anyway, they’re finally let into the theater to check out the Gathering Storm. Everyone settles in, and are almost immediately worried by the opening crawl, which is primarily about trade routes and tax disputes. But they figure that things will get better when the actual movie begins. Which it does not. The movie seems to entirely be Senate meetings, including a massive amount of roll-call time. And everyone is furious.

The people of Springfield come out of the theater, pissed that they wasted money on that terrible film, and while most people just let it go, Bart and Lisa can’t. They go home and fume about the stupid movie until Marge recommends that they send Randall Curtis some hate-mail. So they dictate a letter, send it in, and then receive a response. Unfortunately it’s a form letter response that ignores their complaints, so they decide the only thing to do is escalate things to an insane degree and go to Northern California to Curtis’ home and complain in person.

So the Simpsons head out to California, and Homer and Marge busy themselves by visiting a vineyard and getting day-drunk while Bart and Lisa go on a tour of the Cosmic Wars Ranch. They sit through a bit of the tour, mainly so the show can make fun about how lazy CGI characters are compared to practical effects, which is kind of a shitty blow to people who work on CGI, and the kids end up getting out of the tour to track down Curtis.

Bart and Lisa wander the Ranch for a bit, somehow finding themselves in Randall Curtis’ private office. He’s not that thrilled to be talking to two children at first, but Bart and Lisa insist on telling him everything wrong with his stupid movies, and somehow get to him. He promises to ditch all of the trade crap and go back to ripping off samurai flicks, and I guess that plot’s wrapped up. So Bart and Lisa leave the Ranch to go find Homer and Marge.

And when they find them, they’re less than thrilled. Because they’re trashed. Homer and Marge had a great time in the vineyard, getting incredibly drunk and just having a blast together. Bart and Lisa are a little surprised to see Marge this drunk, but it seemed like they had a good time, so whatever. And apparently they’re going to keep these good times going, because Homer and Marge bring a whole crate of wine home with them.

That’s right, Homer and Marge are winos now. They start drinking together all the damn time, getting drunk all over town and even going to Moe’s together to drink some monstrous expensive wine that Moe has. And all of this drinking starts to wear on the kids, since now they have no sober and reliable parents. But a combination of the kids complaints and the constant hangover convinces Marge that she needs to cut back on the drinking, and hang out with Homer in places without booze.

So obviously they go to Oktoberfest. Duh. Marge goes along with Homer to the Fest to spend time with him, and gets pressured into having just one beer. So they give her an enormous stein and end up getting her so drunk that Homer has to carry her out to the car. And Homer isn’t exactly sober either; he’s just less drunk than Marge. So of course he decides that he needs to drive them home. Surely nothing bad will come of that!

Oh, never mind. Homer and Marge get in a car accident almost immediately, and their car flips over in the middle of a ditch. And Homer starts to freak out. Marge is still passed out from the drinking, and Homer realizes that if he gets caught in the accident he’ll lose his license. So Homer decides to do the decent and responsible thing, and put Marge in the driver’s seat so she’ll get the blame and he’ll go hide in the woods. Class act! 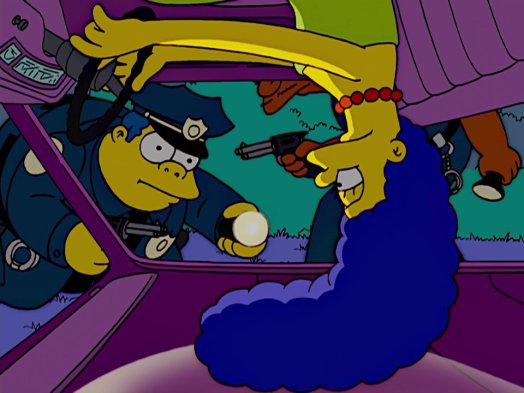 Marge is then brought to jail to dry out, and she instantly becomes depressed that she would endanger herself and other in such a manner. And since Homer doesn’t want to get in trouble, he keeps the lie up. And because Homer doesn’t tell anyone, except for Moe, what he did, the whole town starts to ostracize Marge as a horrible drunk. At which point Barney shows up and recommends that Marge go to a rehab center to get sober.

So Marge then goes to the rehab center for a while, and Homer is left with the kids. And almost immediately they start to realize that the whole scenario is pretty fishy, and start needling Homer. Homer finally breaks down, and decides that he needs to do the right thing, and heads out to the rehab place to do the right thing and get her out. And before he gets there, we see how miserable the rehab center is, and how unhappy Marge is.

But that unhappiness continues when Homer gets to the center and admits to her what he’s done. She’s furious at him, and storm away from him, heading back to a group therapy session that she’d left to fume. Apparently the fellow patients are alone though, because they break out some martinis that are hidden in Captain McCallister’s wooden leg, and start drinking together. But while she enjoys complaining a bit, Marge realizes that this drinking isn’t as fun as when she was with Homer. She realizes that it wasn’t the alcohol she was enjoying; it was the time with Homer. This apparently solves everything, and Marge leaves the rehab center with Homer, happy and in love, despite the horrible thing Homer did to her. 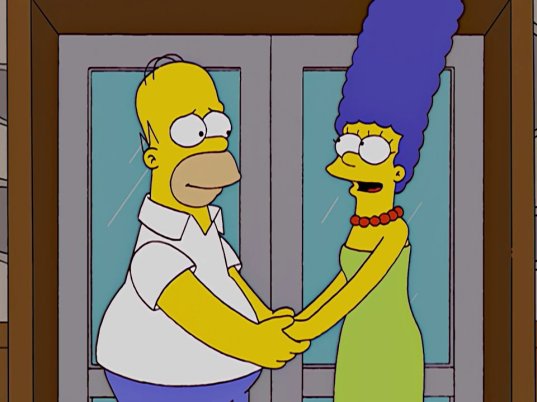 Man. What a weird episode. It’s just kind of a trainwreck. We start off with all this Star Wars bashing that didn’t seem timely at all, that ends up escalating to the point that the show basically becomes the writers yelling at George Lucas, and then George Lucas admitting that he’s wrong and the fans are right. And it gets crazier from there! The main plot with Homer and Marge is just so odd. I like the idea of Homer and Marge realizing that they should spend more time together having fun, and I think the wine thing makes a lot of sense. Right around the time this episode came out my own parents started getting into wine, and I have a lot of memories of going with them to weird wine festivals when they couldn’t get babysitters, and just hanging out in hotel rooms while they got smashed on wine. But things take a weird turn when Homer frames Marge for drunken driving. That’s just insane. And then they just brush it off at the end! This is a major thing, a huge betrayal, and Marge just ignores it because she realizes that she enjoyed spending time with Homer, as if that changed the fact that he did a horrendous thing.

Take Away: It’s hard to find common ground to hang out with your spouse, but maybe avoid framing them for crimes when doing so?

“Co-Dependent’s Day” was written by Matt Warburton and directed by Bob Anderson, 2004.

Tagged as: 2004, Co-Dependent's Day, Lifetime of Simpsons, Season 15, the Simpsons