Doctor Strange Was a Hell of a Trip 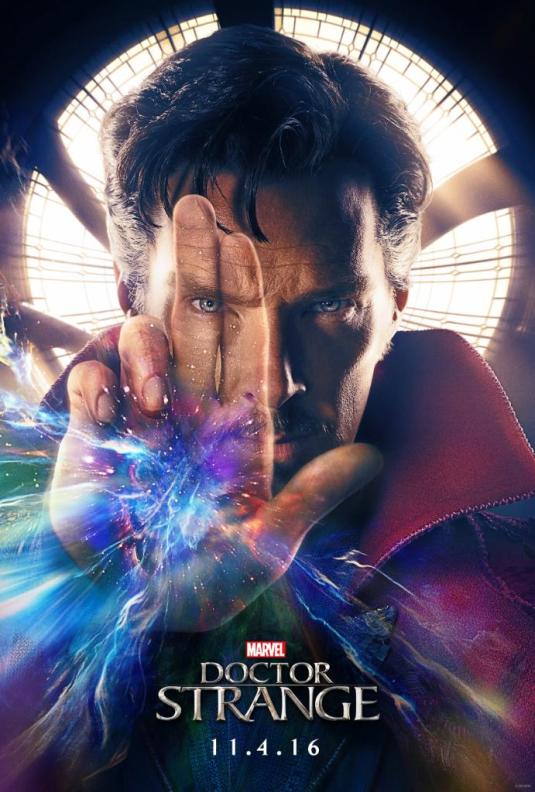 If you’ve read the site before, it’s pretty clear that I’m in the bag for Marvel. Both in terms of comics and the MCU film series, Marvel has always been my go-to for superhero fiction, and it’s characters remain my absolute favorite. So of course I’m going to always go check out a new MCU flick, and of course I’m probably going to enjoy myself. They would have to do something really drastic to make me not be into one of their movies, like have heroes that hate the very concept of heroism like those DC movies. Add in the fact that their latest, Doctor Strange, is about one of my all-time favorite characters and you can assume that I’ve been incredibly excited for this movie for quite a bit of time. Doctor Stephen Strange is a fantastic character and has been in some of the most clever and inventive comics ever published by Marvel, and his inclusion into the larger MCU promised to deliver something unlike any of the other films. Things have gone cosmic and they’ve gone Asgardian in the movie, but they haven’t gone mystical yet. And what better way to dive into the magical world of the mystic arts than with the Sorcerer Supreme himself? And I’ve got to tell you, this one exceeded my expectations.

The film follows Stephen Strange (Benedict Cumberbatch), a gifted and cocky neurosurgeon who is more interested in getting high-profile and high-paying cases than actually saving lives. He graces fellow surgeons with his presence and just generally acts like an obnoxious ass, but he gets results. This coes to an end though hen he has a car accident while driving around in upstate New York in a rainstorm, and the accident leads the destruction of his prized hands. Strange lives, and is in more or less fine physical condition, it’s just that his hands, and his livelihood are destroyed. So Strange becomes singularly obsessed with fixing his hands, doing everything that medical science can, and with no results. Which is when he hears about a man who had a similarly hopeless case that was seemingly healing perfectly by some great teacher in Nepal. So Strange packs his bags and heads to Asia in search of a place called Kamar-Taj. And when he gets there, after some consternation, he’s brought before the guru who can help him, the Ancient One (Tilda Swinton), and one of her assistants, Mordo (Chiwetel Ejiofor). The Ancient One explains that it’s not science that’s going to help Strange, it’s magic. He scoffs that this idea, and is then promptly tossed out of his physical body and sent on an insane and madcap ride through several different dimensions, teaching him the truth about reality.

Thus begins Stephen Strange’s education in the mystic arts. He’s allowed to study under the Ancient One in Kamar-Taj, meeting other disciples and getting used to the monastery. He bonds with the angry but focused Mordo, gets used to the stubborn keeper of knowledge Wong (Benedict Wong), and makes a quick study from the Ancient One. Stephen is adept at magic, and quickly begins studying everything he can, becoming a star pupil at Kamar-Taj. Which is when they tell him what’s really going on at the monastery. The Ancient One is the Sorcerer Supreme, this dimension’s greatest wizard who is tasked with protecting Earth from magical threats, primarily those of Dormammu and evil deity from the Dark Dimension. They also tell Strange that Dormammu has a human disciple named Kaecilius (Mads Mikkelsen) who has stolen some teachings that they believe will let him summon Dorammu to Earth. So, despite not being open to it, Strange gets pulled into this mystical war when Kaecilius begins waging war on the wizards, trying to destroy the four buildings called Sanctums across Earth that protect Earth from Dormammu. Steven ends up using the powerful Eye of Agamotto and the Cape of Levitation, becoming a far more powerful sorcerer, when he’s thrown into the Sanctum Sanctorum in New York right as Kaecilius and his men assault it. What follows is Strange quickly becoming a powerful sorcerer, fighting the forces of evil, and learning more about the truth of Dormammu, a vengeful deity that has tricked Kaecilius into worshiping him blindly. Strange begins working with Wong and Mordo to stop Kaecilius from merging our dimension with the Dark Dimension, which becomes even more pressing when the Ancient One is killed, losing Earth its Sorcerer Supreme. Strange and friends then fight against Kaecilius and his followers, which results in Strange having to use the full power of the Eye of Agamotto, which is reveled to be yet another Infinity Stone. This one is the Time Stone, and Strange is able to manipulate time with it, heading into the Dark Dimension itself to blackmail Dormammu. He uses the Stone’s power to trap Dormammu in a time-loop keeping him locked forever in one altercation with Strange, until Dormammu promises to stop his assault for his freedom. Kaecilius is vanquished to the Dark Dimension, reality is saved, Mordo loses his faith in the Ancient One’s teachings, and Stephen Strange becomes the Sorcerer Supreme, taking over for the Ancient One in the Sanctum Sanctorum.

I had a complete blast with this movie. As I’ve said before, Doctor Strange is one of my all-time favorite characters, so I was probably always going to enjoy myself with this movie, but it really became a tremendous distillation of what I love about the character. Which isn’t to say that there weren’t issues with it. It wasn’t perfect obviously. I was a little disappointing that the film was a complete origin story, mainly because it’s so similar to that of Iron Man. Although it’s really only similar to Iron Man in that it’s a Redemptive Asshole story. Once Stephen is redeemed his story veers wildly away from that of Tony. I would have preferred to have Stephen already be Sorcerer Supreme and then flashback to any relevant backstory, but that’s my own gripes and probably isn’t that valid when held against a movie-going public who probably knew absolutely nothing about Strange and needed everything explained. There’s also some serious issues with some of the side-plots in this movie, primarily that of Strange’s love interest. I didn’t even mention her in the plot description because that whole plot-line is so superfluous, but Strange does have a doctor that he has feeling for played  by Rachel McAdams, and that character does basically nothing in the film. They shoe-horn reasons for Strange to keep visiting New York and be with her, mainly when characters get wounded, and she just easily could have been taken out of the film. And, of course, the villain wasn’t that impressive. Marvel has issues with their villains, as has been examined countless times before, and Kaecilius is pretty cookie-cutter. He’s just an excuse to get to Dormammu, since they can’t really make the Lord of All Darkness the villain in the first movie. Although, I did appreciate them making him a sort of cult member who actually believed in the good word of the Lord Dormammu. He wasn’t trying to destroy the world, he genuinely had been tricked and though that he was helping humanity, which could have made him more sympathetic if they’d examined that a bit more.

But none of those complaints were enough to distract me from a truly unique and thrilling film. Despite some character quirks, everyone involved in the film acted the hell out of the movie and completely sold all the mystical mumbo-jumbo that they had to get across. We were given a story about a true hero. I know I harp on this all the time, but Doctor Strange’s whole goal in this film is to save people, not kill bad guys. He feels terrible when he kills one of Kecilius’ men, and then does everything in his power to make sure no one dies in the climax. Stephen is fully prepared to spend an eternity being tortured by Dormammu if it means Earth will be safe. He doesn’t even want to kill Dormammu and Kaecilius. He makes a bargain so that not a single life is lost. He separates himself from the rest of society, prepared to become the solitary Sorcerer Supreme, watching over Earth and making sure that no one dies from a mystical threat. There wasn’t enough incantations for my taste, but they portrayed the Marvel version of magic in a fascinating way, full of beautiful effects and mandalas of energy. And the set design was spectacular. I’ve always loved the Sanctum Sanctorum, and they made it this beautiful museum of mystical artifacts. For a while I was worried that the movie was going to be too focused on the work of Steve Ditko, and keep everything around the aesthetic of the Dark Dimension in his seminal comics, but the movie really borrowed from the the characters entire history, and melded several different and bizarre dimensions together, giving this movie a look unlike any previous Marvel movie. There were trippy 2001 visuals mixed with MC Escher-esque world-manipulating in the Mirror Dimension. And the colors! By the Hoary Hosts of Hoggoth the colors! This movie was beautiful, bright, and optimistic. It had humor, action, mystery, and mysticism. It was unlike any of the other Marvel movies besides the surface-level similarities with Iron Man, and introduced us to a weird and magical new corner of the MCU. And I’m excited to return.