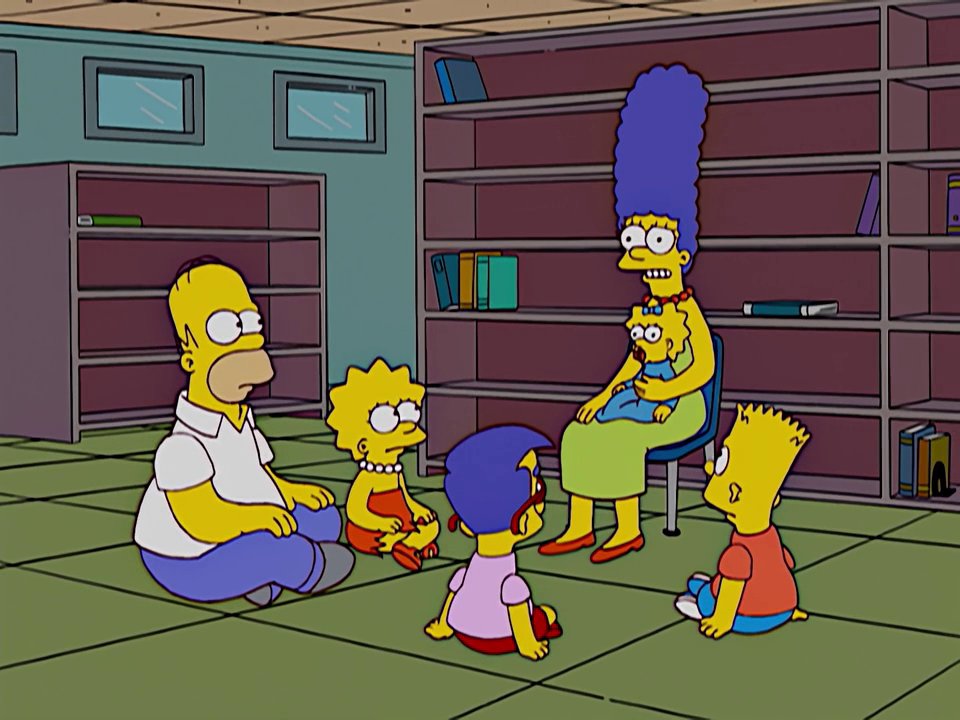 Well everyone, we’ve made it through another week of Simpsons. And it wasn’t too bad. I think we’re getting to the point of the show that I maybe dipped out of, but the episodes haven’t been too objectionable. And we’re ending on a fun note. Another one of those triptych episodes that drive me insane because they get to have wrap-around plots, but the Treehouse of Horror episodes don’t. This week we get to see Marge bring Bart, Lisa, Maggie, and Mihouse to the library so they can all research famous people for history papers. Unfortunately it seems like the Springfield library has phased out the actual books in their building, and because I guess the internet isn’t a viable option, they have to rely on Marge to tell them all about the famous people of their choice. 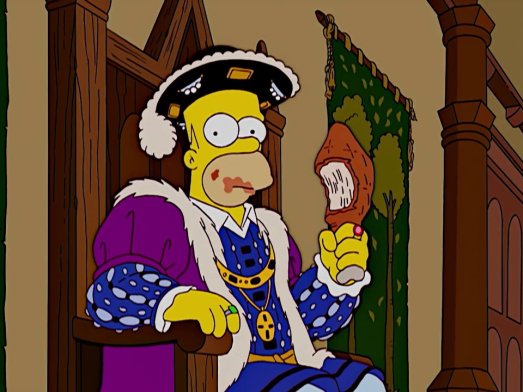 Our first story is for Milhouse, and it’s about the famous glutton/king Henry the VIII, who is obviously played by Homer. We get to see Homer stuffing his face on food and enjoying his kingly right of being a perv, when he realizes that he still hasn’t had a son from his current wife, Marge. And when royal physician Dr. Nick tells Homer that Marge’s womb is full of monsters, he decides he needs to find another source for an heir. And he finds it in Anne Boleyn, who is Lindsey Naegle. So after skipping through some marriage counseling from Dr. Hibbert he goes to Cardinal Flanders and demands a divorce. And when Flanders refuses this as a Catholic, Homer decides to fire him from a canon and form his own religion. He divorces Marge, marries Anne, and start making heirs. Unfortunately the first one comes out a woman, so Anne gets her head cut off, and Homer just starts speeding through new wives, desperate to find one that can make a boy. He rapidly marries a woman with an annoying voice, Otto, some random woman, and Agnes before seeming to give up, and having them all put to death. And as the story ends, Homer is on his death-bed, son-less, and speaking with old Queen Marge, who accepts Homer’s apology before smothering him to death.

Milhouse then has all the information he needs, and happily skips out of the library before being tripped by Nelson, who just steals his research.

Next up is Lisa, who decides to write about the then topical American Indian icon, Sacagawea. So Marge thinks back and decides to tell the story of Louis and Clark, here played by Lenny and Carl, and their trip to the West Coast. They quickly establish that the American explorers are terrible, and are quickly going to die left to their own devices, so they stop by an Indian village and decide to take Sacagawea, Lisa, and her sketchy French fur-trapper husband. Lisa then quickly tries to whip them into shape, teaching them about all the lovely things in America that are about the kill them, including how to survive mountain lions. And because Lenny and Carl are clearly idiots, Lisa ends up taking over the journey and basically running everything. They cross the country, getting Milhouse killed by Bart’s gang of Indians, and make it down the Columbia River before Lenny and Carl decide that they don’t like Lisa anymore. They decide she’s bossy, and kick her out of the group, so she goes to sulk. Unfortunately when she’s off by herself a goddamn mountain lion show up, and it looks like she’s about to be killed. But Lenny and Carl show up, using the technique that Lisa taught them, and they save her. The gang is back together! And they just happened to be right next to the Oregon coast! Success! 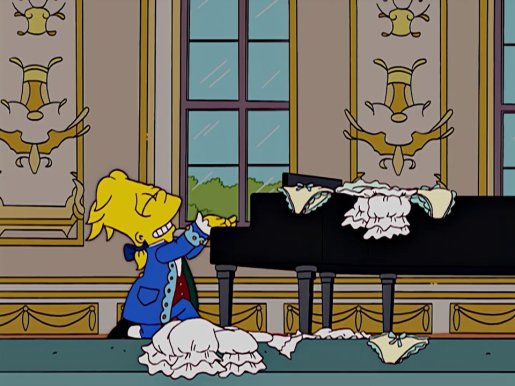 Our final segment of the episode is Bart’s turn. He’s pretty ambivalent to the whole thing, but Marge ends up selling him on the idea of a story about a badass rockstar who lived fast and died young. But then she tricks him and tells him the story of Mozart, where Bart is Mozart and Lisa is Salieri, who is now related to Mozart. We learn about what a show-boat Mozart was, drawing huge crowds while playing the piano with his teeth. And despite how much everyone else loves him, Lisa can’t stand the attention that he’s getting. Lisa gets super jealous, which isn’t helped by the fact that Bart keeps acting like a sibling to her, and gets a whole bunch of awards from some sort of award ceremony. So Lisa decides to spite Bart, and destroy his career at the premier of his new opera. She knows that everyone worships the opinion of Emperor Burns, and she decides to drug Burns’ wine, causing him to fall asleep so everyone thinks he didn’t like it. Her plan goes off swimmingly, and the people quickly turn on Bart’s career after Burns falls asleep during his fart opera. His life then spirals out of control, quickly becoming a drunken wreck before being brought to Dr. Nick and covered in leeches. Lisa then becomes guilty for having killed her brother, and they have a sweet moment where they forgive each other before Bart dies. Everyone is crushed, and Lisa decides to make her mark by writing a requiem for Mozart. Which is ruined by the fact that Emperor Burns cares more about his new disciple, Beethoven, played by Nelson. Lisa then goes crazy, and the story ends, despite the fact that Lisa mentions that this wasn’t the real Mozart story, and was just the movie Amadeus. But Homer shows up and blows this complain off, because Amadeus had that guy from Animal House, which is a great excuse to talk about Animal House and give the episode a goofy ending where we see how everyone ended up.

This is a fun episode. I usually really like ones like this that have the three little vignettes, and this is a pretty great addition to that sub-genre. First and foremost there’s the fact that there’s an actual reason for the stories to be happening, which you all may know is an insane sticking point I have that I just won’t shut up about. But it really is something I love! Having Marge have to barely remember the stories behind these historical figures was a great idea, and it led to some fun little stories. I really enjoyed their explanation of Henry the VIII’s marital woes, especially the little montage of brides he gets rid of. The Sacagawea story was a lot of fun, mainly because Lenny and Carl are the best, and I really enjoyed seeing them take center stage for a change. And the Mozart story is a whole lot of fun, despite the fact that it’s probably the last accurate to real life, but it was pretty damn fun. It was just an all around fun episode that I really dug, and those seem to be far and few between anymore, so let’s just appreciate it for what it is.

Take Away: Don’t fixate on having male heirs, don’t shoo away your helpful American Indian guides, and don’t live fast and die young.