Hey there folks, welcome back to Lifetime of Simpsons. And you know what we have here? One of the rarest types of episodes from the last few seasons I’ve discussed. A Marge episode where she’s isn’t a sanctimonious grouch trying to nag people to death. They actually make her the enjoyable character she used to be! What a concept!

Our episode begins with Homer ordering an unconscionable amount of breakfast food from Krusty Burger, and then finding a way to drive while gorging himself on his feast. He basically ends up leaning his seat back as far as it can go, to the point that he can’t even see the windshield. Which becomes a problem when he approaches the Nuclear Plant and basically just smashes through the gate, blasting into the Plant and busting through a wall, just in time to crush some sort of safety regulation officer. This is obviously a bad thing, so Homer is then fired from the Plant, and thrown off the premises.

But that’s not really what this episode is about, so let’s ignore that for now and cut over to Marge and the kids, who are visiting a giant bookstore. We’re then treated to all sorts of cutting jabs at mega-bookstores like Barns and Noble and Borders that just feels silly in 2016. Times sure have changed! But while the kids run off to entertain themselves in the store, Marge wanders around until she finds a book reading in progress.

The author visiting is a writer of bodice-ripper romance novels, and she’s reading a passage of her latest to a group of women, and Willie. And once the reading is over a q and a begins, and Marge decides to ask a question. Basically she just asks how much training the woman needed to become a successful author, and when the author tells Marge that she has basically none, Marge decides that she could become a writer herself, and suddenly has a new passion. 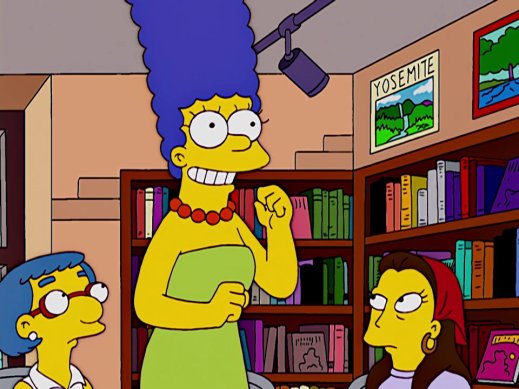 Meanwhile, Homer is wandering around Springfield, trying to figure out how he’s going to tell Marge and the kids that he’s been fired, and what he’s going to do about it. And while scheming ways to make money he accidentally gets a job as a used-car salesman, mainly because he’s a sketchy con-man. Unfortunately those skills didn’t move over to Homer’s new job, because he’s pretty terrible at it, mainly just creeping out people and ensuring that they leave without buying a car. But while hanging out on the lot he finds an old ambulance for sale that no one wants, and obviously decides he needs to buy it.

So Homer shows up at Homer, proudly announcing that he’s quit his job at the dealership and has become an ambulance driver. Marge has a lot of questions about that statement, but that gets brushed aside, because Homer already has a shift that night to drive the ambulance. Marge decides to stand her ground though, and tells Homer to bring the kids along so that she could have the house to herself and begin writing her novel.

Homer and the kids head out to deal with the injured people of Springfield, while Marge starts to think up a plot for a novel. This seems like a terrible way to go about it, but whatever. She wanders the house, thinking of something to write about, and after looking at that picture of a sailboat above the couch decides to write a story set in “whaling times.” So Marge just parks herself in front of a computer, and begins writing a story, with no idea where it’s going to go, and no outline.

But apparently you don’t need a lot of planning to write a trashy romance novel, because Marge starts getting into it pretty quickly. Mainly because she just writes a thinly veiled version of her own family, but on Nantucket. She becomes Temperance, the dutiful wife of Captain Mordecai, a handsome and powerful whaler who looks like Homer.

However, while Marge is writing up this introduction, things that a bit of a left turn. Because Homer comes back from his shift, and he is exceptionally unpleasant. He complains about the kids and demands that Marge stop writing and start making him an elaborate dinner. And because Marge now has an outlet for her frustrations, her book starts to change a bit. Captain Mordecai suddenly isn’t a big manly provider, he’s a drunken lout who is destroying Temperance’s life.

Marge keeps writing her novel in the days to come, and things aren’t looking good for the Homer character. He becomes worse and worse, and Marge decides that the novel needs a new romantic lead. Enter Stanley, a giant muscle-bound hunk that looks like Ned Flanders, and who sweeps Temperance off her feet. The books then becomes a pretty standard romance novel, with tons of smut and adultery, until Marge actually ends up finishing the thing.

She prints the book out, and gives it to Lisa to read over. Lisa’s a little shocked at how trashy it is, and that Marge actually wrote a whole book, but she tells Marge that it’s great, and Marge moves ahead trying to publish it. However, Lisa does mention that Captain Mordecai is pretty obviously Homer, and it’s not very kind to him, so she should probably have Homer read the novel and sign off on it getting published.

Marge thinks that this is a good idea, and gives the book to Homer, hoping against hope that he’ll actually read it. And Homer is surprisingly open to it, taking the book from Marge and sitting down on the hammock to get through it. But almost immediately he gets bored and wanders off, forgetting all about the book. And that night, when Marge asks what he thought of it, he completely lies, says that he read it and loved it, and Marge decides to go ahead and try to get it published.

So Marge gets a hold of that author from earlier, who apparently also has a publishing company, and she gets the book published. It’s just that easy! They even call up Thomas Pynchon and Tom Clancy to get pull-quotes, which is pretty amazing, because as far as I can tell they actually got Thomas Pynchon. And with the quotes established Marge’s book is put into production, and begins sweeping across Springfield, becoming a smash hit. Because if the success of 50 Shades of Gray taught us anything, it’s that suburban moms love them some poorly written smut.

Marge’s book, the Harpooned Heart, ends up becoming a smash hit, getting whole crowds of people to come to a signing she’s doing. Even Dr. Marvin Monroe, who isn’t dead after all! But the crowds of people also begin to pick something up. That the book is clearly telling the story of Marge and Homer’s unhappy marriage. And because Springfield is one of the most gossipy town in the world, that knowledge quickly spreads, and everyone begins commenting on their marriage.

Except there’s one person who doesn’t know this fact. Homer. He still never has read the book, so just seems baffled at all the innuendos that people are making while making fun of him. But he can tell that it has something to do with Marge’s book, so he decides it’s finally time to read it. He grabs an audio book read by the Olson sisters and stars listening to it while driving around in his ambulance. And he is not pleased.

Homer ends up getting home and bursting into the house, distracting Marge while she’s starting writing the sequel to the novel, to announce that he’s super pissed. The two get in a huge argument, since it’s now clear that Homer lied to her when he said that he’d read the book. But Homer doesn’t have any ground to stand on in this argument, so he decides to leave and yell at Flanders, since even he’s figured out that this Stanley character is based on him.

So Homer goes over to Ned’s house, clearly pissed, and Ned decides to flee, since he’s read the novel too. Homer ends up getting in a car chase with Ned, while Marge tries to follow. Bart and Lisa freak out about the whole thing as well, telling the audience that Marge’s book ends with the Homer character killing the Ned character before dying himself. And they think that this will happen in real life.

But that’s not actually what’s afoot, because we see Homer pull Ned over, using his ambulance’s abilities, and then chases Ned toward a giant cliff. Ned is convinced that Homer is going to kill him, but when Homer shows up, he just gets on the ground and begs that Ned teach him how to be a better husband. It was all a huge misunderstanding! So when Marge finally shows up she’s shocked that Homer hasn’t killed Ned, and that he’s trying to be a better man. So the episode ends, with everyone happier, and Marge never to write again.

I enjoyed myself with this episode. It’s really weird, and has Homer and Marge having a stupid fight where Homer’s just being an asshole for no reason, which is one of my least favorite things to happen on the show, but it’s at least pretty fun. Although I will say, the idea of Marge just writing a novel with no prior planning and then getting it published is pretty ridiculous. I’ve wanted to be an author basically my whole life, and not much has come from that. It’s ridiculously hard to come up with a full story, and write it all out. I have a hell of time getting through second-acts personally. And even though I haven’t always been the biggest fan of outlines, there’s no way in hell I could just sit down with no prior ideas and churn something out. But whatever, we don’t need to get into the nitty gritty realism of this episode, and just enjoy the fact that they somehow got Thomas fucking Pynchon to be in this episode.

Take Away: It’s apparently super easy to get a book published, especially if it’s smutty as hell.

“Diatribe of a Mad Housewife” was written by Robin J Stein and directed by Mark Kirkland, 2004. 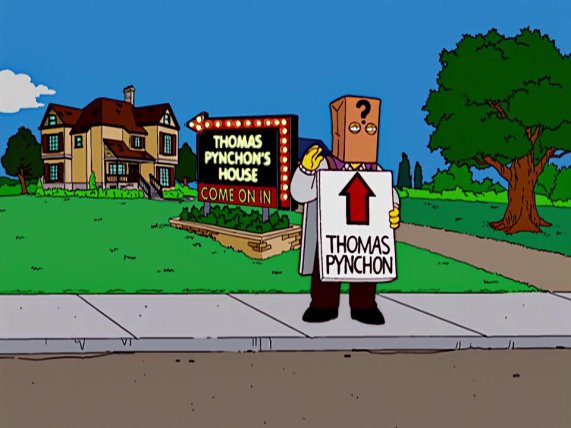 Tagged as: 2004, Diatribe of a Mad Housewife, Lifetime of Simpsons, Season 15, the Simpsons