Hey folks, are you ready for an episode that blends two of my least favorite kinds of episodes? That’s right; it’s simultaneously a vacation episode and a cameo smorgasbord episode. Thanks Season Fifteen! It’s just what I wanted!

The episode begins oddly enough with Mr. Burns and Smithers wandering around and coming across a peanut vendor. Burns decides that he would like some peanuts, but since Smithers refuses to spot him some cash, he needs to go get some money from an ATM. So Burns goes to the machine, types in his ridiculous pin number, and requests a thousand dollar bill to come out. Unfortunately they bill flies out of the ATM, smashes into Burns’ chest, and then flies away.

Apparently flying currency is drawn to Bart and Milhouse in Springfield, because just like that time they caught a twenty, this dollar zips right over to the Simpson’s house, and into Bart’s hand. But this time Bart’s not going to go on a massive sugar binge, and instead shows it to the family to spitball ideas. But he gets a bit of a bummer when Marge tells him that it clearly belongs to someone, and he needs to put up fliers and see if anyone will claim it.

Homer and Bart obviously think that this is bullshit, and try to hang the flier as high up a telephone pole as they could, but the people of Springfield know no bounds to their stupidity, and they cut the pole down to read it. And once the news is out, the whole damn town shows up to try and claim the bill. But no one seems to know anything about the bill, and at the end of the day Marge decides that Bart has done his due diligence, and is allowed to keep it.

Bart’s first idea for the money is obviously to make a moon party, but Lisa does her best to guilt Bart into spending the cash on Marge to take her on a nice vacation. But Marge shoots that idea down, so Bart has to come up with a better idea. And it’s a weird one. He decides to open a museum in his treehouse, mostly full of random crap, that includes an exhibit where people can come and gawk at the bill, complete with its Grover Cleveland portrait.

Unfortunately, while business is booming at the museum, they get a surprising visit. Mr. Burns happens to stop by, and has proof that the bill is his, since when it struck his chest it gave him a bruise with the bill’s serial number. So with irrefutable proof that the bill is his, they give Burns back the thousand dollar. Luckily though, the museum somehow raised three thousand dollar, so they ended up ahead. And, because it’s okay this time, they decide to spend the money on a vacation for Marge.

The family come up with idea for the vacation, but are quickly shouted down by Grandpa, who wants to go to England. Turns out he was temporarily stationed there in the War, and wants to track down some woman that he had a romance with. The family can’t come up with any other ideas, and they decide to head out to England.

And that’s when the cameo’s start rolling in, because as soon as they get off the plane in London they’re met by Tony Blair, who introduces them to his country before strapping on a jetpack like James Bond and zipping away to great some other family. And after meeting the Prime Minister they drop Grandpa off at their hotel and hit the streets of London, looking to sight-see and find as many random British celebrities as they can.

They run into JK Rowling at a bookstore and talk about Harry Potter for a moment, go to a Judy Dench’s fish and chips fastfood restaurant, run into Ian McKellen getting ready to perform MacBeth and learn about the superstitious nature of the theater, and the kids get all blitzed on British sugar, running around London in a hyper haze. 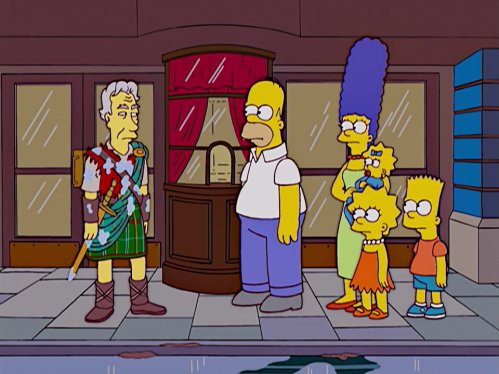 But at this point the episode needed some conflict, so they Simpsons obviously rent a car and begin driving around, which is a terrible choice. Driving in foreign countries seems terrifying to me, especially ones that drive on the opposite side of the road than us. Plus, since its London, Homer almost immediately gets caught in a massive round-about, and gets trapped for hours. He finally snaps though, and smashes out of the round-about, jumping right through a fence and crashing into a fancy carriage.

And it’s not just any carriage, it belongs to the Queen of England. Yep, Homer Simpson has just rear-ended the Queen of England. And people are not happy. He gets whaled on by guards before being dragged to a court, becoming a massive media story. The trial is a bit of a shit-show, mainly because they let Homer act as his own barrister, and things don’t go well for him. Especially when the Queen stands up to provide testimony, and convinces the court to punish Homer as severely as possible.

This obviously takes the form of sticking Homer in the Tower of London until he dies, becoming a bit of a tourist attraction. But the family can’t abide Homer’s imprisonment, so they find some old manuscript that details a secret passage in his cell. They sneak in at night, and Homer begins climbing through a secret passage, which unfortunately doesn’t lead outside, instead it leads to the Queen’s bedchamber.

The Queen is not a fan of this outcome, but before more guards show up to beat Homer to death, he decides to try and talk the Queen down. He gives an impassioned speech about how America is England’s ungrateful child, and the he’s sorry, and this somehow convinces the Queen to let him go. So the Simpsons return to America. Oh, and right as they’re about to get on the plane that lady Grandpa was looking for shows up, with a woman who looks exactly like Homer and is obviously his daughter. So Grandpa obviously peaces out, and the family flee back to Springfield, never to speak of this again.

Yeah, this episode doesn’t do much for me. It seems a tad less problematic than the episodes where they went to Japan and Africa, since there’s not as much blatant stereotypes, but I just generally don’t like the vacation episodes. Plus, it’s one of the least inspired cameo-filled episodes. Cameos basically just walk up to the Simpsons, say a sentence or two to them, and then walk away. They didn’t even come up with clever reasons for the Simpsons to speak to the celebrities. It’s just odd. Plus, it seems weird that the family want to spend Bart’s money on a vacation, then don’t, then lose the money, then make the money back, and then go on vacation. That all seemed needless. It padded out the run-time, but I’m not sure why any of that needed to happen. It’s just a dull episode, and it’s a serious bummer that it was the last episode John Swartzwelder wrote, since it really doesn’t seem up his alley and more like he phoned it in. Oh well, they can’t all be winners.

Take Away: It’s incredibly easy to meet celebrities in England. And assault the Queen.

“The Regina Monologues” was written by John Swartzwelder and directed by Mark Kirkland, 2003.

Tagged as: 2003, Lifetime of Simpsons, Season 15, The Regina Monologues, the Simpsons