Welcome back to Bat Signal, my ongoing experiment to read random issues of Detective Comics regardless of what came before or after it. And we sure do have a complicated issue today. A few weeks ago I happened to pull the issue right after Bane broke Batman’s back, and we were given an issue that taken out of context was utterly baffling, since it was smack-dab in the middle of a massive storyline. But that issue doesn’t have any thing this week’s issue, because if you thought Knightfall was an intricate storyline, you haven’t heard of No Man’s Land. I’ve mentioned No Man’s Land before on the site, but we’ve only had an issue that was a fall-out of that event, not one that took place in the actual event. Which is kind of shocking since it ran for 11 issues just in Detective Comics. The whole damn story spanned 14 different series and dozens of issues of comics and revolved around Gotham dealing with a massive earthquake that left the city in shambles, cut-off from the outside world. It was basically a post-apocalyptic Batman story, with various villains and heroes forming gangs and controlling the city in violent turf-wars. It’s an incredibly dense and complicated story that really has to be read beginning to end to fully comprehend everything that’s going on, but that’s not really how this project works, so let’s just dive on into a random issue!

Now, this issue is a part-two, so it’s going to be even more confusing than it would normally be just jumping into an event, and it sure starts off in an odd place. With Two-Face holding a machine gun up to Commissioner Gordon’s head in a destroyed courthouse. At this point in No Man’s Land Two-Face had kidnapped Gordon for some slights that Gordon has put across him, and is getting ready to hold a trial for Gordon, with himself as judge, jury, and executioner, and the kidnapped Renee Montoya as the bailiff. The issue starts straight off with everyone at each other’s throats, and Two-Face announcing that his goal is to prove that Gordon was guilty of violating the terms of an agreement the two men made to survive in No Man’s Land.

We then briefly cut away to some other plot that I really have no idea what’s going on. Batman and Robin are watching Harvey Bullock and the police deal with some hostage scenario with some dude who seems to be wearing one of those crazy plague-doctor masks from the Renaissance. But that doesn’t really have anything to do with the rest of the issue, so we just cut back to the courtroom where Two-Face is really starting to irritate everyone involved. He insists on keeping with courtroom decorum, and is prosecuting Gordon like a real attorney, despite the fact that he himself is also the judge. But when you’re held captive by an insane former lawyer with a machine gun, I guess you just have to play along.

First up he puts Renee on the witness stand and stars to interrogate her, trying to prove that Gordon did shady things. And through the interrogation we start to get some back story. Apparently Gordon and his gang were doing poorly in No Man’s Land, and he wanted an alliance with a more powerful and successful gang. He decided to choose Two-Face’s gang, and picked Montoya to infiltrate the gang and try to negotiate the alliance, knowing that Harvey had a bit of an obsession with Montoya from before the earthquake. He gets Gordon to agree that he sent Montoya on a dangerous mission, and used her respect for him to get her to do something against her best interests. He then starts to get really creepy with Montoya by kissing her on the forehead while talking about how he’s kept her captive for five months.

Yuck. Anyway, Two-Face continues to yell at Gordon, saying that Gordon was selfish, and had a responsibility to protect Montoya and every other citizen in Gotham, and instead was thinking about himself and his own power. And after making some closing statements about how terrible Gordon is, Two-Face decides that he’s won the case, and prepares to execute Gordon as punishment for the slights that he more or less imagined. But before killing Gordon, Montoya declares that things are unfair, since Gordon didn’t get a defense. Two-Face laughs at her, and explains that there aren’t any other lawyers around, and since he won’t let Gordon defend himself, there’s no point in pretending.

But Gordon does have an idea about who can defend him. Harvey Dent. He suggests this, and Two-Face is a little taken aback, but decides to give it a coin-flip. And when it comes up good-side, he decides to give it a shot, and begins a defense of James Gordon, against prosecutor Two-Face, to judge Two-Face. Things get complicated.  Especially when Harvey Dent calls Two-Face as his only witness, and begins to cross-examine himself. Which turns out to be a bad call, because it quickly becomes apparent that Harvey Dent is a better lawyer than Two-Face, and he’s able to get Two-Face to confess  that he blackmailed Gordon and that their alliance is null and void, thus ending the case in favor of Gordon. He acquits Gordon, and lets him go, while keeping Renee prisoner. Although she kind of stays because she feels bad for Harvey. The issue then ends with Gordon returning home and having some strong words with Batman who is waiting for him, but that just feels superfluous after watching a villain destroy himself. 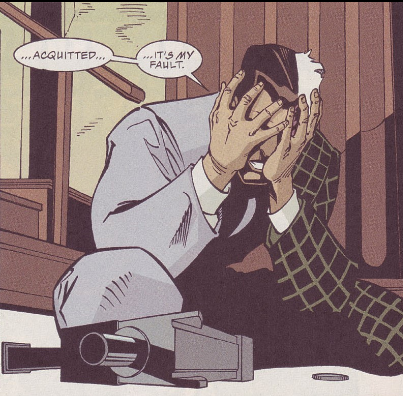 So yeah, this is an odd issue. It’s another one that Batman barely shows up in, instead focusing on some side-characters, and it’s also a tad baffling when taken out of context like I have here. That’s obviously not the issues fault, since it’s a part in a larger story, but if this happened to be the first issue of Batman you’d ever picked up you’d be a little confused. But taking that all out, it’s a pretty great issue. I love Two-Face, and find him a fascinating and compelling villain, and his potential is pretty well on display in this story. The idea that Two-Face is always at war with his two identities is really brought to life in this story, showing Harvey and Two-Face arguing about the harsh reality of their twisted life. The larger No Man’s Land story is a great one, and I really love the bizarre world that it created, but this little slice-of-life holds up just fine. Seeing Two-Face argue with himself someone managed to create a wonderful amount of drama and pathos, and became one of the most enjoyable issues I’ve tackled on this project.