This is a pretty weird week here on Lifetime of Simpsons. Just a series of episodes that end Season Fourteen on a pretty odd and disjointed note. But of them all, this one is probably the strongest. Because who doesn’t want to see two youth organization waging bitter war against each other?

We start off with Bart and Milhouse sitting around watching South Park, which I don’t really think was even that topical of a reference at the time. Oh, and it’s also just really weird, and basically calling South Park a stupid waste of time, which while I’ve never been a huge South Park fan, it seems pretty misguided. But it does give Bart and Milhouse some cartoon violence, which I guess is all you want when you’re ten years old.

Marge shoots that down though and makes them watch some terrible Christian show about angels, which seemed like a spot-on parody of crap like that. But the angel show isn’t keeping the boys’ attention, so they head outside to find something to do. And they obviously decide that the only thing to occupy themselves with is to tie a string onto a fly and let it buzz around. However, things fall apart when the fly gets away from them, and buzzes into Ned’s house through an open window.

Bart and Milhouse hop into the house to catch the fly, and find that it’s immediately been eaten by a cat. But their disappointment is quickly overshadowed with the sudden realization that they’ve just broken into a neighbor’s house, and decide to wreck it. The trash Ned’s house, really for the hell of it, until they finally break into a secret room in Ned’s house. And, much like the time they found Comic Book Guy’s secret room, this room reveals a secret obsession of Ned’s

Turns out Ned is obsessed with the Beatles, and has a special basement full of Beatles memorabilia. So the horrible children decide to mess with the stuff, even drinking some ancient soda that makes Bart hallucinate the various stages of John Lennon’s career. And disaster strikes when Ned and the kids come home, and run into their panic room after seeing the house in such bad shape. So the police show up and find Bart and Milhouse, busting the kids and calling their parents.

Homer and Marge then come over, and barely seem to care that Bart did such a horrible thing. Neither does Ned, who just tells Marge that she should ensure Bart gets more supervision. Marge agrees with this assertion, and decided to make Bart join some youth organization, and spend more time away from Milhouse. So they look through the different organization in Springfield, and settle on the Pre-Teen Braves, a group that apes the customs and lifestyle of the American Indians.

Homer decides to join the Braves as well, and becomes their “tribal chief,” to take care of Bart, Database, Ralph, and Nelson. However, it becomes clear that Homer has no interest in taking care of the boys, and just makes them watch football instead. But Marge and Lisa decide that this is a waste of a good organization, and decide to take over, actually teaching the boys about smoke signals. They then decide a coup is in order, and make Marge their new tribal chief, ousting Homer. Who really doesn’t care.

And under Marge’s rule the kids are actually learning and doing things. They even go on a nature walk with a real American Indian, who shows them how horribly polluted the land that his people once lived on. The boys then decide to clean up the area that they were shown, and after grabbing Dave Shutton to accompany them and write a story, they head to the field, only to find it’s already been cleaned. And it’s been cleaned by a rival youth organization, the Cavalry Kids, who dress like Union cavalry soldiers, and are led by Kirk Van Houten, and include Milhouse, Jimbo, Martin, and some random Asian boy.

The two groups then quickly decide that they are each other’s nemesis, and engage in a bitter war to better serve their communities. They begin warring, trying to one-up each other in every activity that they do, like competing to entertain old folks with a variety of escalating tricks, passing out either soup or booze to homeless people, and building habitats for humanity or burning them down.

But things really come together when Drederick Tatum announces that he’s holding some competition for the youth organization of Springfield where whichever one sells the most chocolate for charity, they’ll get to be praised at a baseball game. So the two groups begin slinging their chocolate all over town, starting a war. And desperate times call for desperate measures, so the kids decide to let Homer become their war-time chief. And he has some ideas to destroy the Cavalry Kids.

And that idea? Poison their chocolate with laxatives. They sneak into Luanne’s garage and taint all of the chocolate, leading to a rash of diarrhea when Cavalry Kid’s sell their candy. However, at the end of the contest there’s a surprising result. The Cavalry Kids have won in a landslide, mainly because the old folks from the Retirement Castle have bought up all the laxative chocolate so they can actually crap for once.

So the Cavalry Kids have won, and get to be honored at an Isotopes game. But the Braves don’t plan on being gracious in defeat, and come up with a plan to get the Cavalry Kids lost in a fake VIP parking lot, and pretending to be them. Bart even has a Milhouse costume he puts on. And when they get on the pitcher’s mound to sing the National Anthem, they decide to make a mockery of it, and get the Cavalry Kids in trouble. But right as the crowd is about to tear them apart, the real Cavalry Kids show up and start fighting the Braves, eventually spiraling out into a massive riot in the whole stadium. But when Marge is caught on the Jumbotron crying, everyone decides to stop fighting and get along, while singing the Canadian National Anthem, since it’s not a song of war. 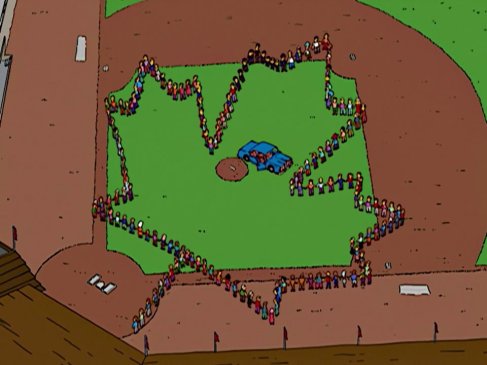 This is a really dumb episode, but I did have a good time with it. I would have imagined that after seeing Bart and Milhouse doing something so terrible at the top of the episode would spoil the rest for me, but it went into an interesting place. We’ve already seen Bart join the Junior Campers and get into it, so this doesn’t really have that unique of a premise, but I like the idea of two rival children organizations going to war with each other. They didn’t really use the “Cowboys vs Indians” schtick that you would think they would, but the battle they get into is still fun. Plus, things get absolutely insane by the end. The whole stadium erupts into violence at the drop of a hat, just like a typical Springfield event, but then they all make amends and sing the Canadian National Anthem. And hey, look how accidentally topical it is to see people freak the holy shit out when someone is “disrespecting” some weird song that we all think we need to sing to be patriotic.

Take Away: Don’t let your children destroy a neighbor’s house, and if you do, maybe actually punish them? Oh, and don’t bother about getting too invested in the National Anthem, it’s just a goddamn song.

“The Bart of War” was written by Marc Willmore and directed by Michael Polcino, 2003.