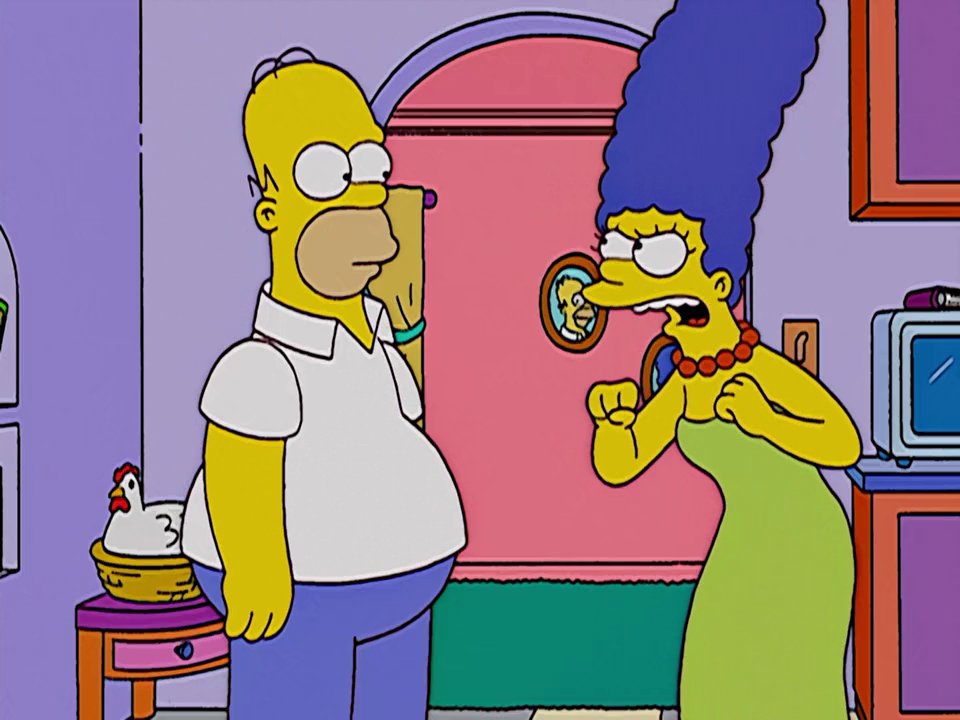 Hmmm. Well look what we have here. A baffling little episode that I really cannot figure out. It’s like a Frankenstein of plot elements that were mashed into a weird little mess. Let’s do an autopsy!

We start off with a class field trip to the aquarium. I guess it’s a fourth grade trip, since Mrs. Krabappel is there and most of the kids are fourth graders, but Lisa is there for some reason too. Oh, and Marge is the chaperone, taking care of Skinner who is getting picked on. We then get some sight-gags as they wander around the aquarium, learning about oil spills and stumbling upon some penguins who are fully capable of flight.

But when they get to a large tank with a giant clam in it, the entire group gathers around to look at the two flawless pearls inside. Until it turns out that the pears are Bart’s butt-cheeks, and he’s somehow gotten scuba equipment and gotten into this tank just to prank his class. And as vengeance for entering their domain, so sea-life come up and start beating up Bart under the water, causing him to be rushed to the hospital when they fish him out.

It doesn’t seem like Bart really needed a lot of medical attention, but since Marge forgot her insurance card he gets handcuffed to a radiator so he can’t escape without paying. Marge tries calling Homer to come give them the card, but he seems to be incommunicado and they just have to wait for him to show up. Which takes all damn day since Homer was apparently spending the day in a video store watching the demo movies over and over. Marge freaks out about his unreliability, and tells him that he needs to finally get a cell phone.

And Homer really likes having a phone. He quickly gets used to it, calling everyone while driving, until Barney recommends he get a hands-free headset to make things mildly less dangerous. So Homer heads to a store to buy a Bluetooth headset, and ends up getting pressured by a salesmen to buy a whole car’s worth of random appliances that plug into his cigarette lighter (ha, remember when cars had those?). But disaster strikes when he’s busy cooking hush-puppies in his car, and he drives off a pier.

Homer’s then brought to court, and his license is revoked, since he clearly has problems with driving. And since Homer’s unable to drive and his kids are too young to, that means Marge is now the family’s chauffeur. Which turns out to be pretty terrible. Homer basically makes her mother him, driving him around to play with Lenny and Carl and get ice cream, and he quickly starts taking advantage of her hospitality.

But, after enough harassment, Marge decides she’s had enough and has Homer walk to Moe’s instead of drive him. And after a shocking amount of complaining, Homer makes it to Moe’s and decides that walking is his new alcohol, and he becomes absolutely obsessed with walking. He gets a walking suit and starts wearing a track-suit, and just walks everywhere, feeling superior to everyone he meets, becoming pretty insufferable.

And even though Homer’s now walking everywhere, Marge still has a whole lot of driving to do, and is slowly losing her mind. She becomes jealous of Homer and his ability to just stroll around town whenever he wants while she’s stuck dealing with carting everyone all around town and fighting off Peruvian fighting frogs. And this comes to a head when she’s driving around and just so happens to ram her damn car into Homer while he’s capering about town, singing a ridiculous song with Steve Buscemi about how awesome walking is.

So, for the second time this episode, we have a member of the Simpsons wounded, with Homer in bed being told that he’s going to have to recuperate for a while. Oh, and as a kicker Marge is told that she now has to weight on him hand and foot, which is probably going to go great since she was so jealous of him being an ass that she hit him with the car. And this almost immediately makes itself clear when Marge just keeps accidently hurting Homer, seemingly against her knowledge.

And this random abuse just keep on happening until Marge suddenly has a huge meltdown when Homer’s bragging about how his hips are stronger than ever after the accident, and she says that she hates him. That’s obviously pretty extreme, so the two decide to go see a marriage councilor to fix their issues. Which is clearly going to be no easy feat, since it becomes evident that Homer is extremely narcissistic, and considers himself the most important person in his life so much that he doesn’t even put Marge on a list.

Marge storms out of the counselor, and Homer asks for a quick way to save his marriage. The therapist says that Homer should give Marge a romantic dinner, and he decides that that will fix everything. However, while he’s planning his intimate dinner at Moe’s, the rest of the barflies start chatting with him and say that they want to help plan the party.

Homer agrees, and things quickly spiral out of control until the whole damn town is involved, and they throw a massive banquet in honor of Marge. Everyone brings food, and they create a giant party in the back yard of the house, and when Marge shows up they all cheer and start loving on her. They even brought Jackson Browne in to sing a parody song for everyone. And for some reason, despite the fact that this intimate dinner got blown out of proportion into a massive party, Marge forgives Homer and everything is magically fixed. 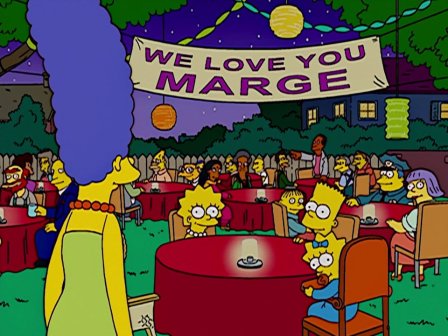 I’ve complained on here before that some of the episodes kind of feel like hodgepodges to me. Like the writers had two ideas that they just couldn’t crack, and stuck them together despite them not really gelling that well. And I don’t think any episode quite exemplifies that idea like this one. What the hell is going on with this episode. There’s like five different plots that barely connect, and none of them are that interesting. We have Bart pranking his friends and getting no repercussions, Homer becoming addicted to cell phones, Marge driving everyone, Homer getting into walking, and then some marital strife. I guess they sort of managed to make all these disparate ideas work together in a way, but it barely does. I can’t really tell what the point of this episode is. It doesn’t become a “Homer and Marge’s relationship is in trouble” until the last act, at which point it just all escalation before a random remedy. It’s just rushed and awkward, and leads to an utterly forgettable and mediocre episode.

Take Away: Don’t put too many gadgets into your car, because it will eventually and baffling lead to the end of your marriage.

“Brake My Wife, Please” was written by Tim Long and directed by Pete Michels, 2003.

Tagged as: 2003, Brake My Wife Please, Lifetime of Simpsons, the Simpsons