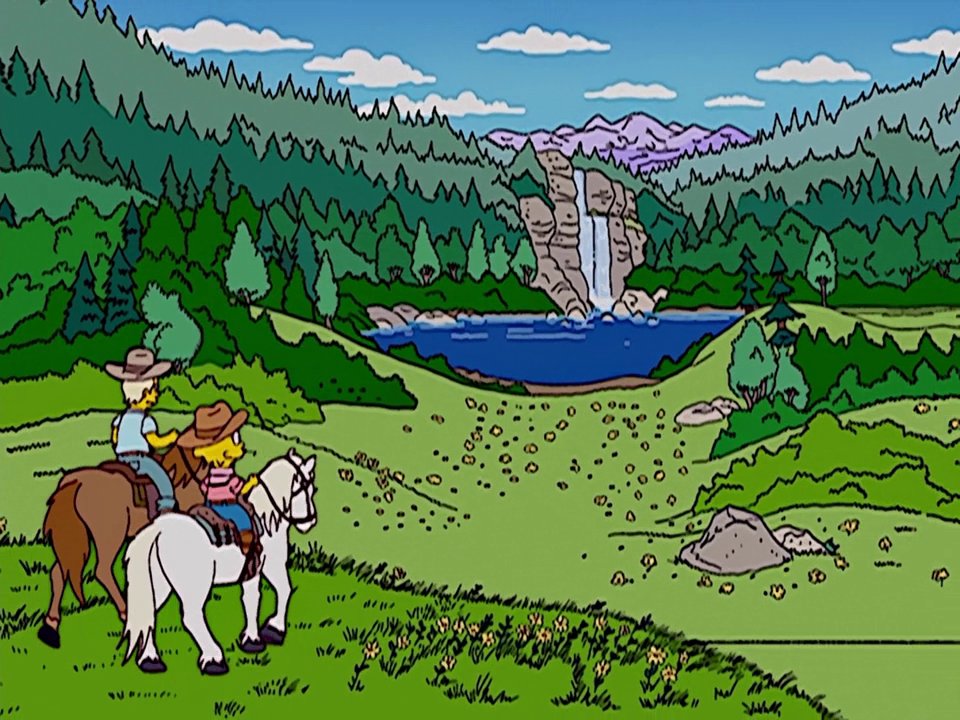 You know, this hasn’t been all that great of a week here on Lifetime of Simpsons. The show is in a rough place, and things have been a little bleak. But you know what? Let’s all just end the week and enjoy this silly and weird little episode about a dude ranch. It’s not a perfect episode, but when grading on the curve we have now, it’s pretty fun.

Our episode begins with the Simpsons wandering Springfield at Christmastime, singing carols to the people of the town. They sing to Snake as he’s robbing a house, they sing to Mr. Burns before he releases the hounds on them, they sing to Krusty while making up some Jewish carols, and finally end up at the Blue-Haired Lawyer’s house. But while they’re talking to the lawyer, he tells them that all the carols they’re singing are technically copy written and they have to sing ones from the public domain.

Homer thinks that this is bullshit, and like countless terrible teenagers on Twitter before him, he decides to rail against IP law. But after that’s done he decides that he should just write his own Christmas carol, and not have to deal with intellectual property laws. So he beings writing a song, and things are quickly ground to a halt when Ned shows up, wanting to help write a new Christmas song. Homer tries to play nice with Ned, but quickly freaks out and kicks Ned out, furious at him.

But while fuming about Ned, Homer starts playing around with the piano, and ends up writing a song. Not a Christmas carol though, a brutal slam on Ned Flanders. He fine tunes the bitter song, and even starts playing it at Moe’s, when sometime insane happens. David Byrne ends up walking by Moe’s, and comes in to tell Homer that he loves the song. He tells Homer that he’ll produce, duet, and release a single of the anti-Flanders song, and Homer obviously agrees.

So Homer hits the studio with David Byrne and the two end up hammering out this mean song, and the world loses their minds about it. The town goes nuts and everyone starts obsessing over this weird little novelty song, even Ned and his kids. But, what starts out as a gift for Homer quickly turns bad, because the song becomes played incessantly. It’s on all the time on the radio, and everyone is trying to record their own covers and alternate versions. It’s inescapable, and it’s driving the Simpsons insane.

The family decide that the only thing they can do to escape the stupid song is to go on vacation, so they look through a kiosk of fun things to do and decide to go to a dude ranch and escape. So they pack up and head out to the Lazy Eye Ranch, which is owned by the Rich Texan, and make themselves at home on the ranch.

Well, Lisa isn’t that at home. The whole ranch is based around historical crimes to the American Indians, and what she views as animal abuse, so she turns into a sullen teenager. That is until a handsome older boy named Luke shows up, and asks her to go hang out with him, riding horses, and posting signs against hunting and that Tibet should be free. So that’s clearly up her ally, and she suddenly loves the trip.

The rest of the family are having a good time too, learning to ride horses and hang out with some weird old prospector named Cookie that they quickly befriend. And while the rest of the family are out having lunch with Cookie, the insane B-Plot is established. They run into some American Indians, whose homes have been deposed by a group of evil beavers, who have rerouted the course of a river. The Indians are unable to fight the beavers, so in exchange for turning their land into a casino, Homer and Bart agree to wage war with the beavers.

And while Homer and Bart begin drafting battle plans against the beavers, Lisa is having a great time with Luke. The pair ride horses all around the area, enjoying the natural beauty of the country, and stay up late in the night playing music together. Marge gets a little worried that Lisa is moving too fast with the boy, but she’s too smitten to care. However, things take a turn when Lisa learns that there’s a big square-dance coming up, and when she goes to talk to Luke about going she overhears him seemingly talking to his girlfriend over the phone. 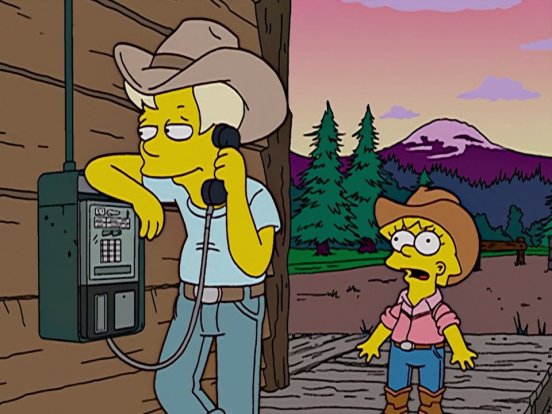 Lisa is crushed about this, and rides her horse out of the ranch to mope. And while she’s out there she runs into a girl named Clara, which was the name she heard Luke use. So, in a diabolical move, Lisa gives Clara some wrong directions, and points the girl out into the middle of the woods, instead of to the ranch, hoping that that won’t come back to bite her in the ass.

Oh, and while all of this is going on, Homer and Bart have officially declared war on the beavers. After a couple failed plans they come up with a massive strike against the dam, which involves them laying hotel furniture in the woods to lure the beavers. And once they go to eat the wooden mini-bar Homer and Bart storm into the dam and destroy the dam once and for all, freeing the Indian village from the lake the beavers has created, and solving everything.

Back at the dance, Lisa is fawning over Luke, trying to be a shoulder for him to cry on when he realizes his girlfriend has stood him up. But there’s a slight hitch. Clara wasn’t his girlfriend, she was his sister. So Lisa gets insanely guilty and convinces Bart to go out with her and find Clara. They wander around the woods for a while, and end up finding her trapped on a rock in the middle of the new river the beavers made.

Bart uses the beavers hatred for him to cut down a tree that they use to save Clara with, and bring her back to the ranch. The next day the Simpsons are ready to leave the ranch, and Luke acts like a total (but justified) asshole to Lisa about what she did to his sister, and they leave with her depressed. Well, until they start driving and see that now Moe has a one-hit wonder song, and they decide that they still don’t want to go back to Springfield, and go back to the ranch, presumably to have an awkward week with Lisa and Luke.

Listen, this isn’t a great episode, but I had a pretty good time with it. The whole beginning with Homer writing the mean song that everyone loves is weird, but funny, and the dude ranch stuff was pretty good. I’m surprised that the Simpsons haven’t been to a ranch before yet, and it was a good setting for some reason fun. I like the idea of Lisa finding a boy that she has so much in common with, and I thought they handled her jealousy and eventual betrayal pretty well. I also think that the last interaction with Luke was pretty good. Yeah, it’s depressing, but Lisa did a super shitty thing to him. Anything other than that would have felt ridiculous, so even though it’s harsh seeing Lisa cry at her heart breaking, it was more realistic, and seemed to actually teach her something. Oh, and it’s hilarious to see Homer and Bart wage war on beaver, that’s just insane and I love it.

Take Away: Young love is hard, but trying to murder your crush’s sibling is probably not the best way to get them to love you.

“Dude, Where’s My Ranch?” was written by Ian Maxtone-Graham and directed by Chris Clements, 2003.