You know what kind of episode we haven’t had in a while? One where Lisa rails against the establishment and somehow manages to make massive changes in Springfield despite being some random eight-year old. And look what we have here? One of those!

The episode starts off with the children of Springfield Elementary sitting in the auditorium to listen to Principal Skinner ramble at them about not using school computers to look at and/or create website devoted to hating him. And once that bit of housekeeping is out of the way, he introduces a documentary filmmaker named Declan Desmond who is at the school to film some sort of Seven Up style ethnography on students.

And after showing us previous examples of his work, like revealing how disgusting Krusty Burger is, he explains the idea of this new documentary, and that he’ll just be filming all of the children going through their days. So he begins wandering the school, observing the children like they’re animals. He looks at Bart trying to be an alpha male before being picked on by the bullies, Ralph and Milhouse being sad hall monitors, and Lisa trying to pretend that the school is better than it actually is.

While talking with Desmond though she accidentally reveals that the fake reading nook that she’s meeting him in isn’t real, and exposes the whole thing. But she saves it by telling Desmond that she’s the best student in the school, which he scoffs at. The two talk and he ends up mocking the fact that she doesn’t have any particular focus, and is just trying to be good at everything, telling her that she needs to find a specific passion otherwise she’ll become nothing.

And if there’s one thing we know about Lisa, it’s that she’s terrified of being nothing. So she freaks out and talks to her parents about this new fear that her life isn’t on the right path. But before she goes and tries to fix that issue, we see that Bart has initiated a weird B-Plot where he’s trying to win back the respect of the bullies after being picked on in Desmond’s film. And apparently the only way to do that this week is to steal cool hood ornaments from cars, which is what the bullies are doing now.

But enough about Bart for now, let’s get back to Lisa and her quest to find a passion. She begins wandering the town to find a path, and ends up at the museum. Initially she thinks about paleontology, but just sees a sad man brushing the bones of dead monsters, and ignores then. Next up she thinks about geology, but gets too bored just reading about it. So she’s about to give up until she walks into a planetarium and realizes how cool astronomy is. And that’s all it takes!

So with astronomy as her new passion Lisa and Homer head to a craft store and buy her a fancy telescope and a book on planets written by Ed McMahon. She then sets up the telescope in the living room and gets ready to look at the planets. Well, she would except for all the light that Springfield gives off at night. No matter where she looks, the stars and planets are obscured by light pollution, even a hill outside town where the observatory is.

And while she’s up on that hill complaining about the light pollution, Professor Frink starts to talk to her about what a bummer it is to astronomers. Although he does have an idea. A petition to reduce light pollution in the town. Lisa thinks that’s a great idea, and heads back to town to try it out. Oh, and while all of that’s going on Bart has still been trying to impress the bullies, mainly by spray painting one of Maggie’s pacifiers silver to pass it off as a hood ornament. It does not work. 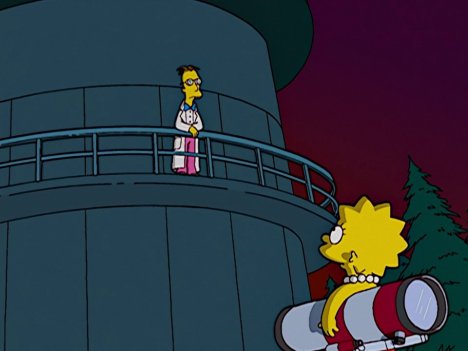 But Lisa’s doing well! She begins canvassing the neighborhood, and even gets people at the Elementary School to sign it, including Desmond who is impressed by her sudden focus. And after a little bit of begging, Lisa gets all of the signatures she needs, and brings the petition to Mayor Quimby, who responds by turning off all of the street lights in town at night, letting people enjoy the stars for the first time ever. Which is good, since there’s a meteor shower coming up that everyone is now excited about.

It’s also great for the children of the town, whose new hood ornament theft fad has gotten so bad that the children take to the streets at night, under cover of dark, and steal everyone’s hood ornaments. So Bart’s still screwed, because now there are none left for him. Well, none except the hood ornament on Fat Tony’s limo, which is probably going to be more trouble than it’s worth, but it’s Bart’s last chance, so he still decides to go for it, and creates an elaborate plot to pretend to be a valet parker at Luigi’s to steal the ornament.

But Bart could have picked a better time, because while he’s getting ready to steal the ornament Lisa is back at City Hall dealing with an angry Mayor Quimby. Turns out people liked the stars at first, but now they’re pissed about all the crime and vandalism, and want him to flip flop. And flip flop he does, so much that he turns all of the lights on full-blast, plunging Springfield into eternal daylight, which is bad news for Bart, who has to flee from Fat Tony when the darkness fails him.

So things are even worse for Lisa now, and they aren’t great for Bart either. So the pair decide to team up and help each other with a wacky scheme. Turns out the people of Springfield are slowly going mad since there’s no more night and they can’t sleep, so they take a sleep-deprived Homer and bring him to the Power Plant to fix things. They use his hand-print to get into the Plant, and overload the system to the point that they blow out every electric light in town.

And while some people are psyched about the sudden reappearance of night, most of the town is furious. And, in true Springfield fashion, they form an angry mob and come to attack the Power Plant and whoever turned their lights off. But right as they’re about to kill Bart and Lisa, they see that meteor shower from earlier, and everyone is too inspired to care anymore. So the towns chills out, everyone appreciates the universe, and Bart gets his damned hood ornament. Oh, and we end with some clips from Desmond’s documentary, which is primarily Milhouse being bad at everything, which is great.

I like this episode a lot. I’m a big sucker for Lisa episodes, and while I prefer episodes that revolve around Lisa and Homer having some ideological issue that they have to work through and compromise with, this type of episode is also great. Lisa is a passionate person, who doesn’t really fit in with Springfield. We know that she’ll do better in the future, but she’s stuck in Springfield for now, and sometimes she decides to try and better her surroundings. And this is a great example of that. She finds some random new passion, this time astronomy, and does everything she can to change the town and make it a better place, even though she does come off as a tad sanctimonious. She knows that people should be appreciating the universe, and this is the only way she can do it. And in the end, she’s right, and it works. It’s not sustainable, but she at least gave the town the gift of the meteor shower, which is hopefully something that they won’t take for granted. Lisa’s going to be alright.

Take Away: Children apparently have a lot of power in local government.

“‘Scuse Me While I Miss the Sky” was written by Dan Greaney and Allen Grazier and directed by Steven Dean Moore, 2003. 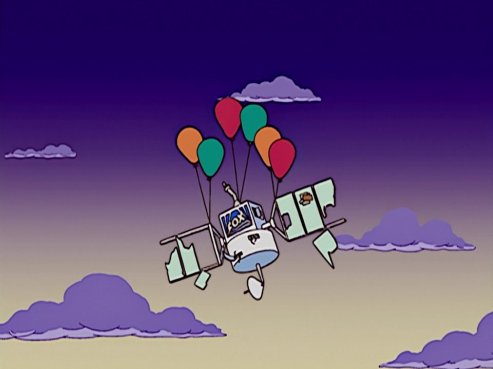 Tagged as: 2003, Lifetime of Simpsons, Scuse Me While I Miss the Sy, Season 14, the Simpsons