It’s been an interesting week here on Lifetime of Simpsons. We’ve passed 300 episodes, we’ve had high, and we’ve had lows. So let’s end the week with some good old-fashioned romance!

The episode begins with Bart and Lisa being super excited to go to the beach, while Marge seems miserable. She’s apparently been up all night mending Homer’s swim-suit, and just kind of seems like a zombie. But she manages to get everyone ready, they pile into the car and head down to the beach with the rest of the town. Apparently Springfield has some annual celebration where a bunch of horrible jellyfish migrate back to their beach, so everyone’s there to watch the gross things arrive.

This is apparently a huge deal in Springfield, and after looking at the jellyfish arrive, they just keep hanging out on the beach and end up having a huge party with dancing and romance at the Squidport. Everyone seems happy and in love. Well, everyone except Ned, who still hasn’t moved on since Maude’s death. He just kind of awkwardly stands there, talking to Captain McCallister until he decides that this whole event is meant for lovers, and chooses to leave and go back to the mall to work at the Leftorium while everyone else is having a good time.

So Ned opens up his store and start working on his taxes, when he unexpectedly gets a customer. It’s a woman who seems to be in a disguise, and who is visiting Springfield from Los Angeles. The two strike up a conversation, and they actually end up flirting a bit. She seems very amused by the fact that Ned doesn’t seem to know who she is, and asks him out to dinner since she’s going to be in town for a while, and doesn’t know anyone. 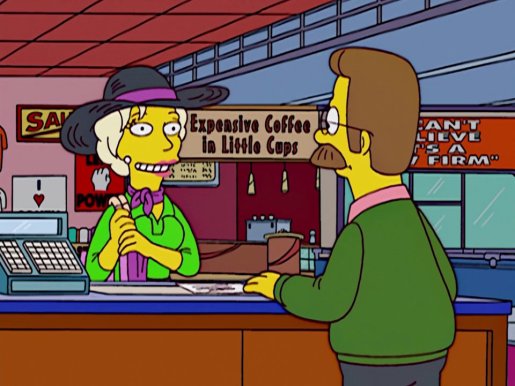 Ned agrees and they make a date for the following night. And as soon as she leaves Ned begins dancing around and singing, and heads home. But as he leaves his store, he passes by the movie theater in the mall, and sees a movie poster which features the woman he just met. That’s right, Ned just met an actress named Sara Sloane who is apparently a huge deal. So Ned does what he always does, and runs home to talk to Homer about dating a movie star. And even though he doesn’t have good advice, Ned gets the confidence to go through with the date.

So the next night Ned and Sara have a nice date together, and only get mildly creeped out by Lenny who wanders up to gawk at her celebrity. And after dinner they walk around the Squidport together while Ned just drones on with boring stories about his goober children. But for some reason this charms Sara, who likes that Ned is just an average guy, and they two end up having a great time and even kiss.

But the relationship quickly becomes a bit of an issue, because the tabloids have somehow learned of this huge movie start dating some random dude, and they descend on Springfield to get a story. They burst into Ned’s house while Sara is just hanging out with Ned and the boys, and they end up having to run away. And it’s not just paparazzi that are making things difficult, because it turns out Ned is a super pushy boyfriend, and tries to talk the director of the movie Sara’s in town filming out of all the nudity that was supposed to be in it. But I guess Sara likes that, so whatever.

The two continue to date, and even have a weird double date with the Simpsons, at the Simpsons house, since we haven’t seen them enough this episode I guess. Although it does lead to more tabloid attacks, and an irate Ranier Wolfcastle to show up. And after that dinner the two head out for a walk, and end up talking about their relationship. Turns out the movie is almost wrapped, and Sara will be moving back to Hollywood. She asks Ned to join her. This causes Ned to have a hilarious fantasy about the evils of Hollywood and James L Brooks before refusing to go. And shockingly, Sara decides that that means she’ll stay in Springfield.

So yeah, a huge movie star will now live in Springfield, and just like when Alec Baldwin and Kim Bassigner moved in, the townsfolk get crazy. But Sara seems to cope better, and even starts to ingratiate herself in Springfield social scene, even joining some sad book club that Marge participates in, and one ups everyone by inviting the author of the book they’re discussing.

But things take a turn when everyone in town is planning to go to some outdoor orchestra event, and Ned is shocked at the revealing dress that Sara has chosen to wear. He’s a little embarrassed by her, and makes that clear, until she tells him that she wants to have sex, which I guess they haven’t done yet. And Ned is awkward. The two go to some secluded town overlook, and discuss premarital sex with Bible verses. But in the end, they go through with it, and the Ned’s apparently amazing. But he tells her that she only gets one for free, and that they now have to get married, and Sara decides that this isn’t working out. The two end their relationship pretty amicably, and she moves back to Hollywood to continue her life, and Ned continues his life with all the single ladies in Springfield flirting with him. 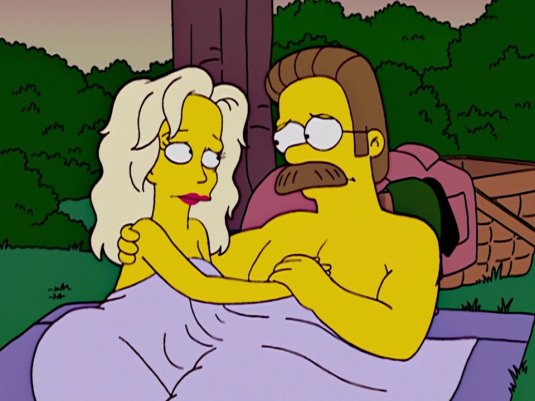 Ned’s character arc over the last few seasons has really been interesting. I always liked Ned as a character, but killing Maude really changed him. I complained in the episode about Maude’s death that it was more about Ned trying to move on than mourning his wife, but every episode that followed about Ned’s life has been pretty interesting. He’s had highs and lows, and this is a really interesting episode that adds to his life-story. The idea that Ned’s dating a movie star honestly wasn’t that interesting to me, it was more the idea that he’s dating at all. He’d previously been shown to be a little odd when it came to dating people after Maude, but this time he’s pretty healthy. He gets a little clingy and protective of her, and the whole premarital sex thing is odd, but he actually has a normal and romantic relationship with a woman. Yeah, it doesn’t work out, but the episode implies that Ned is going to do alright, and that he’s passed a huge milestone in his life, and that he’s further down the path of moving on with his life than ever before. This episode would have been better if they didn’t have to shove the Simpsons family into it every now and then, but as it stands we got a well-made and intriguing story about Ned Flanders, and his growth as a person and a character.

Take Away: Moving on is hard, and it may require the right partner, but you’ll be so glad when you get through it.

“A Star is Born-Again” was written by Brian Kelley and directed by Michael Marcantel, 2003.

Tagged as: 2003, A Star is Born-Again, Lifetime of Simpsons, Season 14, the Simpsons