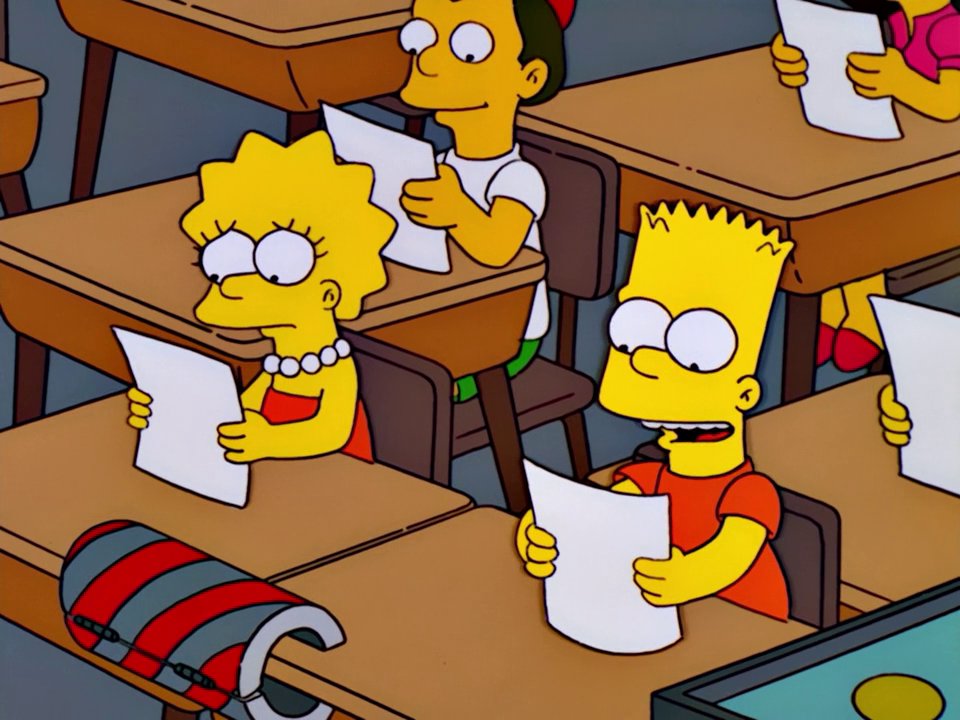 Hey, Season 14’s been off to a pretty good start hasn’t it? The Treehouse of Horror episode was pretty fun, and as far as cameo laden episodes go the rockstar one from yesterday was pretty good. Well let’s take that momentum and bring it to a screeching halt!

Our episode starts off with the family sitting around watching some new version of Survivor where it’s all animals. I’m kind of shocked they haven’t resorted to actually making that show by now. But that show was apparently too dumb for the Simpsons, and the flip channels to catch something called “Touch the Stove” where it’s just a host making people hold their hands to hot stoves. Reality shows, everybody!

The family complain about the terrible new shows that are on network TV, so Bart recommends that they get a satellite setup and get all sorts of other stupid shows. So Bart and Homer head to the horse track, win some money, and then go to a store to buy a satellite package. And sometime later that year a van finally shows up, hooks their satellite up to the roof, and they begin beaming in transmissions from a satellite being run by monkey astronauts.

And they love it. Homer and Bart quickly become addicted to having so many stupid channels, and begin watching whatever they can. They check out an NBC feed that shows Tom Brokaw purging in between commercials, Japanese Friends, and the clock channel. But while they’re busy becoming addicted to the TV, Lisa is busy studying for some big competency test that the Elementary School kids are about to take, which Bart is obviously planning on blowing off.

By the time that test finally comes around Bart hasn’t studied a bit, and has barely slept for days, instead just living on the couch with Homer, slowly going feral. But he has to go to the test, and heads in, barely dealing with reality. And when the test begins, Bart is less than prepared. Plus, the TV has destroyed his ability to pay attention, and he quickly starts daydreaming, ignoring the test and participating in a Horah dance with Tom Brokaw, Japanese Friends, a man with the head of a clock, a Pikachu ripoff, Bender from Futurama, and an insane clown.

Sometime later we see that all of the Elementary School kids are gathered in the auditorium for an assembly where Skinner is discussing the test. Apparently most everyone did good, and Lisa in particular did great. So great that they’re moving her up to the third grade. And when Bart starts making a scene to pick on Lisa, Skinner also announces that Bart did so bad he’s being demoted to the third grade. Apparently Bart’s strategy of losing his grip on reality was not a good one when it came to test-taking. Go figure.

So yeah, Bart and Lisa are now in the same class. That’s going to go great! And shockingly, despite its initial awkwardness, Bart starts doing great. Mainly because he already passed this grade, and remembers all of the info. And Lisa’s not doing so hot. The new class is more strenuous than she was used to, and she can’t bring herself to taking Bart’s advice and use his little tricks and memory games. And when Bart does slightly better than her on a geography quiz, she breaks.

And things are made even worse when the third grade class is ready to go on an overnight field trip to Capital City to learn about government, and they’re going to be each other’s buddy. There is a fun moment where they teach all the other third graders about the Punch Buggy game, which was nice. It’s always great when you learn that not everyone plays the same weird games, or has the same weird sayings as your family.

But by the time they get to Capital City the two are sick of each other, and just get more frustrated when a weird group of teenagers in some car from the 30s drive by and make fun of them having to hold their hands. But they get past this and make their way into the Capital, where the assembly is debating changing their state flag, since it’s basically just the Confederate Flag. How insane is it that we still have states that love that damned thing? But it gives the teacher an idea, and she tells all the buddies to craft their own flag submission that night.

So Bart and Lisa head back to the hotel, and Lisa starts making the flag while calling Marge and telling her what a screw-up Bart is. But Bart hears Lisa’s slam, and decides to prank her. So he ruins Lisa’s design, and the next day gives it to Governor Bailey, letting her see the horrible fart flag that he’s turned it into, embarrassing Lisa. And that fart flag was apparently the straw the broke Lisa’s back, because when they leave the Capital to head back to Springfield, the two get in a fight, and end up falling down a hill into some vast wilderness that’s next to the capital.

And because the buddy system is bulshit, they’re left behind and no one realizes they didn’t get on the bus. So Bart and Lisa are trapped in the forest, lost, and decide to try and find their way back to Springfield. Meanwhile Skinner has to stop by the Simpson’s house and tell them they lost their kids, before hopping in a car to head to Capital City and find them.

Bart and Lisa do a pretty terrible job of finding their way out of the woods though, and just keep getting farther and farther into them. So they hunker down for the night, and actually have a bit of a heart-to-heart where they apologize for the bad things they’ve done to each other. And the next day they wake up, and find themselves captives of a bunch of hillbillies who live in the forest. And instead of any manner of horrible things that should befall them, the hillbillies take Bart and Lisa back to the Capital, where they’re picked up by Homer and Marge. Oh, and Skinner says that they’re going to both go back to their old classes, so things reset. 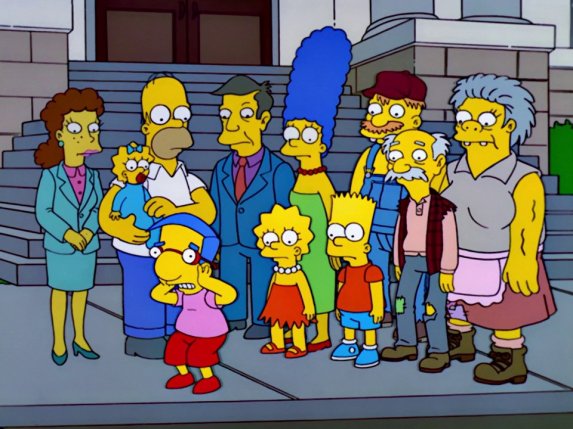 Yeah, I’m not a fan of this episode. I think the idea of Bart and Lisa being put in the same grade could possibly have some potential, but they had to go through a lot of bullcrap to get it to work, and then the reversion at the end just makes it all kind of pointless. I like episodes where Bart and Lisa have to come to terms with their relationship, and work things through, but this one just doesn’t work for me for some reason. And I’m not really sure why. For a while I thought it was because the only made up at the very end, but episodes like “Lisa On Ice” are great, and that one doesn’t have them make-up until the literal end of the episode. And they’re way more aggressive in that episode. Who knows, maybe this one feels like a dud to me because they didn’t go far enough. Neither of them does anything particularly mean to each other; they just kind of hate each other. It just felt kind of lazy, and required us believe this ridiculous idea that Lisa got put up a grade, and Bart got put down one.

Take Away: Having a kid skip a grade is probably not a good idea. Even if they’re academically ready, they’re probably not emotionally or developmentally, and it will probably end poorly. And you should always trust weird hillbillies who live in the forest.

“Bart vs Lisa vs the Third Grade” was written by Tim Long and directed by Steven Dean Moore, 2002.

Tagged as: 2002, Bart vs Lisa vs the Third Grade, Lifetime of Simpsons, Season 14, the Simpsons