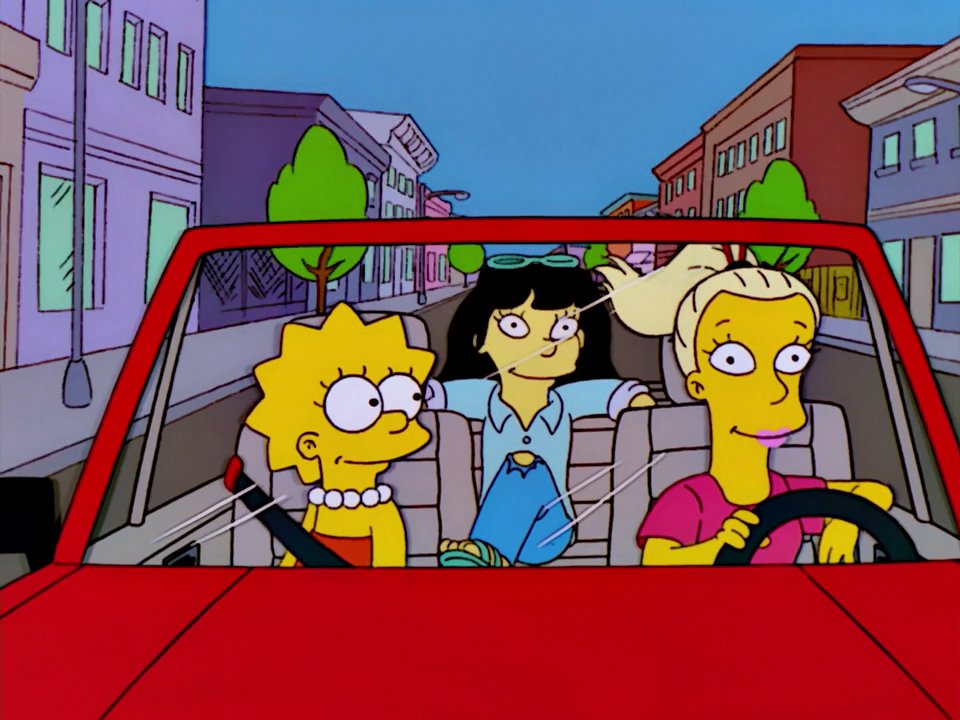 Hey, let’s end the week with a good old-fashioned Lisa episode. We haven’t been getting those as often, and while it isn’t a Lisa episode that follows the classic “Homer is stupid, Lisa is judgmental, they decide the find common-ground” formula that works so well, it’s still a pretty great episode.

Things start off with Lisa and her fellow second-graders participating in gym class while doing gymnastics. And things aren’t going great. Lisa shockingly isn’t great at physical activity, and the gym teacher is seriously thinking about failing Lisa, which would really mess up her flawless GPA, which is apparently the only thing keeping the school afloat. And since the gym teacher won’t just pass her to appease Skinner, she comes up with an alternative. Lisa has to go to a private coach.

So Lisa has to go to some gymnastics studio run by burning ball of white-hot anger, Lugash. And Lisa is less than thrilled. But after an insane fantasy where she meet JFK and he teaches her the importance of physical fitness before traveling back to Hell, she decides to give it a shot. Lisa then decides to buckle down and start training with Lugash.

But before we see how that’s going, we cut over to Krusty Burger where Bart and Grandpa are having lunch together. Bart kids a kid’s meal, and Grandpa gets a nostalgia-meal, which is a solid joke. But after Bart opens his and find his prize is a weird little dinosaur with Krusty’s head, disaster strikes. Because it turns out the toy was made in a sweatshop in China, and a Chinese mosquito has been trapped in the toy. So it escapes, bites Bart, and quickly gives him an insane disease. So it’s off to the hospital!

After we go back to Lisa for a while. Turns out she’s doing great at gymnastics! She has some crazy condition in her head that gives her prefect balance, so she’s a natural gymnast, and is able to pass her gym class. And after class one day Lisa starts chatting with the other two girls in her class while they’re changing in the locker room, and she realizes they’re awesome. They’re smart, fun, and love learning. Right up Lisa’s alley. So of course when they ask if she wants a ride home with them, she agrees.

But when they leave Lugash’s and go outside, Lisa makes a startling realization. They aren’t her age. They’re college students, and are just super tiny because they’re gymnasts. And when put in the spot, Lisa decides to lie and say that she too is a college student. So she hops in their car, pretends that she volunteers at a special-needs school when Ralph shows up and says he knows her, and they take Lisa to her house, where she claims she’s living in off-campus housing. They even invite her out to a coffee-shop to see a poet later.

Meanwhile, Bart is at Dr. Hibbert’s and it turns out that mosquito meant business. Because it’s given him something called Panda Flu, which doesn’t seem to make Bart sick at all, but is high contagious. And instead of just giving him a vaccine or something, Hibbert decides that he has to put Bart in a giant plastic bubble until he’s cured. I think someone needs to check on Dr. Hibbert’s medical license.

But enough of that, let’s cut over to Springfield University where Lisa has snuck into to perpetuate her lie. She starts wandering around the campus, loving every second of it, and running into the girls from earlier, who are stoked to hang out with her. And after spending the day on campus she goes to a coffee-shop with the two girls and listens to Robert Pinksy reciting poems. And it’s great. She even stays after having pizza and just shooting the shit.

But Lisa has to run out of the coffee-shop when she realizes that she was supposed to make a model for her social studies class, and she’s completely forgotten about it. So Lisa runs home, slaps together a garbage project, and brings it to school the next day. Luckily the rest of her class are morons though, so her half-finished project still gives her a good grade, and she decides to continue burning the candle at both ends.

Disaster strikes however when she decides to go back to the University during recess one day, and she’s spotted leaving by Milhouse, Martin, and Database. They for some reason decides to follow her, thinking that she’s up to something, and end up at the University as well. The three boys end up wandering the campus until they find Lisa, and every other student, in a massive anthropology class that’s just dissecting Itchy and Scratch cartoons. The boys get irritated at the analysis though, and end up making a scene, before being kicked out. But, in a move of real spite, as they’re leaving they mention Lisa’s a kid too, ruining her lie. 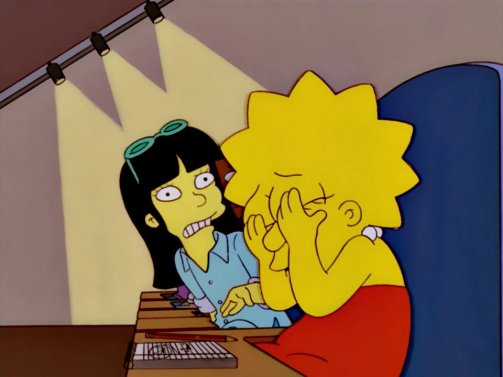 So Lisa is found out, everyone in the class freaks out, and her two new friends get all irritated that an eight-year old has lied to them. She then heads home, distraught over the whole ordeal, and for some reason gets yelled at by Marge and Homer for succeeding in college despite being eight. And things just keep getting worse, because the kids at school start treating her like crap because they think she’s stuck-up and above being a child. So everyone hates her now. Yay!

But while she’s feeling low, she runs into Bart, whose bubble has gotten stuck in a tree in the back yard. So she climbs up to be with him, and she’s shocked to find that he kind of loves being in the bubble. He’s completely acclimated to it, and has found that it’s made him super popular. And he decides to use that new found popularity to help Lisa. And his plan is to have her humiliate Skinner during some ceremony for him. So while Skinner is giving a speech next to a giant chocolate cake, Lisa slips into Bart’s bubble, drops from the roof of the school, splatters Skinner, and wins back the love of the school.

As far as Lisa episodes go, this isn’t one of my favorites, but it’s still pretty fun. I’ve always thought that Lisa’s character is kind of tragic right now, but that she’ll do great in the future. That’s kind of been a through-line in a lot of Lisa episodes, where she’s under-appreciated in Springfield, but Homer knows that she’ll do great when she’s older. And this is one of those episodes that really show that. Lisa’s going to kick ass at college. People are going to love her there, she’s going to finally fit in somewhere, and she’s going to blossom. But she can’t rush it. And that’s kind of what this episode gets to. The Bart stuff is okay, but pretty meandering, we’re here for the Lisa stuff, and it’s pretty spot-on.

Take Away: Don’t rush your childhood, even if you think you’re more advanced than your peers. Cherish our time as a kid.

“Little Girl in the Big Ten” was written by Jon Vitti and directed by Lauren MacMullen, 2002.

Tagged as: 2002, Lifetime of Simpsons, Little Girl in the Big Ten, Season13, the Simpsons