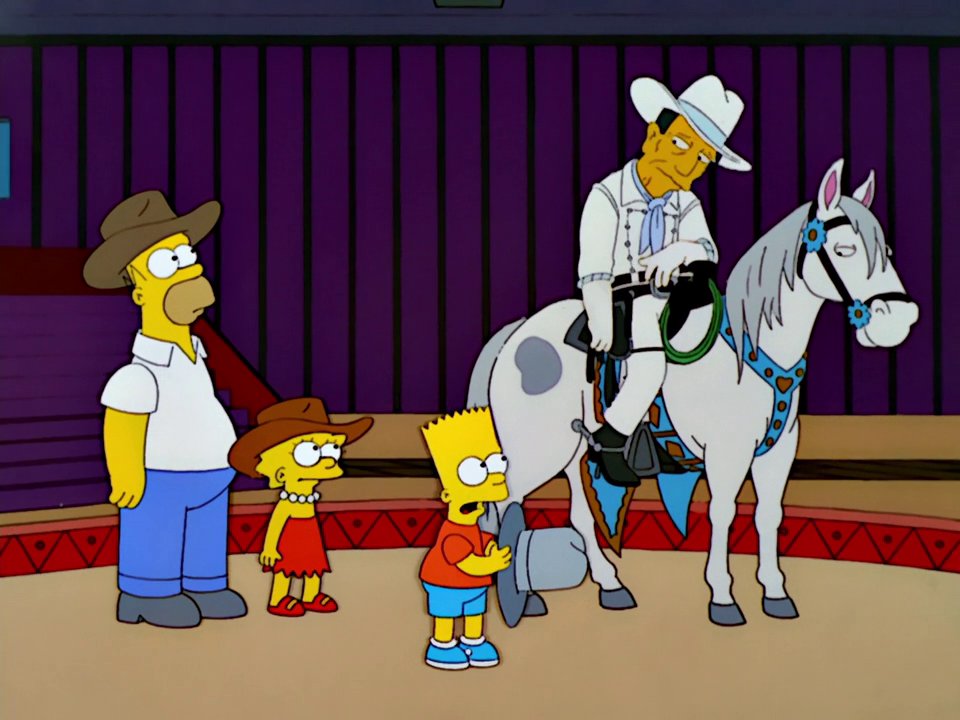 I feel like we’re firmly in the era of the show that had episodes I only ever watched once or twice. I think these episodes weren’t really on rotation in the repeats that would air every weekday night, because my memory of the episodes this week are pretty spotty. Like this one. Barely remembered it. I remember Bart met a cowboy once. That was about it. Let’s talk about it!

The episode starts off with Bart having a great day where everything seems to be going his way. He catches a homerun from Duff Stadium, finds two lucky dimes, gets free ice cream from a broken down ice cream truck, and runs into a nice dog. That is until the dog freaks out and starts trying to attack Bart, because it’s insane and apparently lives on the streets, trying to find boys to attack. The dog tries to bite Bart and ends up chasing him all the way home.

But that’s not the end of the dog, because for some reason it decides that it loathes Bart with ever fiber of its being, and is going to stalk Bart for the rest of its life, trying to kill him. It clings to windows to watch him, follows him to and from school, watches him in class while riding on a teeter-totter, and just generally acts like a goddamn serial killer. Plus, it only acts vicious to Bart, and is super kind and sweet to everyone else it comes across, just making the whole thing weirder.

And because the dog acts sweet to everyone else, people just think that Bart is crazy and start ignoring him, just letting him get attacked by this vicious stray dog. But after the dog gets so bold that it tries to attack Bart on the school-bus the two get in a giant chase around town, until Bart finds some mysterious mansion, and decides to hide on its grounds. So he sneaks through the gate that surrounds the mansion, and starts to feel safe. That is until he turns around and finds a whole bunch of angry looking animals waiting for him in the mansion.

But it’s all good, because they aren’t real animals; they’re taxidermy trophies that are just awkwardly positioned to scare people sneaking into the mansion. And when Bart freaks out about the trophies he ends up getting the attention of the owner of the mansion, a retired cowboy actor named Buck McCoy, who wanders up to introduce himself to Bart. Buck’s pretty charming right off the bat, doesn’t seem to mind that this kid has broken into his property, and even teaches Bart some pressure-point trick that makes the evil dog docile.

So Bart’s got a new pal! An elderly cowboy! That sounds normal. Anyway, Buck decides to show Bart around his mansion, because Buck clearly doesn’t get a lot of visitors, and Bart gets to see all kinds of props and memorabilia from Buck’s film career, including his horse Frank the Wonder Horse! Which makes this the second episode in a row that Bart got to go to the mansion of a movie start to gawk at his belongings. That’s odd. 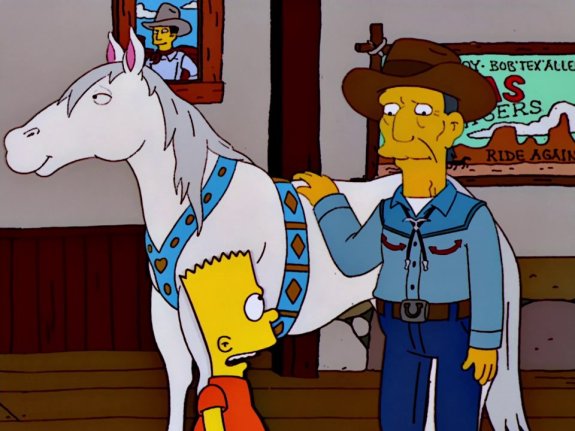 But eventually Bart has to leave, and Buck says that he’s welcome to visit anytime. So Bart heads home, tells the family that the dog won’t be bothering him anymore, and tells everyone about Buck. Which is big news to Grandpa, who turns out to be a huge Buck McCoy fanboy. And since his parents are cool with Bart spending his time with an elderly stranger, he keeps going over to the house, even bringing Milhouse to enjoy Buck’s wisdom and skills as well.

However, as Bart’s impression of Buck starts to grow, so does Homer’s jealousy. Homer apparently cares about being Bart’s role model in this episode, and is getting really self-conscious about Bart finding some other guy take on that role. So, of course, when the family invite Buck over for dinner and he decides to show them some of his movies, Homer has to act like a petulant child, trying to knock Buck down a peg or two.

It doesn’t work though, and Bart is still obsessed with Buck, even going so far as to getting the children of the Elementary School into Western culture in the hopes that it will give Buck a come-back. And shockingly it works. The kids start to love cowboy stuff, and Bart’s even able to get a meeting with Krusty to pitch Buck coming on the show. So Buck heads out to Krusty’s studio to practice his trick-shooting for the show, and he still has a whole lot of talent. 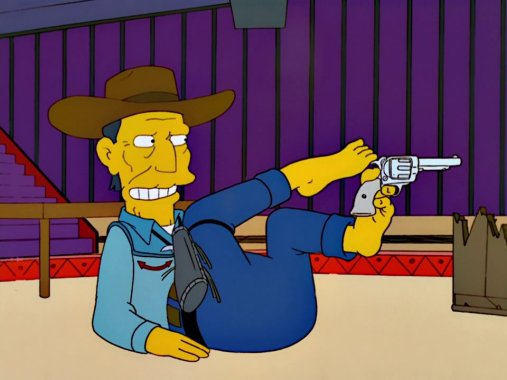 But he also has a lot of nerves. Buck is apparently a) really nervous about being on live TV again, and b) an alcoholic. So Buck starts chugging whiskey to make his cameo in Krusty’s show more tolerable, and it does not go well. Later on, when the show is airing, a sketch involving Mr. Teeny being tied to some railroad tracks begins (including the ridiculous line of, “We don’t take kindly to transvestite chimpanzees”) and Buck comes marching out, drunk as hell. At which point he tries to do his trick shooting, breaks several lights, and ends up shooting Krusty in the arm.

That could have gone better. So Krusty bans Buck from ever coming on the show again, and Bart’s esteem for Buck has plummeted. Which Homer is really excited about. But when Homer tries to capitalize on Bart’s crisis by trying to get him to accept Homer as his new hero, Homer realizes that Bart is really hurt about the whole thing. And because Homer actually is a good father sometimes, he decides to try and fix Buck’s life, for Bart’s sake.

So Homer and Marge head to Buck’s mansion and try to help him get sober. Seemingly against his wishes, but whatever. They pour out all his booze and try to take him to some sort of cowboy AA that ends with Buck getting branded. But the real demonstration of Buck’s changed life is when Homer hears about a crazy bank robbery in progress, and somehow convinces Buck to intervene. So, with Bart watching, Buck shows up to the bank robbery and manages to stop it, saving the day. At which point Bart’s opinion of Buck is back to normal, and Buck rides off into the sunset, promising to never speak to Bart again. 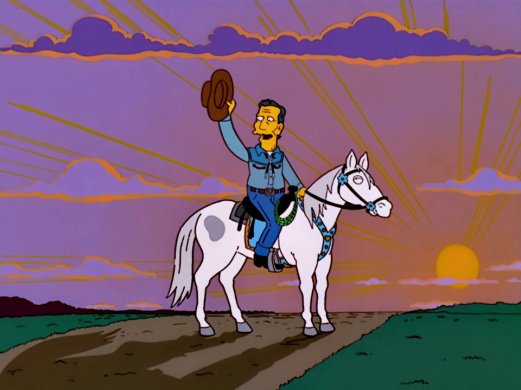 Yeah, that was an okay episode I guess. I like the premise of Bart finding a new, more manly, role model and having Homer be really self-conscious about the whole thing. That makes sense to me, even though Homer doesn’t normally care about being Bart’s hero. And hey, cowboys are cool, even old ones who live by themselves slowly drinking themselves to death like Buck was apparently doing before Bart crashed into his life. And despite some creepy undertones, Bart and Buck’s little relationship is pretty sweet, and it was nice seeing the family help this old man find a purpose in his life again, even though they kind of force him into sobriety against his will.

Take Away: If you’re ever being chased by a demonic animal, find your local cowboy.

“The Lastest Gun in the West’ was written by John Swartzwleder and directed by Bob Anderson, 2002. 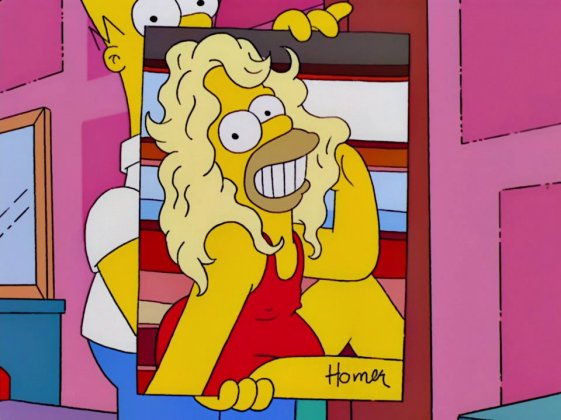 Tagged as: 2002, Lifetime of Simpsons, Season 13, The Lastest Gun in the West, the Simpsons