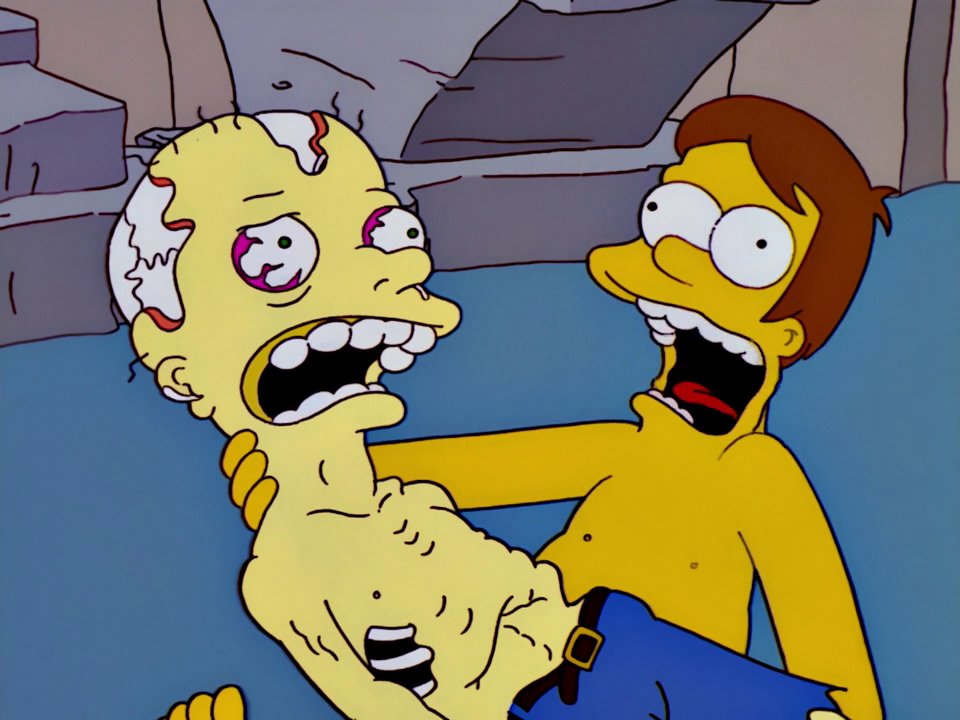 You know what a good way to end the week is? Horrible repressed memories and accidental deaths. Always a nice way to head into the weekend.

Our episode starts off in the weirdest place, with Marge coming home after grocery shopping and realizing she’s accidently bought the wrong brand of paper towel. Thrilling! Turns out she’s bought some brand called Burley that has a sexy lumberjack as a mascot that Marge instantly falls in love with. And thus begins Marge’s weird fixation with this mascot. And the brand as well. It starts off as an obsession with the mascot, but over time it becomes clear that she really just loves the product as well.

Do you know what the biggest red flag is when it comes to obsessing over a mascot? Is it when you start fantasizing about the mascot while kissing your husband? Nah, that’s weird, but Marge can get weirder. Because Marge straight up writes a fan letter to this fictional character! Things are weird. And when Homer realizes that she’s done this he decides to play a horrible prank on her. So he calls Marge from Ned’s phone, pretending to be the model, Chad Sexington, and says he’s coming over to visit Marge.

So Marge loses it and starts getting the house ready for this paper towel celebrity to visit, while Homer and Bart can barely contain their sadistic glee. But Marge’s happiness and excitement is destroyed when the doorbell rings and she’s surprised to find their guest isn’t Chad Sexington, it’s just Barney in a bad lumberjack costume. So Homer and Bart laugh their asses off while Marge is mortified, and heads upstairs to avoid them. Which is a great thing to do to your spouse. But Lisa has a good way to make it up to Marge, and Homer suggests that the family go out for dinner and a show.

So the family pack up and head out to the Pimento Grove to have a meal and check out their odd entertainment the fancy restaurant provides. First they see some pianist play some songs, which seems nice, but then a mentalist named Mesmerino shows up to ruin the night. He also seems to be an insult comic, because he just keeps ribbing everyone. But he does have some skill, because we see him turn Professor Frink into a “make-out artist.” The night does take a minor dip though when he refers to Mr. Burns as Smithers father and Smithers has to awkwardly say that his father died when he was young. But surely that has nothing to do with the episode!

However things take a turn when Homer volunteers to be the next victim. And he’s super susceptible, because he instantly becomes a research scientist and Emily Dickinson. So things are going good! Until Mesmerino tells Homer to become himself at ten years old, where he promptly starts screaming uncontrollably. Mesmerino freaks out and releases Homer from the hypnosis, where he continues to scream.

And the screaming does not stop. We see Homer screaming heading home, sleeping, and finally being dragged back home from work by Lenny and Carl the next day. So things aren’t going great. Carl assumes that it’s repressed memories, and they decide to give Homer some weird American Indian tea that will jostle loose his memories. So they brew the tea up and give him some, and the stories start flowing.

Homer starts to tell the story of himself as a kid in the 70’s, hanging out with Lenny and Carl, and the whole thing is basically just Stand By Me. The three friends are just wandering around on some traintracks when they come across little Fat Tony and his goons, where they’re saved from a beating by little Moe. Oh, and now Moe is there in the present too, helping tell the story.

They talk about an evening where the four friends camped out in the woods, talking about the newly opened Nuclear Plant, before heading to a quarry the next morning for some swimming. Unfortunately when they get to the quarry they find it’s too shallow to swim in, and plan to leave when Homer jumps in anyway, and lands in some mud. At which point he starts poking around in a drainage pipe, trying to see where the water went, and ends up finding that the blockage is a goddamn human corpse!

Hence the screaming. And now that they have the answer everyone starts doting on Homer, realizing that the legitimately saw something horrifying. The only thing is…who was the body? Homer never told anyone, so it’s probably still down there. And they decide to go solve the crime as the Simpson family! No Lenny, Carl, and Moe, who have to sadly leave, because they aren’t important anymore.

So the Simpsons head out to the quarry, in the middle of the night, and end up running into Chief Wiggum, who they let come with them for some reason. They get to the quarry, and quickly realize that there’s way too much water to find the corpse. But Marge is able to solve the puzzle by throwing a bunch of Burley paper towels into the quarry, sucking up all the water. Sure, I guess that makes sense.

And when the water is drained they quickly find the skeleton of the body Homer found, and decide to climb through the drainage pipe to see where it came from. And wouldn’t you know, there’s a creepy hatch at the end of the pipe. So they open the pipe and are shocked to find themselves in Mr. Burns’ office. What the what? Obviously they have a lot of questions, and Burns is oddly into telling them everything, even providing a film reel to show exactly what happened. Turns out the body is that of Waylon Smithers Sr, and he has video showing Smithers valiantly sacrificing himself in the nuclear reactor to save the town. So I guess Burns raced the Smithers we know? And he never told him what actually happened to his father. Case closed!

I guess this episode is a flashback one, which I’m normally a huge fan of, but this episode doesn’t really work for me. The whole first act is strange as hell. Marge seriously falls in love with a mascot? And holy crap is that prank mean. It just kind of threw me off the whole episode. I do kind of like the idea of Lenny, Carl, Homer, and Moe being friends for decades, and those flashbacks were pretty fun. But the last third of the episode really just seem strange to me. It’s odd that they brought the stupid paper towels back, and it really felt like they sped through the whole “Mr. Burns is actually the killer, except he’s not,” thing. I feel like the episode could have worked if they had cut the paper towel plot, and let the story breathe a bit, because it really ramps up and stops making sense at the end, when it could have been a weird, fun little mystery.

Take Away: If a friend of yours sacrifices themselves for the good of a town, maybe let the friend’s son know?

“The Blunder Years” was written by Ian Maxtone-Graham and directed by Steven Dean Moore, 2001.

Tagged as: 2001, Lifetime of Simpsons, Season 13, The Blunder Years, the Simpsons