What is it with these last few seasons that start off with really weird and weak episodes? I don’t know what it is about this one, but yikes. There are a few good gags, but this episode is rough. I probably should do some research or something, and see if Judge Judy was big during this time, or if judges were actually pulling bullshit like this episode around the time it came out, but I’m a lazy, lazy man. So let’s just get it over with.

This episode starts off with Bart and Milhouse being driven to school by Homer for some reason, while being tortured by his horrible singing. They catch a lucky break though when Homer sees some sort of KBBL party-wagon, and ditches the kids in the middle of town to go chase the van to get some stupid prizes. So left on their own, they kids start wandering the town, I guess deciding to play hooky from school at this point.

And they pretty quickly find something to occupy themselves when they come across Chief Wiggum’s cruiser sitting unattended in a donut shop parking lot. So the kids go gawk at the car, and realize that it’s unlocked. So obviously they get in and start goofing off. They play around with the gadgets inside the car and get Ned to hula out of his pants before things go wrong. Because apparently that whole time there was a K9 in the back seat, and it suddenly decides to start growling at them. The kids freak out, and end up getting the car off its emergency break, and it goes cruising down the road, until it runs through a crowd of promising young athletes and smashes into a tree.

So Bart and Milhouse are in trouble, and are sent down to court to meet with Judge Snyder. But they’re in luck, because apparently Snyder is super lenient to youthful hijinks, and always lets them off. Milhouse is quickly forgiven for his offenses, and gets to go home, but right as Bart heads up to get his sentence, Snyder realizes that his vacation has begun, and leaves. So now Bart’s future is up to the temporary judge, Constance Harm.

As you may be able to guess, a judge named Constance Harm isn’t going to be a pleasant character. She’s a weird Judge Judy knock-off who says folksy sayings and yells at everyone. And she’s not really into letting “boys be boys.” She gets pissed at Bart’s crimes, and ends up getting even madder when she realizes that it all happened because Homer is a shitty parent. So the comes to the logical decision that the only way to deal with this crime is to punish Homer and Bart, and decides to get them tethered together, unable to escape each other’s company for the length of the sentence.

Shockingly though, it seems to be going great at first. Homer and Bart are being little pals for a while, running around and having a good time while being tethered together. Homer even comes to school with Bart, and gets to be distracting in class with his night terrors, which primarily comprises of him screaming in his sleep about “cobras.” He even helps Bart hit a home run, even though that that requires Bart to drag Homer around the bases. Hell, they even get to spend the night at the Plant since Homer can’t work during days, continuing their bonding. 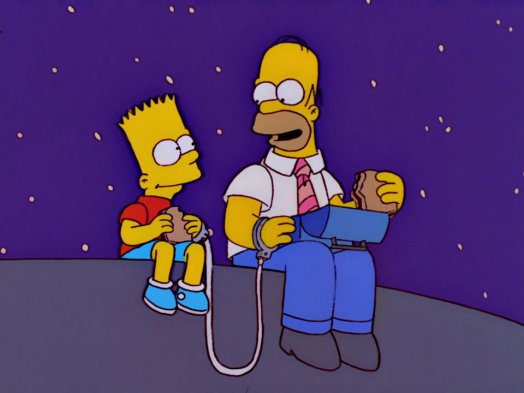 But things start to fall apart when Homer needs a beer. He heads into Moe’s, and for some reason Moe says kids aren’t allowed in the bar now, so Bart is forced to stand outside, in the cold, dark, sketchy streets. And it just gets worse as Homer tries to get Bart to pee in a bottle instead of walking to the bathroom. But it really hits the fan when Homer is trying to get Marge to have sex while Bart’s stuck on the ground. The two start fighting and whipping each other with the tether until Marge can’t take it anymore, and cuts the tether with a knife. Everything’s solved!

That is until they find out that the tether has some sort of crazy fiber-optic device in it that lets Judge Harm yell at them. She’s furious that Marge cut the tether and ruined her punishment, and brings the family back to the court. And it doesn’t go well. Because Harm decides that Marge is in need of punishment too, and ends up putting Homer and Marge in crazy stocks.

Which is kind of weird, because Bart is now no longer being punished, despite him being the one who committed a crime. Whatever, we get to see Nelson whip Homer’s ass with an extension cord as part of the court-ordered punishment, so that’s fun. And pretty quickly Homer and Marge decide they can’t do this any longer, and break into Ned’s garage to break themselves out of their stocks. Which they accomplish with a table-saw and a candle flame.

And once they’re free they’re able to enact their master plan of humiliation. So they get some robber costumes and start heading out to Constance Harm’s house, which turns out to be a houseboat. They sneak onto the dock and get ready to hang a giant sign that says “Big Meanie” to show her what’s what. Unfortunately their great plan is ruined when Harm’s pet seal pops out of the water and start barking at them.

So Homer does the only thing he can, and hucks a cinder-block at Harm, hoping that it will brain her and solve all of their problems. Homer luckily misses Judge Harm and doesn’t murder her. He only sinks her house. Which is obviously not going to help the whole “Judge Harm hates them” thing. Homer and Marge are then brought before the Judge once more, but right before she passes down some horrible sentence Judge Snyder shows back up from vacation, striking down Harm’s ruling, and saving Homer and Marge from the horrible punishment she had planned. So it’s all good. 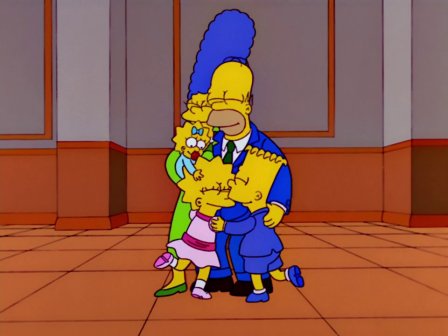 I’m no too overly fond of this episode. There are some good gags, like Homer’s night-terrors, and the solid joke where Snake notices Judge Harm said that she used to be a little boy, but overall it doesn’t work for me. It’s just kind of ridiculous. Like I said earlier, I’m not sure if this episode is referencing something specific, or just an insane riff of Judge Judy, but Constance Harm is so incredibly unpleasant and not even entertaining. It’s just very strange.

Take Away: If your child goes to court so much that you’re on first name basis with the judge, you’ve done something wrong as a parent.

“The Parent Rap” was written by George Meyer & Mike Scully and directed by Mark Kirkland, 2001.

Tagged as: Lifetime of Simpsons, Season13, The Parent Rap, the Simpsons