Oh boy! Let’s get ready for a complicated as hell episode to discuss! This is a weird episode, but I kind of dig it, so let’s see if I can puzzle out the complicated plot in a coherent way.

The episode starts off with an average morning on Evergreen Terrace as we zoom into Homer and Marge’s bathroom while Homer is applying anti-perspiring. And when Marge announces that breakfast is ready he runs down, and we get a brief Chiron letting us know that this is “Homer’s Day.” So Homer runs down to the kitchen with the kids, and is saddened to see that the breakfast is some weird mush that no one is interested in.

But they end up all running away, Bart to go see Milhouse who’s ringing the doorbell, and Lisa and Homer to check out Lisa’s science fair project. Which is pretty incredible. She’s somehow made a grammar robot named Linguo that can correct anyone’s grammatical mistakes. Which obviously results in Homer pouring beer down its little mouth, assuming it’s a party robot. So Lisa heads back upstairs to repair Linguo while Homer busies himself by bothering Marge.

For some reason Marge is cooking brownies, despite it being the morning, and Homer decides to try and grab one while she’s cutting them. This proves to be a terrible mistake, because while messing with Marge, Homer accidentally gets his thumb cut off. It flops down to the floor, and while Marge and Homer are freaking the hell out Santa’s Little Helper runs in, grabs the thumb, and runs away with it. 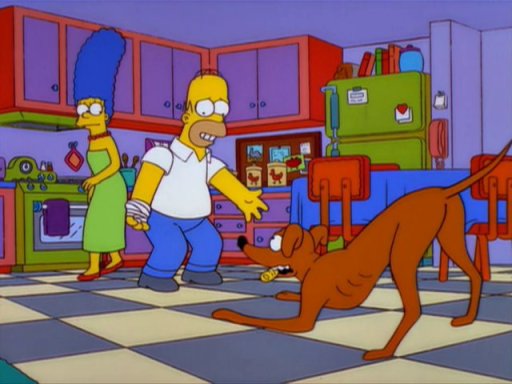 So Homer goes to chase Santa’s Little Helper and rescue the thumb while Marge calls the police. Unfortunatley Wiggum isn’t interested in helping them, and just wants to arrest her, so she tells him they live at 123 Fake Street, and hangs up. Meanwhile Homer has chased the dog into the Flander’s house and rescued his thumb, so they decide to head out to Dr. Hibbert’s.

But this just isn’t their day, because as they’re driving to the hospital they end up rear-ending Ranier Wolfcastle’s crazy sports car, and piss him off enough that he just starts destroying the Simpson’s car. But that’s not going to stop them, so they sneak out of their car, and steal Wolfcastle’s to get to the hospital, where Hibbert promptly lets them know that he won’t help them because they don’t have thumb insurance.

So they head off to Dr. Nick’s, hoping that he’ll help them. But the ice they’ve put the thumb in is starting to melt, so they stop at Moe’s to get more ice. Which obviously results in Homer sitting there and drinking for a while. And when he’s finally done he comes outside, and is shocked to find Marge gone. So he starts walking to Dr. Nick’s, hitchhikes with Cleetus, and they get to Dr. Nick’s.

Only to find it currently burning to the ground. So, with yet another hope smashed, Homer starts wandering to Shelbyville hospital, hoping to save the thumb. But it’s just pointless, and he starts to throw the thumb away in a trash can, only to be stopped by a sudden explosion from the city. And as Homer wonders what the hell just happened, the destroyed head of Linguo the robot lands next to him.

What the hell? What’s going on? Well, let’s let the episode reset and see if that explains everything! So the episode starts over again, except this time we follow Lisa’s day. We see her go down for breakfast, and show Homer Linguo, just like we’d seen before, but this time we follow her up to her room while she repairs Linguo, ignoring Homer’s scream from the kitchen. And once Lingo’s fixed she heads downstairs to head to school, but misses the bus.

So Lisa runs to the backyard to find her bike, only for that to be stolen. So with no alternative she goes to ask Marge for a ride, and sees her speeding away with Homer. That sucks. And with no alternative Lisa starts running to school, and almost gets hit by a Krusty’s limo. The limo pulls over, and he offers to give Lisa a lift, telling Mr. Teeny, who is of course driving, to take her to Springfield Elemetnary.

Mr. Teeny drives Lisa to school, and she get out, running to the science fair. But she’s a little confused when she gets to class, and finds a strange French class going on. Because it turns out there’s two identical Springfield Elementary schools, and she’s at West Springfield Elementary. Lisa obviously freaks out, and starts to run away again, before running into some kid named Thelonius. The two fall in love for some reason and hang out for a bit before Lisa leaves to find her real school again, promising to find Thelonius in high school. 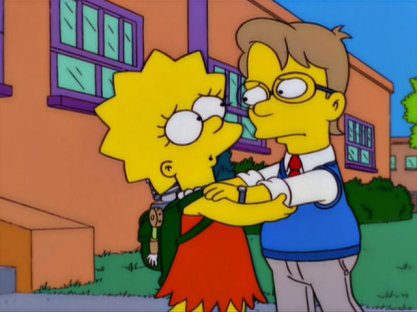 Lisa runs through town, finally coming across Moe’s in the hope that Homer will be there to give her a ride. So she goes in, finds Homer not there, and ends up having a chat with Chief Wiggum, who is there running some sort of sting. He chats with Lisa, and lets her know that the police have a rat infiltrating Fat Tony’s organization, only to get the rat seemingly shot. So Lisa runs away, just as Marge is dropping off Homer, and Marge decides to drive Lisa to school.

They start driving to school, but run out of gas since Marge couldn’t understand the sports car’s gas-gage. But luckily Cleetus’ truck is driving by, so they hop on, hitching a ride. And when the truck gets to the burning office of Dr. Nick, as we saw earlier, they get out and steal the car, driving off to the school. Unfortunately, as they’re approaching the school they get stopped when a manhole cover suddenly opens, and Bart comes climbing out!

Reset! The episode starts over again, this time focusing on Bart, and we see the morning pan out as we’ve seen before. But this time we follow Bart when he leaves to talk to Milhouse, and we see that Milhouse has found something amazing in the woods, and wants Bart to follow him. So they steal Lisa’s bike for Milhouse, and head out to some weird cave in the woods that Milhouse goes into to cry.

But this isn’t about depression, it’s about fireworks! Because Milhouse has found several burlap sacks full of fireworks that are just dying to be set off by two dumb boys. So Bart and Milhouse hang out, firing fireworks and having a blast, until they strap some to the tire of Lisa’s bike, and it flies off, landing on an oxygen tank in Dr. Nick’s causing the office to light on fire.

The boys obviously freak out about that mistake, and go to hide in an abandoned building when they hear the police approach. And the address of the building? 123 Fake Street. So Wiggum, Eddie, and Lou burst into the house, expecting to find Marge, and are shocked to find Bart, Milhouse, and a whole bunch of fireworks. And in exchange for them not being arrested with the bootleg fireworks, they agree to help Wiggum catch the person behind them, Fat Tony! Uh oh. 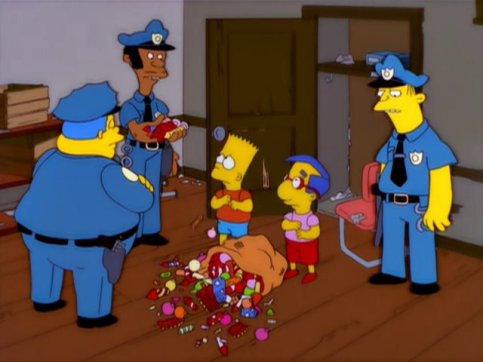 So Bart gets a wire strapped to him, Wiggum sets up base camp in Moe’s, and the boys head back to that cave to pretend to be buyers. And Fat Tony is super cool with this sale, until Wiggum’s voice suddenly starts coming out of wire, blowing their cover. The mobsters get pissed about this, but Bart sets off a little firecracker, causing that gun sound we hears earlier, and he and Milhouse run off.

They run through the cave, find a ladder leading to a manhole, and start to escape, only to catch up with the Marge and Lisa stuff we saw earlier. So Bart and Milhouse climb out of the manhole, and run into an alley to avoid the gangsters. But they still get cornered, and the mobsters start advancing on the poor boys and their sack of fireworks. But Marge isn’t going to let her son be murdered, so she does the only thing she can, and throws Linguo at them.

Which proves to be a bad call, because Fat Tony, Legs, and Louie don’t exactly have good grammar, and the little robot starts to over-load, before shooting sparks, causing the sack of fireworks to explode. So the gangsters are stunned, Bart and Milhouse are safe, and Homer shows up after seeing the explosion. But the day is saved when Fat Tony suggests a way to solve everyone’s problem, and has Legs reattach Homer’s thumb as Lisa’s science fair project. Everyone wins! Oh, and Mr. Teeny shows up to let us know that this episode makes no sense.

Oof! I’m not going to lie folks, this was a hard one to write up. I really like this episode, but it’s complicated as hell. A lot happens in this episode, way more plot than most other episodes, and Mr. Teeny’s right, it doesn’t make a whole lot of sense. But it’s fascinating. The episode has some good jokes, and some crappy ones, but the thing that really clicks for me about it is the insane structure. It’s such a weird and bold narrative choice to even try to make an episode like this, and despite the fact that it doesn’t make 100% sense, it’s still pretty great. There are some parts that could easily be cut, like that weird little scene with the Thelonius dork, but for the most part it’s a well-structured little experiment that I really appreciating.

Take Away: Don’t cut your spouse’s appendages off, because there won’t always be mobsters to save the day.

“Trilogy of Error” was written by Matt Selman and directed by Mike B Anderson, 2001. 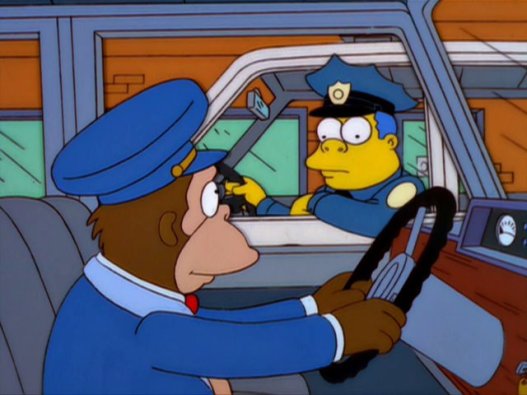 Tagged as: 2001, Lifetime of Simpsons, Season 12, the Simpsons, Trilogy of Error