I’ve been pretty harsh when it comes to the vacation episodes here on the site. I still like “Bart vs Australia,” but most of the other ones have been really lackluster during this viewing. But this one we have here? I kind of love it. It’s stupid as hell, but I really dig it. So let’s go to Africa everybody!

Things start off oddly enough with Homer, Bart, and Lisa grocery shopping because Marge is busy taking Maggie to the hospital. And this is obviously a bad call, because Homer lets the kids buy whatever crap they want, getting two carts full of garbage. And then, like all horrible people, Homer then decides to start harassing his bag-boy after they get checked out. And listen, I worked as a bag-boy for like two years, and it sucks enough without shitty customers making ridiculous demands. But unlike real bag-boys, this one finally snaps, and decides to go on strike for their horrible working conditions.

And that’s where the plot get going, because as the family are digging around their cabinets to find something edible, Santa’s Little Helper smells some food in the attic, and starts running off to eat it. But right as he scrounges up Homer’s old elementary school lunch box, the family show up and take the box from him. Because it turns out the food that he was smelling was an ancient box of animal crackers, which Homer dives right into. But as he’s eating the cookies he comes across a solid gold giraffe cookie, which according to the box means he just won a trip to Africa!

So Homer goes to the company that used to make the cookies, and demands his vacation. Which they have no interest in fulfilling, until they accidently cause the box to smash into Homer’s eye, and decide to send the Simpsons to Africa so he won’t sue. The Simpson are going to Africa! And some poor little tribesman is not happy, knowing that “evil is coming.”

The Simpsons then get on a plane and cross the world to get to Africa, while the country they’re landing in changes its name three times before they land. And once they do land they meet up with their guide, Kitenge, who will be showing them around the continent, and keeping them alive. And after briefly chatting about their new all-powerful leader Muntu, they get to the awesome tree-hotel that the family will be staying in.

And the next day they head out to start checking out the Savanna, and we get a lot of great gags. We see animals reenacting the Lion King, we see a rhino being born in an egg, and a giraffe coming out of a gopher hole. Just like in real life. We also see Kitenge scare off some poachers and stop by the Olduvai Gorge to look at ancient human fossils. But things really get going when they stop by a Masai village to hang out and party.

But during the party Homer makes a faux pas and accidently pisses off a hippopotamus, which starts attacking. The Simpsons run away while the hippo starts to maul Kitenge, and they decide to grab a shield to use as a boat, since hippos hate water. Which works, so they get on the shield and start sailing away, even though Kitenge sees that they’re heading down the wrong fork in the river, and start going to some bad parts of the country. 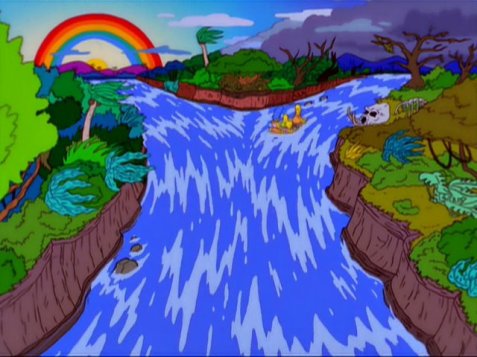 The Simpsons are now on their own, and are lost, so they stick on the boat and keep sailing down the river, even seeing some intimidating looking natives who are just talking about how they want to help the family. But Homer throws a spear at them, so they don’t help, and the Simpsons end up falling off Victoria Falls. Luckily though they land in some sort of giant flower, saving themselves, and they start wandering the country, slowly going mad.

But providence shines on the Simpsons, because as they’re wandering around in the jungle they come across a chimp that beckons them to follow it. And when they do follow the chimp, it leads them to a chimp preserve run by renowned scientist Joan Bushwell. So the Simpsons head in, meet Bushwell, and start having a good time with her, hanging out and learning about chimps.

But disaster strikes when those poachers from earlier show up, and start laying siege to the chimp preserve. The Simpsons help Bushwell to fight the poachers, but they still manage to get in. And when they do, Lisa realizes things aren’t on the level, because they aren’t poachers, they’re from Greenpeace, and they’re there to rescue the chimps. Because it turns out Bushwell isn’t a scientist, she’s training the chimps to mine diamonds for her. But she bribes the Simpsons with diamonds, so they don’t tell anyone, and everything works out. Hell, even Kitenge gets to be the new ruler of the country. Everyone wins!

This episode is stupid as all hell, and I adore it. It may be nostalgia, but this episode just works for me, and still had me giggling pretty much the whole time. If you actually think about it, the episode doesn’t make a whole lot of sense, because they seems to travel the entire continent of Africa in the episode, but whatever, the jokes are solid. I couldn’t stop laughing at all the ridiculous nature jokes, like the rhino coming out of the egg, and it just bolstered a ridiculous story. The Simpsons don’t need to go to Africa, that’s nuts, and it’s especially crazy that they get to go there thanks to a bag-boy strike! It’s just crazy. And I love it.

Take Away: Diamonds fix everything, and everything you know about animals is wrong.

“Simpsons Safar” was written by John Swartzwelder and directed by Mark Kirkland, 2001.