Hey everybody! So I know that I’ve been complaining that there’s been a distinct lack of serious or emotional episodes in the series lately. And I stand by that. It was a defining feature of what made the Golden Age so great. But it’s not like I expect the whole series to be a drama or something, it’s still a cartoon comedy. And here’s a great example of some fun, stupid comedy.

The episode starts off in the strange place of Homer watching some terrible Sportscenter show where it’s just a bunch of dudes in heinous suits making fun of each other. But this exciting bit of entertainment is shut down by Marge, who shows up to tell Homer that the family is going to go watch some terrible Cirque du Soleil knock-off called Cirque du Puree and he’s going to have to come. He fusses a bit, but begrudgingly agrees, and they head out to see the show.

The family head out to the fairgrounds and check out the stupid show, while Homer complains that whimsy and wonder isn’t as good as fun and excitement. The show is exactly what you would think, with jugglers and acrobats, while everyone but Homer seems to be enjoying it. But things start falling apart when a crazy storm rolls into town and starts destroying the tent, causing a man with a duck bottom to cancel the show so everyone can flee.

The Simpsons head home to avoid the storm while the radio promises them a huge blizzard, which gets the kids excited. And the next morning they’re happy to find that the snow has come! Unfortunately Springfield Elementary hasn’t cancelled school, unlike everyone else, and the kids have to go to school. So after a dangerous bus ride, a group of only the important school children show up for school and find that most of the other students bailed, and so did the teachers. So it’s just important kids and Principal Skinner watching terrible movies all day!

The kids obviously are mad that everyone else bailed, and get even more mad when Skinner makes them watch a terrible movie from the 30’s called The Christmas That Almost Wasn’t But Then Was! And it’s crazy bad. But believably bad. It really looks like some of the terrible Christmas movies that you would see on Mystery Science Theater, like Santa Claus Conquers the Martians or Santa Claus. It’s great. There’s goofy hobgoblins, little beau peep, and stage-hands wandering into frame.

Luckily though the DVD lights on fire, so the kids are free of the torment, and allowed to leave. However, they’ve been inside the school all day, and it’s been snowing all day, so they’re trapped. The snow is up to the school’s roof, and there’s no way to escape. And because the city sold all of their snow-plows to Mr. Burns, they’re screwed. And obviously, the kids turn on Skinner immediately.

Meanwhile, Homer and Ned decide that it’s up to them to save the kids, so they make a make-shift plow and head to the school to free the kids. We also get the great gag of Ned remembering Mr. Plow, yet Homer has no recollection of it. And as the two dads head to the school we cut back and see that things are falling apart quickly. Willie is helping Skinner ration relish out to the kids to eat, and they’re starting to rebel.

So Skinner runs away from the kids for a bit, and goes to crash in his office and think. And while he’s in there, he notices his army footlocker, and decides to revert to his Vietnam mentality, and heads back into the cafeteria where the kids are rioting, dressed in his sergeant uniform, and starts barking orders at the kids. They freak out a bit, and start listening to him, and Willie is getting some serious respect for Skinner, letting him get a hold of the situation. 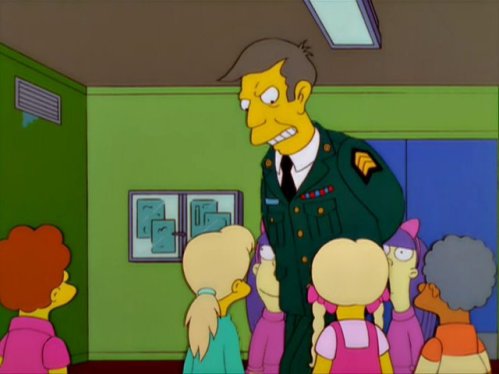 But that night Bart decides to rebel a little bit, and goes into some sort of delivery chute in the kitchen to start digging a tunnel. But while that’s going on Homer and Ned are still driving to the school, listening to Bad Company and driving like idiots, until Homer crashes into a fire hydrant, and they get trapped in a blast of ice, getting them stuck for the night so they can huff fumes.

And while Homer and Ned slowly asphyxiate we see that Skinner has woken up in the middle of the night, only to see Bart’s tunnel. He freaks out and heads over to the tunnel and grabs Bart, waking everyone else up in the process. And everyone’s pretty impressed. They all suggest completing to tunnel and escaping, but Skinner gets mad and decides to collapse the tunnel so no one will get hurt, and ends up getting stuck himself. At which point Bart takes over, and decides to let the kids run wild.

They somehow get Skinner out of the chute and get him tied up inside a dodgeball sack as they begin to mess with him and party their little asses off. And man does Bart seem to love this, taking full advantage of picking on Skinner, making him climb ropes, and whipping him while quoting the Deer Hunter. The kids even use Skinner’s keycard to get into the permanent record room so they can wreck havoc on the holy records.

And while the kids are busy doing that, Skinner sneaks into the science room, grabs Nibbles the hamster, sticks him in a ball with a note, and sends him out to get help. And shockingly, Nibbles does great! He somehow manages to smash into the windshield of Ned’s car, waking them up from their fume come, and giving them precious oxygen. It even gets the car to free itself from the ice, and the dads gets back to their mission.

Unfortunately Homer’s an idiot, and lets the car just start steering itself with cruise control, and they end up smashing into the cracker factory, where the car plows into a giant salt silo. Which turns out to be a good thing, because the silo ends up falling down a hill, hitting the Elementary School, and freeing them from the snow. So everyone’s free! And after Superintendent Chalmers shows up and makes it clear that he doesn’t care what happened, Skinner and Bart agree to never talk about what has happened here, and everyone lives happily ever after. 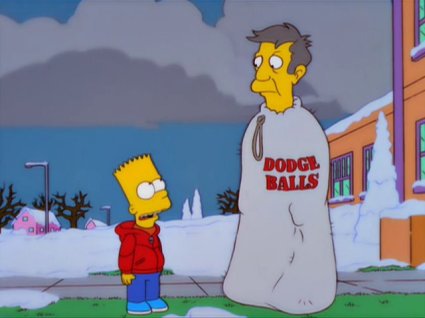 I kind of adore this episode. It really could be because of nostalgia, because this was an episode that I saw a whole bunch on TV when I was younger, and me and my middle school buddies thought this episode was hilarious. And honestly, I still kind of did, so I’m not sure if that’s proof that I’m looking at this episode with rose-tinted glasses or if it’s legitimately a funny episode. But who cares, I enjoy the hell out of it. It was similar to “Das Bus” with the kids going crazy, but with the added spice of having Skinner to rebel against, and it lead to some great stuff. Plus, that Homer and Ned stuff was great, I’m always a fan of the two of them palling around. It was a fun episode, and sometimes that’s all I need.

Take Away: Don’t trust blizzards, they can turn on you and completely ruin your day.

“Skinner’s Sense of Snow” was written by Tim Long and directed by Lance Kramer, 2000. 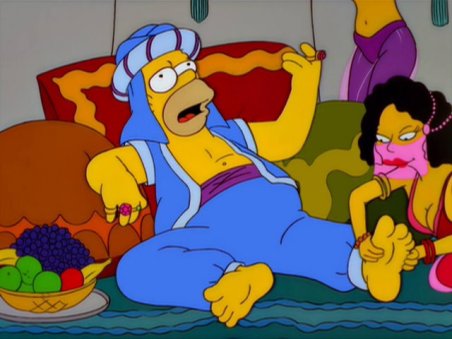 Tagged as: 2000, Lifetime of Simpsons, Season 12, Skinner's Sense of Snow, the Simpsons