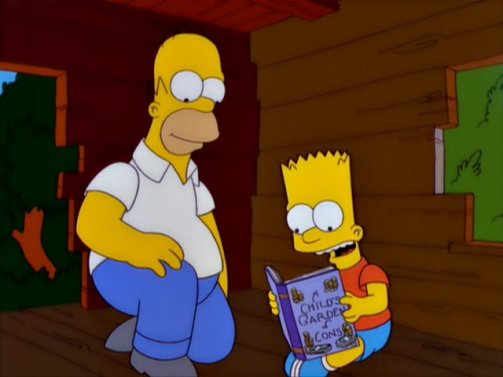 Hey look everybody; it’s the episode I always assume “the Grift of the Magi” is! Let’s watch!

The episode opens up with the family going to the Magic Castle, I guess the one in Los Angeles? Whatever, they get there and prepare to have drinks and watch some magic tricks. However, things start poorly right from the beginning when their mentalist waiter guesses that Marge wants a Long Island Iced Tea, and because she doesn’t want to be rude, she starts draining them down, getting increasingly drunk. Who doesn’t love drunk Marge?

So Marge gets more and more drunk, heckling the magician until he just can’t take it anymore, and gets her to come up and participate so she’ll just shut up. Which obviously entails a ball-gag. And after failing through some tricks, the magician moves on to his main trick, and puts Marge in a series of four guillotines, and drops the blades down, where she promptly turns into four chimpanzees in Marge dresses. Which is actually a solid trick. And it’s even better when she comes out of a giant banana, and gets attacked by the chimps.

But we’re not going to worry about Marge’s new monkey PTSD, so the plot moves on with the family visiting a gift shop, and Bart buying a magic kit to learn some tricks on his own. So the family head home with Bart bragging about his new kit, and the car is promptly hit by a goddamn sturgeon. The family run out of the totaled car, and puzzle over the mysterious fish, as we learn it apparently fell to Earth from some Russian cosmonauts on MIR. 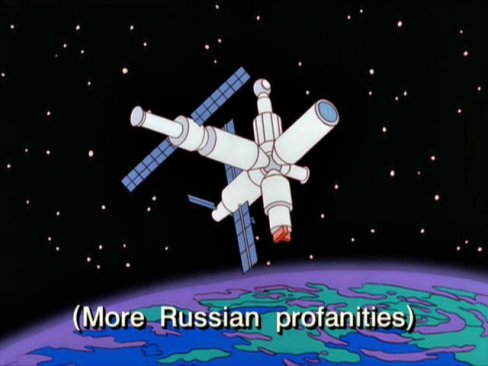 So Homer heads to an auto-body shop to get the car fixed, leading to one of my favorite Simpson’s quotes of all time, “Well there’s your problem.” Unfortunately the mechanic says that it’ll take $6,850 to fix the car, so Homer’s screwed. But Bart has an idea! He says he’s good enough at magic already that they could head down to the Squidport and busk for some money. Which doesn’t go well. They barely make any money, and Homer ends up yelling at Bart in public, and then leaving him there alone.

But it turns out that that was a good thing, because the people on the Squidport start to feel bad for Bart, and end up giving him a whole lot of money. So he heads home, makes up with Homer, and they hatch a plan to start scamming people out of money to balance out the universe, which has punished them with the car thing. So with that minor justification the two get a book on grifts, and head out to scam their friends and neighbors for money.

First they frost a pillow and convince Kent Brockman that he ruined a blind Bart’s birthday cake, then somehow scam Dr. Hibbert into buying Santa’s Little Helper from Homer with a mustache for Bart, since he somehow doesn’t recognize either of them. And things are going great, even to the point that they end up paying off the car, and then some. But they’re into the grift now, and decide to keep going, despite fulfilling their pathetic justification.

And after a failed grift on Ned, the two run and hide in the treehouse, where they’re shocked to see Grandpa. Turns out he’s onto them, and is a big supporter of grifting, he even wrote that book they’ve been reading. And with Grandpa’s influence, they decide to do one huge grift on the old folks at the Retirement Castle. Homer and Bart show up, pretending to be from Publisher’s Clearinghouse, and give Grandpa the giant check, only for him to have a fake heart attack and die. They then convince the other old people to give them a hundred bucks each to sign over the check. Easy! Until one of the old people turns out to be undercover FBI.

The agent arrests Homer and Bart as Grandpa flees, and he takes them to the police station. However, Homer’s able to convince the agent that they should go in by themselves, to try and get a shorter sentence, so Homer and Bart go in, and get Chief Wiggum to let them into a cell. Unfortunately it turns out that agent wasn’t legitimate, and he just steals their car and cash, and flees. So with no other alternative, Homer and Bart head home and tell Marge and Lisa that they got carjacked by a hairy foreigner, explaining where the car went, and then go to sleep so they don’t have to answer questions.

But Marge and Lisa don’t give this weird explanation up, and when Homer wakes up he finds that they somehow got Groundskeeper Willie has been arrested for their fake carjacking. Which obviously means it’s time for a trial! Homer serves as the chief witness in the case, and just keeps accidently implicating Willie in the crime, until he’s finally found guilty. But Willie doesn’t want to go down easy, so he grabs a gun and starts shooting, until he kills Principal Skinner.

Psych! Turns out it was all fake. Once Skinner is dead and Home finally admits that it was all bullshit, everyone stops freaking out, and explains that the whole thing was a trick on Homer and Bart. That fake FBI agent was an actor, and everybody (except Willie) was in on the plan to just trick Homer and Bart into stopping grifting. Which is insane, but before Lisa can explain that this plot makes no sense, Otto runs in, yells “Surf’s up!” and everyone goes out to the beach to surf! 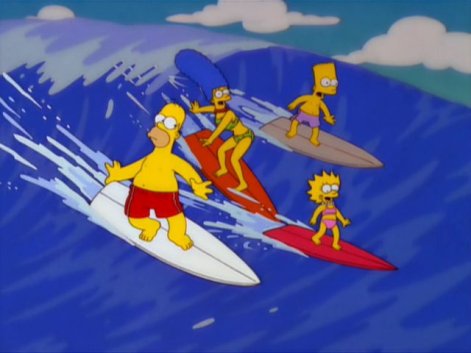 This is a very stupid episode, but I like it quite a bit. I’m always a fan of Homer and Bart being little buddies and doing something stupid together, and this is one of the better examples of that. I love that they decide to just start screwing over everyone with barely any justification, and then keep going well after that justification has been met. Plus, the ending is hilarious. It’s basically the same joke as “Dad Bus,” by just having a voiceover tell us Moe fixed everything, and I really like it. Just dropping everything and having a wacky surf-montage is hilarious, and really the only way that this episode could have ended without an elaborate explanation on why everyone helped trick Bart and Homer.

Take Away: Grifting is super easy, but you shouldn’t do it, otherwise your family will stage an incredibly elaborate intervention. And watch out for Russian space-debris.

“The Great Money Caper” was written by Carolyn Omine and directed by Michael Polcino, 2000.

Tagged as: 2000, Grifting, Lifetime of Simpsons, Season 12, The Great Money Caper, the Simpsons