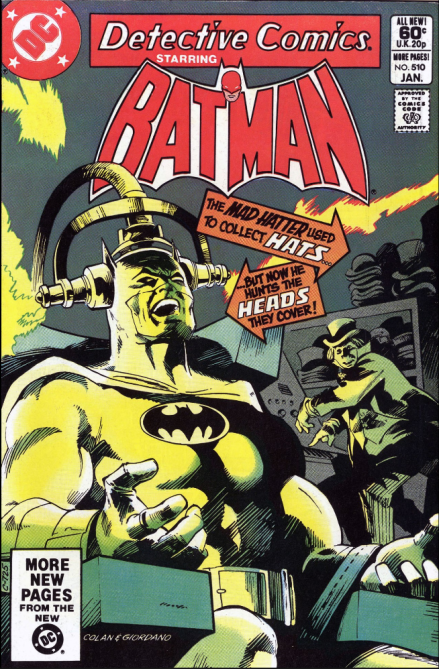 Batman rogue’s gallery bingo continues here on Bat Signal as we get to a super crazy 80’s issue with none other than Jervis Tech the Mad Hatter. Now, I didn’t do a lot of research on this issue, which makes some bizarre claims about the Mad Hatter that I didn’t feel like substantiating, but suffice it to say, I don’t know much about the Mad Hatter. Which I don’t thin is a really bad thing. He’s not the best. But hey, at least he’s going to try and electrocute Batman in this issue, unless we have some bullshit going on where the cover has absolutely nothing to do with the actual plot. But we’re getting ahead of ourselves, let’s just sit back and enjoy a story where the menace of the Mad Hatter is barely more palpable than a contentious mayoral election.

The issue opens up with Batman awkwardly lurking in the shadows outside some sort of outdoor debate between the two candidates for mayor. We have Councilman Arthur Reeves who is running on a strict anti-Batman platform, and Hamilton Hill who is running on a strict anti-Commissioner Gordon platform. These appear to be the only issues. Anyway, I guess Batman is just hanging out up there to make sure nothing goes down during the debate, as is Gordon, which is probably smart since they are in Gotham City after all. Anyway, the candidates are yelling at each other about how they want to hunt Batman down or make Gordon resign, when Batman notices some thugs robbing a store, so he does what Batman does and jumps down to tackle them, right in the middle of the audience. Which is probably not the thing to do when there’s a man ranting about how Batman needs to be controlled. But whatever, Batman stops the guy, proves that there was a reason he was there, and totally shoots down the Reeves dude by making fun of the fact he thinks that a Councilman can arrest someone.

After that sick burn Batman takes off, since I guess no one else will commit a crime in the area that night? Whatever, we get to see some inner monologue between the two mayoral candidates, where the pro-Batman guy laughs to himself that his opponent made such a mistake, and the anti-Batman guy thinks about how he has something that will take Batman down and win him the election. But we don’t have time to worry about that, because we then cut over to the Wayne Foundation where Lucius Fox is staying up late and working on some sort of computer that can predict whether the company will be profitable. But as he’s working the screen starts to shift, and his spreadsheets take the form of a top hat, and then the computer explodes, knocking him unconscious. And as he’s knocked out, the Mad Hatter and his goons show up to kidnap him.

Meanwhile, Bruce Wayne is taking a shower and thinking to himself how great it was to get a full night sleep. At which point Alfred shows up to let him know that his friend and business partner has been partially blown-up and kidnapped. Way to wreck the mood Alfred. So Bruce gets dressed and heads down to the scene of the crime where he meets with Gordon. The two check things over, Bruce finds some sort of weird gadget attached to the computer that made it explode, and they talk. Then someone finds a business card that says Head Hunter Inc, with a phonenumber and a picture of a top hat on it, so they decide to give it a call, and Bruce talks to the Mad Hatter, who lets Bruce know that he has Lucius and is going to ransom him back for two million dollars.

Oh, and there’s a monkey

So Bruce agrees about the money, and they make a plan to have it transferred to an account at the bank. But Bruce isn’t going to let it go this easily, so he leaves Gordon and starts doing some detective work sans Batman. He checks out some local electronics stores, trying to find to the one that sold the gadget that blew Lucius up. And after several tries he finds the right one, and the clerk tells Batman that the guy who bought it bought a bunch of other weird bio-feedback devices and had them all sent up to a closed down restaurant in town. And with that clue, Bruce has it figured out, and runs off.

Meanwhile, we find out that the Mad Hatter has created some sort of brain-draining device, and has hooked Lucius up to it in order to steal all of his business knowledge. So he’ll sell Lucius back to Bruce, but as a brainless husk. That’s nice. But as the process is about to begin, Batman comes swooping in and fires off a flare to blind Mad Hatter and his goons. Batman starts whooping all the goons asses, except one who wasn’t looking and still has his sight. But Batman still ends up kicking that guy’s ass, and then moves on to the Mad Hatter. Unfortunately the Mad Hatter has gained back his sight, and is threatening to brain-drain Lucius again. So Batman does the only thing he can, and offers to trade places with Lucius. The Hatter obviously agrees to this plan, and hooks Batman up to the device, ready to steal all his thoughts. Oh, and Mad Hatter starts talking about how he’s only dealt with Batman once, and every other time it’s been an imposer, which I guess is true? But when Hatter turns the device on, it ends up not working, and Batman is able to bust out of the machine and beat him up. We then learn that Bruce had figured out that Hatter was building some sort of brain-draining machine because of what that clerk said earlier, and wore a rubber cap under his cowl, which I guess block brain-drain rays? Sure. Oh, and that evil Councilman from earlier says he has photos showing who Batman is, but I guess that’s a story for another time!

This issue wasn’t bad or anything, but it didn’t do a whole lot for me. I loved seeing that Gene Colan did the art for the book, I didn’t realize he did any DC work, and it was interesting to see the Mad Hatter for the first time, but the issue just didn’t click for me. The mayoral stuff was kind of interesting, but it was clearly a plot that had been going on before this issue, and would be going on for a while after it, so it didn’t really go anywhere. And I never realized that there were two Mad Hatters running around. That seems odd. Especially the idea that his one hadn’t been seen since the 50’s, and was just randomly showing up in the 80’s instead of just taking the other guy and making him more menacing or something. I don’t now, it had a lot to like, such as Bruce doing detective work on his own and not wearing the costume, but overall it was kind of a dud.

“Head-Hunt By a Man Hatter” was written by Gerry Conway and penciled by Gene Colan, 1982.