You know what one of the biggest harbingers of the show’s declining quality has been? A severe lack of Mr. Burns. Back in the Golden Age we were getting two or three great Mr. Burns episodes a season, and yet the last few seasons have been practically devoid of them. Which is a serious bummer. I love Mr. Burns episodes. So of course I was going to be pumped about this one, even if it’s not exactly the best. It’s an oasis, guys.

The episode begins with the family having a nice dinner at the Singing Sirloin to celebrate Bart’s first ever A. Which is ridiculous, as Lisa points out, but whatever, they needed a reason to get them in a fancy restaurant. And the test Bart aced was an astronomy test because he got trapped in a closet while Skinner and Krabappel were having sex in the classroom, leaving him with no other choice but to study the planets. That’s lovely.

But this isn’t an episode about Bart’s severe mental anguish from listening to two adults he knows have sex, it’s about how the Simpson’s are poor, as shown by their credit card getting declines at the end of the meal. Homer then tries to have the family dine and dash, but they’re caught and forced to perform mariachi songs to work off their debt. And after that fun little interlude they head home, depressed that they’ve become the bottom rung of Springfield’s society.

Which of course means that the Simpson’s need money. So they head to a financial planner, Lindsey Naegle of course, and they basically learn that they don’t have enough money, and that they need more. Great job Lindsey. Anyway, after fleeing from that meeting to avoid paying for it, Homer and Marge start brainstorming ways to get more money. And just on time, we cut over to Mr. Burns’ office where Smithers is announcing that he’s taking a brief leave of absence to star in and direct a play he’s written about Malibu Stacy. So Mr. Burns is left alone. And no, Homer isn’t becoming his assistant again.

Instead Burns just starts wandering the Plant, not sure of what to do with himself with no Smithers, and happens to walk into the cafeteria right as Homer is working up the courage to ask Burns for a raise. We also get the amazing joke of Carl using a word of the day calendar to use the word “concur” in a sentence, even though we see that the actual word he’s looking at is “conquer.” I love that joke.

Anyway, Homer goes and chats with Burns, who isn’t that receptive about the whole raise thing. That is unless Homer can make Burns laugh. And obviously Burns isn’t the type of guy who is going to be into jokes, no, he wants Homer to commit pranks in exchange for money. First up, hucking pudding at Lenny! And it goes over great, so great in fact that Burns gives Homer a promotion to his own personal “Prank Monkey,” and they get to work pranking Springfield.

The pair hit the town to begin their pranks, and the first stop is the Android’s Dungeon, where they play the hilarious gag of having Homer buy a mint condition Spider-Man #1, only for Homer to eat it in front of Comic Book Guy. Solid prank guys. Next up is a trip to a baseball stadium where Homer heads into the men’s room, strips down to his underwear, and asks the other guys to change him, because he made a “boom boom in his dipey.” Awesome. Oh, and we briefly check in on Smither’s terrible play, which looks terrible.

And things are going great for Homer, he’s flush with cash and is making it rain on Dr. Hibbert to vaccinate the hell out of the kids. But his happiness is pretty quickly is quashed when Mr. Burns reveals his next outlandish prank. They’re going to tell the Springfield zoo that they’re anonymously donating a female panda, dressing Homer up as said panda, and then laughing as the panda gets raped by the male panda. Hilarious!

But after some vigorous panda love, Homer sneaks out of the pen, and ends up getting spotted by Lisa, who is horrified. He spills the beans to her, telling her about all the horrible stuff he’s been paid to do, and she tries to convince him to get some dignity. Which is quickly put to the test when Burns shows up and tries to offer Homer more money, but he sticks to his guns and refuses to do his pranks any more. 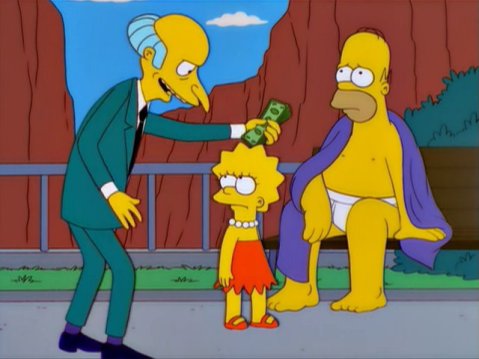 However, that does leave the matter of all the ill-gotten money, which Homer decides to do something altruistic with. So he heads down to the Costington’s department store and uses all the money to buy toys for needy children. Which is enough to give Mr. Costington the idea to have Homer be Santa Claus in their Thanksgiving Day parade. So Homer gets ready, learns his lines, and prepares for the parade!

And boy is it a lame parade. Springfield just doesn’t get any good floats and balloons, as demonstrated by the Rusty the Clown and Funk Winkerbean balloons. But everyone’s psyched for Homer/Santa. Which Mr. Burns decides to take advantage of. He shows up on his own float, and hops about Homer’s, offering him a whole bunch of money to do one last giant prank. But Homer sticks to his dignity, and refuses, letting Mr. Burns put on the Santa suit so he could huck buckets of chum on the happy children. But Homer’s okay. I guess that’s all that matters. 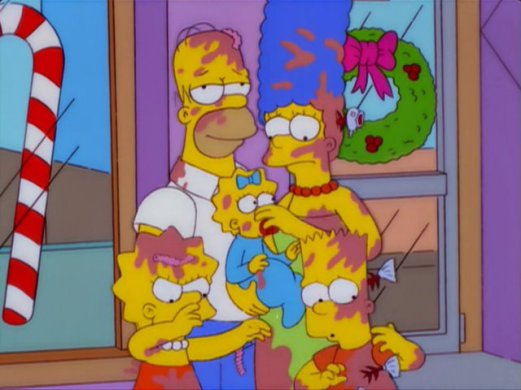 This is a pretty fun episode guys. I really love when Mr. Burns and Homer hang out together and goof off, and this is a prime example of that. I adore the idea that the only joy Mr. Burns gets out of life is pranking other people, which is spot on. Homer makes a great stooge for Burns, and their pranks are incredibly ridiculous. No one really learns anything in the episode, which is something that usually does happen at the end of a Mr. Burns episode, other than Homer realizing that he should have self-respect I guess. But just like a lot of the episodes that I’ve gotten lately, the moral is pretty undercut by the idea that everything needs to be a joke. I get it, it’s a comedy show, but I feel like we should have ended with a sweet moment between Homer and Lisa where they talk about dignity or something, not them getting splattered with fish guts.

Take Away: Don’t sacrifice your self-respect for money.

“Homer vs Dignity” was written by Rob LaZebnik and directed by Neil Afflek, 2000.

Tagged as: 2000, Homer vs Dignity, Lifetime of Simpsons, Prank Monkey, Season 12, the Simpsons