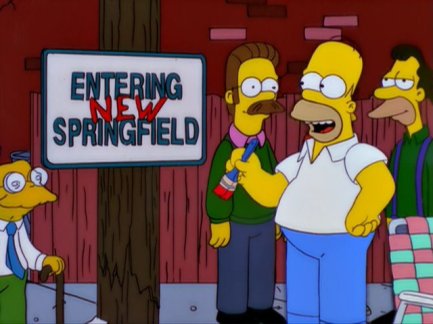 Season Twelve hasn’t exactly started with a bang. That Treehouse of Horror episode was pretty spotty, and after Season Eleven’s general lowering of quality, that kind of felt like some dark omens. But you know what? This week is pretty fun. Not incredibly great, don’t get me wrong I’m not thinking anything from this week really stacks up with Golden Age episodes, but hey, they’re pretty funny. There was nothing objectionable in any of them, and there are even some really great gags that I legitimately loved. So hey, let’s enjoy a pretty good week.

This episode starts off with Bart getting ready to feed Santa’s Little Helper out in his doghouse, when he makes a startling realization. Santa’s Little Helper isn’t in the doghouse, but there’s a really angry badger hiding out. Bart does his best to scare the badger away, with terrible results, so he goes to ask Lisa for advice. She obviously heads over to whatbadgerseat.com, which was a real joke-site that the Simpsons ran back in the day, and she suggests luring it out with stoats and birds.

And since stoats don’t come in cans, Bart tries to steal Rod and Todd’s pet woodpecker to feed to the badger. This doesn’t go well, so the kids sit around the doghouse, trying to figure out what to do. Which isn’t helped when Homer comes wandering over, before quickly deciding they’re wrong. “Badger my ass, it’s probably Milhouse.” Unfortunately the badger then mauls the hell out of Homer, and he realizes he needs to escalate thing.

So Homer goes inside and gets ready to call animal control. But something strange happens. An automated recording tells Homer that his call cannot be completed because of a problem with area codes. Apparently Springfield has added a second area code, and that knowledge is too much for Homer to handle. So he tells the badger to leave, because an A Plot has arrived, and he gets to work complaining about the area code. And after Homer loses out tickets to a Who concert, he just gets madder.

And that rage continues to simmer around town, until they finally have to do what Springfield always does, and hold a Town Hall meeting. Everyone piles in, sitting on different sides of the building depending on which area code they’re in. And because the people of Springfield are children, they decide to play a cartoon made by the phone company with Phony McRingRing to explain why they need area codes. And shocker, it doesn’t work. Homer starts to rile up the crowd, especially when he points out that all the rich people got to keep the old code, and starts a goddamn class war.

And things escalate quickly, because they rapidly evolve from class warfare to secession, as the new area code poor folks form their old town, New Springfield, while the rich people rename their town Olde Springfield. Homer is then promptly elected mayor of New Springfield, and the war is on. The two towns begin fighting over the stupidest thing, and intimidating each other in a way that just replicates the Springfield/Shellbyville rivalry.

But things really start to fall apart when Homer decides to sneak into the Plant and shut down all the power to Olde Springfield. This opens up a ridiculous prank-war between the two cities that just keeps escalating. The Olde Springfield rich folks commandeer a Duff truck headed to New Springfield, who then retort by shutting off Olde Springfield’s water, which unfortunately reveals a bunch of gold in their river bed which they use to buy the Evian water plant from France. Which makes Homer realize he needs to do something drastic. 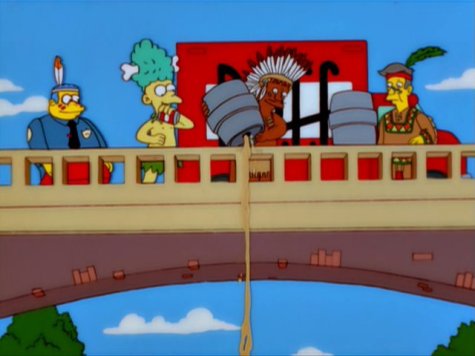 Building a wall. Since it worked for Berlin, Homer decides they need to wall off Olde Springfield and New Springfield, and gets the Mafia to build a massive wall out of garbage. Unfortunately he didn’t seem to run this by his citizens, because they freak the hell out when they realize that they’re sealed inside this insane town. So they all flee, leaving the Simpson’s the only citizens of New Springfield. But Homer has a great plan to win everyone back.

And this somehow works, because the Who then gets ready to play a show standing atop the garbage wall, only for the Simpsons. And back in Olde Springfield, people are starting to realize they’ve been screwed over. So the entire town mobs over to New Springfield to complain about the Who’s defection. At which point the Who realize that the whole problem is over area codes, and calmly explain that this doesn’t matter, and convince the two to reunite and move past this ridiculous plot. At which point Pete Townshend saves the day by playing “Won’t Get Fooled Again” so loud that it brings the wall down, letting the whole town dance together and heal. Just in time for an army of badgers to invade the city. 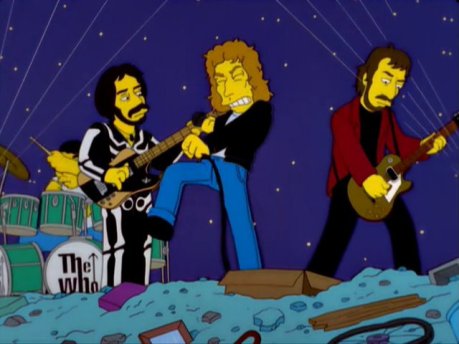 This is a really dumb episode, but I like it quite a bit. It’s probably some nostalgia, and a love for the Who, but this one holds up well for me. I really like the badger nonsense at the beginning, and pretty much all of Homer’s lines in that scene are amazing. “It’s a badger, all right. Possibly a griffin.” Great. And I really like the central premise of the town splitting in two, especially over an incredibly petty and easy to ignore issue, and then proceed to prank each other. That’s all solid. It’s obviously more in the cartoony side of things that the more classic episodes, because how ridiculous is it that Homer not only plans a secession, but then is elected as mayor, before walling off the town and declaring war? That’s crazy. But it’s fun crazy. And I feel like that’s something I’m going to be grasping for more and more.

Take Away: Area codes aren’t that big of a deal, but it’s super easy to secede.

“A Tale of Two Springfields” was written by John Swartzwelder and directed by Shaun Cashman, 2000.

Tagged as: 2000, A Tale of Two Springfields, Lifetime of Simpsons, Season 12, the Simpsons