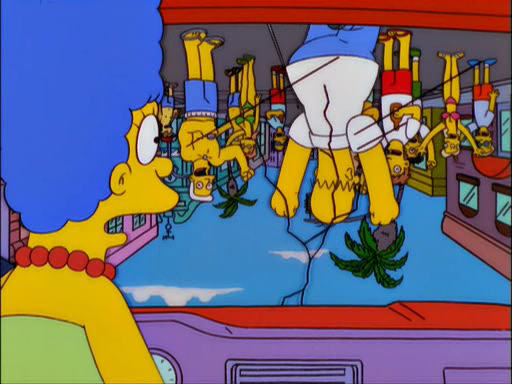 Hey everybody. We did it! We made it through Bummer Week! And I guess our reward is a week of wildly uneven episodes culminating in the beginning of Season Twelve. Yay?

The story starts off with Homer laying on the couch, paying Bart with Montana Militia money for delivering the mail to him. Sure, why not. And after Bart delivers the mail Homer finds that he’s gotten some new magazine full of quizzes. Basically a print version of those stupid Buzzfeed quizzes that your aunt shares on Facebook. And when Lisa makes the horrible mistake of telling Homer that he’s taking the quizzes wrong, and that he should go give other people the quizzes, he decides that he needs to be the Quiz Master!

So Homer puts on a bathrobe and a traffic cone hat and starts harassing his friends and neighbors. He gives Ned a sex test, which is in pretty poor taste since Maude just died. He also gives Lenny and Carl quizzes about being idiots. But it all comes to a head when Marge finally loses it after Homer asks her quizzes all night, and she tells him to take one himself. So he does, and takes one about figuring out when you’ll die. And he unfortunately learns that he’s going to die at 42. He only has three more years to live.

And this revelation isn’t going over that well for Homer. It quickly starts to destroy his life, giving him crazy anxiety and insomnia. He even starts to think that the Robert Evans in his TV is threatening him. But things really escalate when Homer shows up to work at the Plant, nude, wearing a sleeping bag, and nursing a plastic baby. And shockingly this is enough to make Mr. Burns force Homer to get help. So Homer sees a Plant psychiatrist, and is told to go get some rest and relaxation in Florida, America’s Wang. 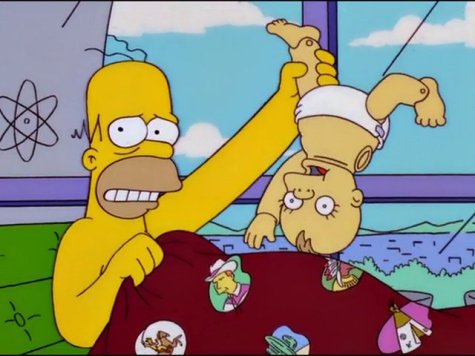 So Homer and the family pack up and head down to some sleepy little town in Florida to rest. However, when they get there they realize they should have done some research, because the little town has been completely overrun by college kids celebrating Spring Break. And manic Homer sure wants to participate! He escapes the car to go party, but Marge catches him and they end up tying him up in the hotel room to keep him safe and rested. Which obviously doesn’t work. Homer escapes the room and heads down to the beach to party!

So Homer gets to the MTV beach party, after a really solid Logan’s Run joke, and gets to see a performance by Kid Rock and Joe C. Lucky Homer! But things get even worse when Kid Rock is going to pour out a 40 gallon bottle of malt liquor, and Homer starts drinking it. This obviously results in Kid Rock and Joe C fighting Homer to the death. But Homer saved by some charming sheriff, who saves Homer and gets him back to the hotel just fine, where he’s given to Marge and the kids, who spent all day sight-seeing in the swamps and checking out some huge alligator who’s a local hero or something.

And shockingly, after this day of heavy partying, Homer’s finally able to sleep. His insomnia is solved! Which means he needs to party even more! Unfortunately he heads outside to get drunk, and finds that the college kids are all heading back to school, because Spring Break is over. And since he’s unable to believe that, Homer decides to make the family drive around the swamps in a fanboat looking for fun. Which they find when they run that damn gator from earlier over. 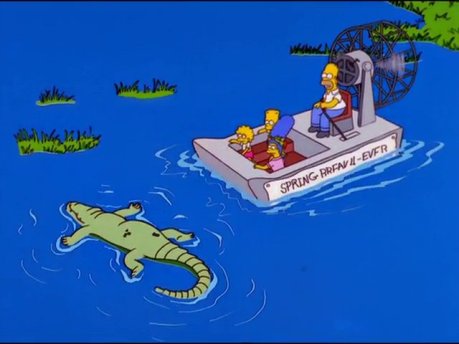 So that’s probably not good. And it’s worse when that sheriff from earlier shows up. Which is a problem, because it turns out he was only charming earlier because the liquor companies were bribing him, and he’s normally a real hardass. So he arrests the Simpsons for gatorcide, and is ready to bring them to prison. But they get lucky when he goes to get baby-cuffs for Maggie, and they’re able to escape.

The Simpsons get in a high-speed chase with the sheriff, and eventually get stuck on the front of a train after being on some tracks. The train drags them along the tracks all night, while the sheriff is stuck behind, and they end up crashing into the woods. The family crawl out of the wreckage, and immediately find some weird little diner in the middle of the forest, ran by some insufferable old woman who just keeps saying “I like that,” like it’s a joke. But she gives them jobs and a place to live, so that’s cool I guess.

And for a while they’re actually doing pretty well. The annoying old lady doesn’t care about their criminal past, and they’re enjoying simple country life. That is until the sheriff somehow finds them and arrests them again. So the family are put on a chain-gang breaking rocks, until they’re told they have to be waiters for some judge’s fancy party.

So the Simpsons and some other prisoners get to work at the fancy party, serving food and playing pianos. But they’ve finally had enough, so they make a little plan to escape, which involves Marge flirting with the sheriff while Bart steals his keys. And it works. Bart’s able to free Marge, Lisa, Maggie, and himself, and they all flee the party, while Homer’s still chained up. Unfortunately they get caught, and are about to be severely punished. Until that gator from earlier wanders out of the mansion, since he’s still alive I guess? At which point the Simpsons are freed and allowed to go back to Springfield, as long as they promise never to come back to Florida. Darn. 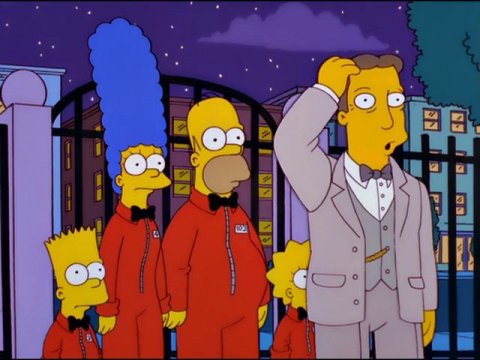 This is a rough one folks. I mentioned in the “30 Minutes over Tokyo” episode that it’s really hard to make episodes that revolve around the Simpsons going on vacation and insulting the culture they go to. More often than not it fails, and this was a big failure. The idea of Homer freaking out that he’s going to die isn’t that interesting, since we’ve already seen it a couple times, and I feel like a whole episode about him breaking down maybe could have been interesting? But instead they go down to Florida and deal with Kid Rock and gators. It’s just so weird. They don’t really wander around Florida that much to get jokes about the state, and the whole episode just feels too unfocused. It just goes all over the damned place, with like six plots in the episode. And that stupid old lady. This may be the first time that I’ve audibly groaned at a Simpsons joke on this project, which probably isn’t a good sign of the things to come. Just a turd, folks.

Take Away: Don’t go to Florida I guess? Or at the very least, don’t go to a Kid Rock concert.

“Kill the Alligator and Run” was written by John Swartzwelder and directed by Jen Kamerman, 2000. 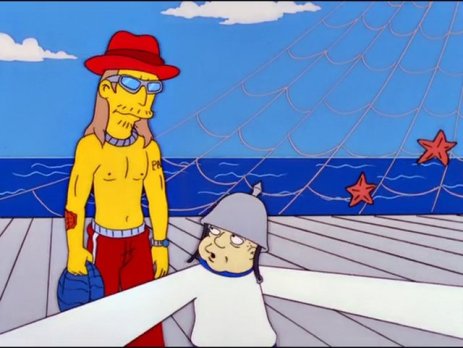 Tagged as: 2000, Florida, Kill the Alligator and Run, Lifetime of Simpsons, Season 11, the Simpsons