The BFG Delivers Some Much-Needed Joy 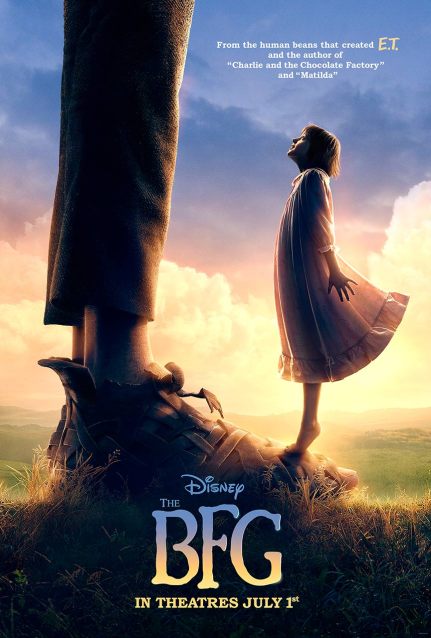 I’ve been a voracious consumer of stories for my entire life. A whole lot of this site has been devoted to me talking about how much I love movies and the Simpsons, but one of the more obvious sources of stories that I don’t talk enough about is novels. Obviously I talk quite a bit about the books that I’m reading right now, but I haven’t really dove deep into my love for the medium. It should be pretty clear, since I’ve discussed my goals of writing novels, but it’s something that can’t be over-stated, I love books. And that love affair started very early. Basically ever since I could read, I’ve been doing it as much as I could. My parents still love to make fun of that fact that I would spend most of my summer days sitting around on a couch reading books until they told me to outside and get fresh air, where I would promptly keep reading while walking around the back yard. It’s just a huge part of my life. And one of the foundational authors that really built my love of literature was Roald Dahl. That’s not really a shocking statement, I imagine every kid holds the works of Roald Dahl in a special place in their heart. But I really clicked with his stuff. They were fascinating little fables that managed to tell great stories, feature wonderful and unique characters, provide a simple and understandable moral, and yet also featured a wonderfully dark and twisted world. I feel like Roald Dahl was the gateway drug to Kurt Vonnegut, just some really out there stories that were doing things unlike anyone else. Yeah, I know that there’s some shitty stuff about the man personally, like some anti-Antisemitism, but that makes the guy lousy, not his work. And his work really affected me. And, shockingly, his works have been some of the most consistently well-adapted stories out there. There are a few stinkers, but most of the movies based on Roald Dahl’s stories have been pretty enjoyable. And when put together with Steven Spielberg, one of the true geniuses of film, there was little doubt that a film adaptation of the BFG was going to be great.

The plot of the film was extremely close to the novel. Which is a good choice, because it’s a great story. We follow a small girl named Sophie, an orphan in London who doesn’t really like her life. She doesn’t get along with anyone, and has terrible insomnia that keeps her awake all night, reading books an being lonely. That is until one night when she’s looking out the window around three in the morning, and sees a giant. She tries to hide, but the giant saw her, and apparently can’t let witnesses escape, so he reaches in the window, and grabs Sophie, before racing off into the English countryside, and traveling to the Land of the Giants. And once they get there, she’s brought into the giant’s house, and they begin to chat. He refers to himself as the Big Friendly Giant, and explains that he’s part of a race of horrible man-eating giants that sneak into England and kidnap people to eat. Except he doesn’t eat people. He’s the runt of the society, and the most civilized, and he only eats terrible cucumber-like vegetables. The BFG lives a lonely life, hated by the other giants, and unable to live in the real world. So he and Sophie make pretty quick friends, just chatting about their own loneliness.

But things really get cooking when the BFG teaches Sophie about his true calling. Because while the other giants are running around kidnapping people to eat, he’s giving people dreams. The Land of the Giants has a special area where dreams grow on a magical tree. So the BFG catches the dreams, listens to them to see what type of dream they are, and then heads into the real world and gives all the children happy dreams. So he and Sophie have a pretty good little life, until the other stupid giants come smashing into BFG’s house, picking on him and trying to find Sophie to eat her. And once they survive this encounter, they decide that they need to do something about the other giants. So they hatch an elaborate plot involving the BFG cooking up a potent dream for the Queen of England, warning her of the giants and telling her that she needs to listen to Sophie and the BFG. So they spring their plan, get the British government on their side, and launch an all out assault on the giants. The British military wins, the bad giants are abandoned on that island Luke Skywalker was hanging out on in Force Awakens, Sophie goes to live in the Royal Palace, and the BFG continues his work collecting and distributing dreams.

So yeah, it’s the plot of the BFG. Spielberg kept pretty close to the source material, and it was a good call. Did I love the movie? Not really. It was good. I really enjoyed myself watching it, and it’s clear that even a lesser Spielberg flick is better than most other director’s best works, but it wasn’t mind-blowing. I just think that the BFG works best as a novel. I’m not sure that it could ever really be adapted in a way that would work perfectly for me. But if there’s anyone who could do it, it was Spielberg. And he probably did the best job he could do. Besides wonderful pulpy adventure stories, I think one of the things Spielberg is most commonly associated with is wonder. He just understands how to capture beauty, childlike wonder, and joy in a way that no other director can manage. It’s a thing of beauty. And it’s on full display in this movie. We live in a pretty shitty world, with a whole lot of problems, and sometimes we just need some happiness and joy in out life. Some wonder. Some proof that things could be better and more magical. And that’s something this movie delivers.

And really, while the movie wasn’t perfect for me, there was one thing that really clicked with me. I loved the idea of the BFG as a storyteller, something I’d never thought about before. There’s a line in the movie that I think I was able to write down accurately, “They takes, so I blow my dreams about.” He’s referring to the other giants, and their taking of innocents. They make the world worse. And yet, the BFG does everything he can to make the world better. By giving people dreams. Stories. I may be reading way too into this, but the idea really struck with me. The BFG sees the world as a bad place, and knows that the only way he can help is to spread stories to people. And he’s even able to use stories to get things done. He convinces the queen to help them with a dream he crafts, and is able to subdue the bad giants with a nightmare he creates. That’s the power of dreams and stories. They can be used good stories, or bad stories, but they have an effect on people. And it’s the most important thing in his life. And it’s exactly why I love storytelling, and consider it one of the most important and meaningful things a person can do.

The BFG was written by Melissa Mathison, directed by Steven Spielberg, and released by Walt Disney Pictures, 2016.