Swiss Army Man is Unlike Anything I’ve Ever Seen

One of the biggest complaints about Hollywood is that there’s no originality anymore. People like to make fun of that fact that all Hollywood seems to be able to make is superhero movies, bad Nicholas Sparks romantic comedies, poorly thought out biopics, and all manner of terrible Michael Bay drek. But that’s not actually true. Yeah, a lost of stuff that comes out can easily be put in those categories, but there’s still a lot of interesting films coming out. You just have to look for them. And guess what I found! One of the strangest, most beautiful movies I’ve ever seen. And it’s all about a farting corpse! That’s right, I checked out Swiss Army Man at a sneak peak this week and it was really fantastic. When I first heard about the movie I felt like it was a joke. Some weird little indie comedy where a man stranded on a deserted island finds a farting corpse that teaches him how to live life again? There’s no way this movie was real. But then it was, at which point I switched my thoughts over to the idea that there was no way this movie was going to be any good. And yet, I just kept hearing great things about it, so I decided to give it a shot. And it’s great.

The plot of the movie is actually pretty simple. We meet our hero Hank (Paul Dano) trapped on a deserted island, preparing to commit suicide rather than survive alone any longer. That is until he notices a corpse has washed up onto the shore of the beach (Daniel Radcliffe). At first he freaks out, assuming another person has made it to the island to be with him. But then he realizes it’s a corpse, and he gets depressed again. Until he also realizes the corpse has some sort of superhuman farting abilities, which he’s able to harness as a jetski to freedom! And that’s just the pre-title sequence!

Once they’re done jetskiing through the ocean, they end up on some sort of mainland, albeit trapped in a forest. So Hank gets ready to find his way home, with no food or companionship, when something miraculous happens. The corpse comes back to life. Sort of. It’s never entirely clear if the corpse is really alive again, or if it’s all in Hank’s head. But that doesn’t really matter, because the corpse has awoken, named itself Manny, and is going to help Hank get home. And that’s kind of the rest of the movie. Hank and Manny slowly but surely make their way home, while Hank tricks Manny into thinking that a beautiful woman on Hank’s cellphone is the love of Manny’s life, and they just kind of learn about life. When Manny came back to life he didn’t really come back with any knowledge about the world. So while they make their way through the forest they have chats about life, love, loss, and friendship. Now, I know I usually break down the plots of these movies completely, but since this was a sneak peak, and because the plot twists that end this movie are so amazing, I don’t want to spoil it all. Go check it out, it’s a great film, and just rest assured that the film ends with a character asking “What the fuck?” 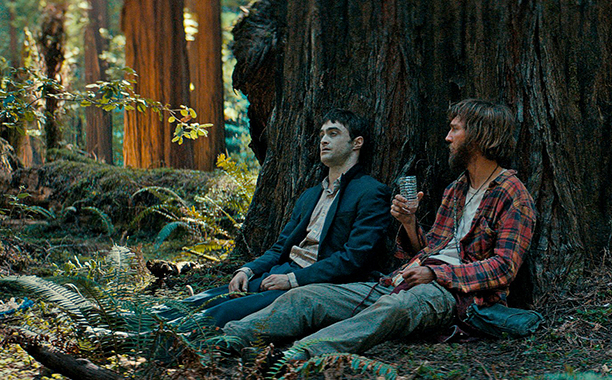 Now, I don’t know about you, but I wasn’t anticipating a whole lot from this movie. I figured it was going to be just a stupid little absurd comedy. The trailer didn’t show much plot, and was basically just showing up the farting corpse gags while showing off the movie’s odd Michel Gondry-esque visuals. It looked a little twee to me. But as I was watching the film, I was honestly blown away. Now, since I started this site I found that while I’ve been watching movies I’ve been keeping an eye out for a specific theme that I could discuss. And I was shocked that while watching Swiss Army Man, I couldn’t narrow down on a theme. And that’s not to say that this movie didn’t have some sort of over-arching theme, it had like five. Which seems like it should make for a muddled and insane movie that didn’t hold up. But somehow, the movie clicked while tackled incredibly diverse topics.

There are a couple interesting idea bouncing around in this movie, including the idea of America throwing away broken people, how broken people often find each other to help each other, and the crippling power of loneliness. Those are all fascinating themes for a movie to tackle, but there are two other ones I want to focus on. First up, fatherhood. What’s that? How could a movie about a man and a farting corpse being trapped in the woods have anything to do with fatherhood? Well, like I said, when Manny comes back to life he’s kind of a blank slate, which causes Hank to teach him about everything. Which seems great at first. Hank is able to teach Manny every little thing about the world around him, and it’s a lot of fun. I’m not a father, but I bet teaching them all the cool stuff you’ve learned is a blast. However, things also get rough, because while it’s fun to teach your kid the cool stuff, it’s not as fun teaching them the hard truths of life, and that you can’t do everything you want. There are highs and lows to raising children, and this movie was oddly an interesting little fable leaning on that topic.

But the main thing that I took away from this movie, and the lesson that I was most shocked to see from it, and it’s that life is worth living. We don’t really learn anything about Manny’s past, but over the course of the film we learn a lot about Hank, and the biggest thing we find out is that he’s wasted his life. We don’t know how he ended up on the island, but it becomes abundantly clear that there wasn’t much going on in his life before the island. He was lonely, repressed, and was just drifting through life. He had crippling social anxiety, and was afraid to do anything. But when he finds a true friend that doesn’t judge him, and won’t leave him, he realizes that maybe there’s more to life than just managing. Hank realizes that life exists to be lived, not survived, and even though the ending takes everything to a very strange and uncomfortable place, the film as a whole was a testament to the power of life. Which is pretty beautiful. Movies get so bleak sometimes, and we’ve becoming conditioned to think that bleakness equates maturity. And yet, against all odds, this movie about a farting corpse delivered one of the most mature morals I’ve seen in a movie in years. Live you life. Be yourself. Be happy.

Swiss Army Man was written and directed by Daniel Scheinert and Daniel Kwan, and was distributed by A24 Films, 2016.