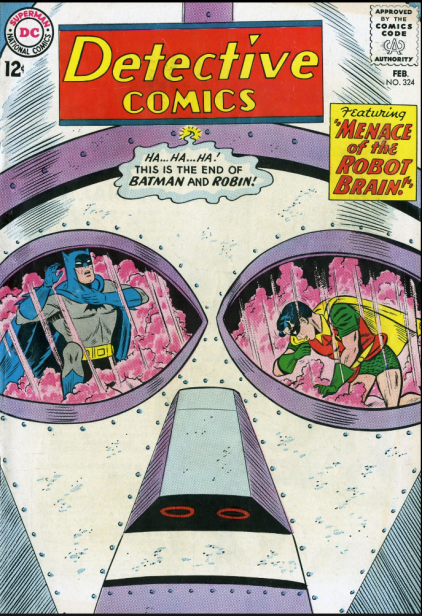 After last week’s installment of Bat Signal where we kind of broke the rules and focused on an issue that barely had Batman in it, it’s nice to get back to form and have some crazy-ass story where Batman and Robin run around doing their best to actually stop some crimes. I’m always happy when my random number generator pulls up an issue from the Golden and Silver Ages, because man are they fun. I just can’t believe that there are people out there who would rather read stories about Batman being angry and violent, beating the hell out of criminals, when stories like this exist. Superheroes should be escapism, at least to me. They’re mythological figures. So why shouldn’t I prefer a story where Batman and Robin fight a literal Robot Brain? That just makes sense to me. Although, I was a little disappointed that this wasn’t that other robotic brain that fights the Doom Patrol. You know, the one that’s in a relationship with a French monkey with human intelligence? Man, Doom Patrol is weird. But that’s off topic! Let’s talk about Batman and Robin getting stuck inside a big head.

The issue starts off, oddly enough, with Bruce Wayne and Dick Grayson in court, posting bail for a friend of Bruce. The guy’s name is Dan and he’s been charged with stealing diamonds from his work. They were in a safe which only Dan knew the combination to, and the only explanation is that he stole them. The only problem is that he has no memory of it. So Bruce and Dick bail Dan out and take him home, promising that their friends Batman and Robin will pay Dan a visit to work the whole thing out. But the next day when they’re heading over to Dan’s, a new crime gets their attention. A driver for an armored car company has suddenly gone crazy and stolen one of the cars full of money. So Batman and Robin change plans and start chasing after the armored car, which quickly turns into a whole thing, because they’re crossing over a bridge that begins to rise right after they’ve crossed. Which obviously means Batman and Robin have to pull a Blues Brothers and drive right off that ramp.

As you can see above, the Batmobile didn’t exactly make it over the bridge, but Batman and Robin somehow make it over the ramp, and tackle the two men who were operating the bridge. And once the men are tackled, Batman says that he’s going to arrest them for some “good strong questioning,” which sure sounds like torture to me. Anyway, they get the goons to the police station, where they start to spill the beans. Just like Dan, they can’t remember why they raised the bridge. All they remember was that they talked to some man with glasses and a waxed mustache and he told them to do it. And the clues just keep coming in, because as soon as they get that little tid bit they hear that the driver of the armored car has been found wandering the streets, also with no memory. So they go talk to him and find that he too saw this bespectacled man. So obviously they head over to Dan and find the exact same story from him. They also remember that this mysterious man has been taking pictures of all of the men before they lost their memories.

So with Dan’s help they get a police sketch-artist to make a drawing of this mastermind, and he ends up looking real bizarre. But they have a lead I guess, so they get to work tracking down this guy. And while that’s going on we cut over to glasses man himself, Ernst LaRue, who is explaining his plot. He’s apparently invented some sort of mind-control camera, and has been wandering the streets of Gotham, taking photos of people that have access to expensive things, and then taking over their minds to commit crazy thefts. Oh, and he’s also living in a crazy building in the middle of the woods shaped like a giant robot head. You know, like a non-criminal. 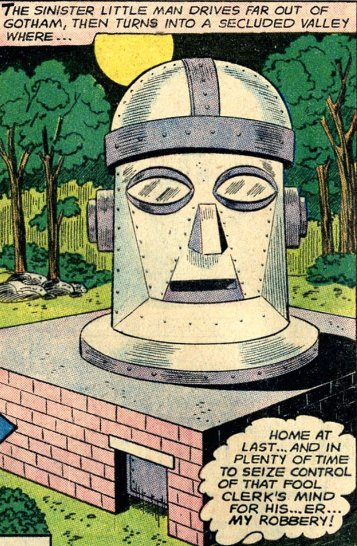 Seems legit. Anyway, LaRue’s next target is the owner of some sort of antique coin store, and now that Batman and Robin know who they’re looking for, they’ve caught him. The police saw LaRue taking the photo of the coin man, so the next day Batman and Robin show up to tail him, assuming he’d bring them to LaRue’s headquarters. Which works. They see the coin guy wander into the mouth of the giant head with a briefcase full of booty, and then leave. So before the giant mouth closes, they jump inside, hoping to find LaRue. Unfortunately when they get inside the mouth closes, and the robotic tongue they were standing on starts to flip them down into the robot’s throat. Where they’ll be…digested? I don’t know, it doesn’t matter, because Batman’s able to use his cape to cling to the tongue and save themselves. So once they’re safe they climb back onto the tongue, and open a door that leads further into the head.

They get into an open room, which triggers another trap, sending them flying into two different sealed compartments, in the robot’s eyes. At which point they get sealed in again and some toxic gas begins pouring in. You know like eyes? Batman springs into action and sticks some special nose-filter plugs into his nose, sure that that will solve the problem. Oh, except Robin totally forgot to bring his. Whoops! Well, Robin’s dead. Nah, Batman has him lay down close to the ground, and gets to work burning his way through the door with a little blow-torch. So Batman gets Robin out of his little eye-cell and they storm into the brain of the robot to find LaRue, who is pretty terrified to see them. But he has a slight contingency plan, and gets out of the head through the trap-door in the nose, but not before setting off some crazy alarm that bombards Batman and Robin with annoying noises in the hopes that it will drive them crazy. But as soon as LaRue escapes, he suddenly has an overwhelmed urge to stop the annoying sounds, because surprise surprise, Batman and Robin used the stupid mind-controlling camera on him, saving the day by using the villain’s own tricks.

This was a silly issue. It wasn’t particularly good, but it did remind me of some of the goofier installments I’ve come across, like that crazy Box issue. The idea of a mind-controlling camera recording people’s “brain tapes,” and then being used to force people to steal stuff and return to your giant anatomically correct head fortress in the woods is one of the weirdest villain-plots that I’ve seen during this project and it was fascinating to read. Especially since this master criminal looked ridiculous, with a Salvador Dali mustache. The actual issue didn’t blow me away, since it just fell in that formula of Batman and Robin doing their best to show up and stop criminals, while failing, but there was a certain charm to it. I’m always a fan of a superhero trapped in a crazy death-trap, and this ridiculous Robotic Head of Death was pretty damned enjoyable. I don’t even think I understand why it existed. I think he was housing the technology necessary for the whole scheme to work in the brain of the robot, but the rest of the head seemed completely unnecessary, except for Batman-traps. Which I guess served their purpose. This’ll probably be one of the issues that I quickly forget, but hey, I had a good time reading it.

“Menace of the Robot Brain!” was written by Dave Wood and drawn by Sheldon Moldoff, 1964. 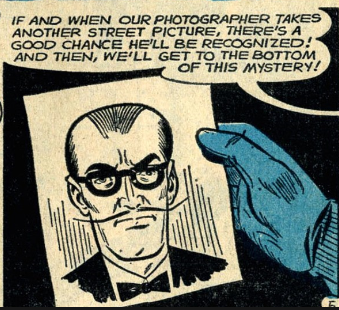 Yeah, there’s a “Good” chance no one else looks like this in Gotham.