Hey guess what everybody? I actually pulled a story this week that actually ends! No cliffhangers this week! Hooray! Plus, we get one of those installments of this series that I enjoy so much where we get our first appearance of a villain. Good old Mr. Freeze. Which he apparently only got named in this issue. I knew before this one he’d been called Mr. Zero, and even made an appearance or two before on the sixties Batman show with that name, but we just happened to pull the first time he had a bit of a naming crisis and got a new one. And I’ll say right off the bat though, this isn’t the Mr. Freeze that we know today. The Mr. Freeze of today was primarily shaped by the classic animated series of the 1990s. That show gave him his wonderful backstory, and added some much needed pathos to him. So let’s see what Mr. Freeze’s deathtrap is, and how Batman’s going to get out of that solid block of ice in the cover!

The story starts off with two different concurrent stories. First of all we get Mr. Freeze and his goons, racing around town for his first caper as Mr. Freeze. They pull a home invasion on a local rich guy named Clayton Woods in order to steal his recently acquired painting of a winter scene, because it’s important to stay on brand. And while that’s going on, there’s some health crises hitting Wayne Manor. Dick’s Aunt Harriet is having some horrible problem that requires immediate cryosurgery, which the book explains as surgery involving intense cold. Who’s Aunt Harriet? Well, she’s a character who was put in the 60s show to soothe weirdos who thought it was strange that three men lived in a mansion together. Anyway, we see Dick, Bruce, and Alfred waiting in the hospital while Harriet gets her emergency surgery. However, at the same time the cryosurgery is about to begin, Mr. Freeze is getting ready to use his cold-gun to break into Woods’ mansion and that somehow causes both cold instruments to short out. It doesn’t bother Mr. Freeze that much, since he apparently also has a heat-gun that he uses to melt his way through. But it’s a pretty big deal for Aunt Harriet, who is about to die if she doesn’t get the surgery in two hours.

And to make matters worse, the Batsignal is fired up once word of Mr. Freeze’s heist reaches Commissioner Gordon. So, even though a family member may be dying, Bruce and Dick have no option other than calling Gordon and seeing if this is really something that needs Batman and Robin’s attention. And when Gordon lets them know what happened, they decide to kill two birds with one stone, and catch Freeze while also stealing his ice gun to use in Aunt Harriet’s surgery. But how are they going to find Freeze? Well, turns out Bruce happens to know this Woods guy, and knows that that painting Freeze stole only got to America the day before, which he assumes means Freeze has tapped Woods’ phone. So Bruce calls Woods’ house, and starts talking about how it’s a good thing the painting Freeze stole was only a fake, and that the real one is at an Import Company. Then he starts prank-calling the house as several different rich dudes, saying the same thing, in the hopes that it will rile Mr. Freeze up.

Which works beautifully. So Bruce changes into his costume and jumps down a laundry chute to avoid suspicion, and meets up with Robin in the Batmobile. They then race out to that Import Company, and find Mr. Freeze and his goons breaking in. And it was at this point in the issue that I realized I’d never read a comic with Mr. Freeze in it before, and I hadn’t realized that the portrayal of him in the hilariously terrible Batman and Robin as a crazed pun-spewing madman wasn’t that far off. Because the ice puns start popping up like crazy around this point. Anyway, Batman and Robin start fighting Freeze and his goons, avoiding the blasts of the cold-gun while throwing sand on the floor so they don’t slip. But the tables are slightly turned when Freeze starts blasting all the weird bamboo stalagmites that are decorating the roof of the Import Company, causing them to fall on our heroes. Which doesn’t really end up being that big a deal, because they have some sort of “thermal units” on their belts, which give them a little aura of heat, which is enough to let them just punch them out of the air.

And after the weird bamboo trap is over, the Dynamic Duo rush Mr. Freeze, trying to steal his gun. Which ends up working well. Robin is able to grab the weapon, and then runs for his life, trying to just escape the building to get it back to Aunt Harriet while Batman deals with the villains. Freeze almost is able to catch Robin, since he has a space cold-gun, but Batman draws his attention, and starts fighting Freeze and his two goons all at once. Which doesn’t go that great. Freeze is able to turn on some setting on his gun and freeze the air around Batman, causing him to hold his breath rather than damage his lungs. And during that moment of weakness the goons are able to grab Batman. Freeze then switches off Batman’s little heat unit, and freezes him in a solid block of ice, like the cover. He then has his goons carry Batman all the way to the roof so he can pull a King Leonidas and kick him off.

Except he’s not! As the Batsicle is falling off the roof, he’s somehow able to smash out of the ice, and uses his grappling hook to grab onto a flagpole, saving himself. Batman and Freeze then have a hilarious scene where they yell at each other from the roof and the street, where Freeze demands Batman tell him how the hell he did that, and Batman refuses. Freeze then escapes, confident that Batman will have no way to find him in his secret hideout. Except, when he gets there, Batman’s already there, and he just beats up the goons, freezes them with the gun, and knocks out Mr. Freeze, winning the day, once again refusing to tell Freeze how the hell he accomplished such a feat. But we learn what happened when Bruce makes it to the hospital, and we find that Robin was able to get the spare freeze-gun to the doctor in time to save Aunt Harriet. Apparently Batman rewired his little heat unit before the fight, so when Mr. Freeze turned it off, he actually turned it on, so that’s how he escaped the ice, and he knew where the base was because he was able to trace the wire-tap. Yeah, pretty ridiculous, but it was also a story where a man has a freeze-ray, so I guess you get what you paid for.

So there we have it, our first Mr. Freeze story. And it had an ending! What a novel idea! I liked this issue quite a bit, and while I obviously prefer the more modern incarnation of Mr. Freeze, this was was pretty fun. He was a lot like all the other villains of this era, just obsessed with one stupid gimmick to a fault, but it was written in a fun way that didn’t get too tedious, like that ridiculous Penguin story I did a while back that used the word umbrellas roughly a thousand times. Freeze was fun, and the issue followed that tried and true formula I’ve been seeing from issues around this time period, with Batman and Robin just running around, trying not to be too late to find clues. Batman even did some detective work! Yeah, the ending with Batman just getting lucky and doing a lot of stuff off-camera was a little lame, but he was at least able to identify the wire-tap and mess with Freeze that way. That counts for something. And honestly, I really liked the stakes in this issue. I feel like Aunt Harriet’s purpose in the comics, beyond the aforementioned idea of having a lady in the mansion, was to just be in danger so the heroes could fix her, and while that’ll probably get tiresome as this project goes on, it was interesting this time. Seeing that Batman and Robin are actually fighting for something more personal than their normal battles was cool, and it worked well in this story. And the opening scenes where we switched perspectives between Freeze and his guys robbing the rich man’s house and Aunt Harriet’s failed procedure was really well done. Even though it makes no sense that Freeze using his gun shorted out the hospital’s cryosurgery device. But whatever, it’s comics. 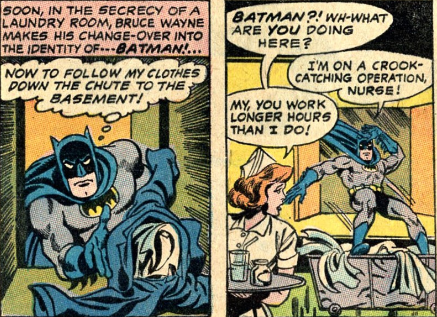